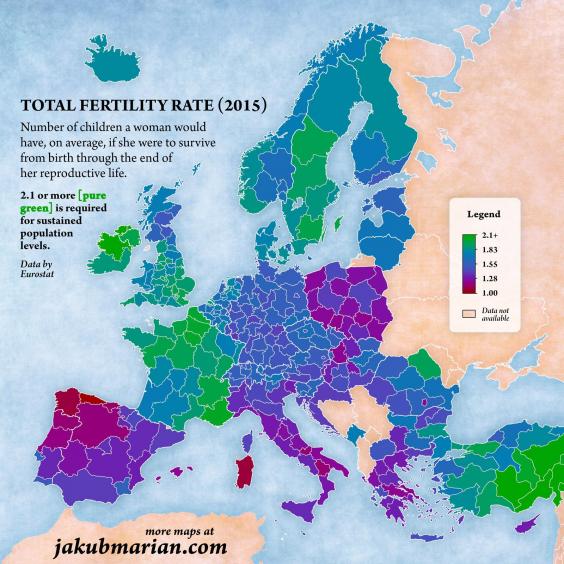 THERE IS NOT a single European (or western, for that matter) country with positive birth rate. This means that there is mathematical certainty that European people will disappear, if they do not change their behavior and have more children. This means that White people will disappear even if immigration is stopped, and therefore even Eastern Europe, which does not allow immigration, can not survive. Clearly, urgent measures are needed to stop this — more children, and a full stop of non-White immigration. Our ruling elites know very well about these numbers, but they decided to betray us, and “fix” the problem with more immigration. Bear in mind that the real birth rate of European women is actually lower, because the numbers here include the birth rate of Muslims, Blacks, Hindus, gypsies, and other minorities living in Europe.

Anything below 2,1 is not enough to sustain the population at stable level and leads to declining population. In the event of race mixing, you may need even higher numbers. Non-European countries, demographic groups or continents are added for comparison. Total Fertility Rates include those of minorities unless stated otherwise.

And after all of this….

Feminists Freak Out Over Italy’s Efforts to Raise Birthrate.

Italy’s Campaign to up Fertility Aborted Prematurely after Feminist Backlash.

“Although Italy’s birthrate is well below replacement level, radical feminists have attacked the country’s campaign to encourage women to have more children, comparing it to Mussolini’s Fascist government.

“It all sounds so similar to the fascist slogans of the 1930s, when posters on the walls incited women to give more children to the fatherland,” writes Annalisa Coppolaro-Nowell in Monday’s issue of the Guardian.

“Many cannot believe that a female minister has launched such a sexist, ageist, anachronistic campaign in a country where many other urgent problems remain to be addressed,” she laments.

The campaign, brainchild of Beatrice Lorenzin, Italy’s Minister of Health, attempts to address Italy’s languishing birthrate by reaffirming the “beauty” of parenthood, as well as offering financial incentives for parenthood.

The health ministry dubbed next September 22 as national “fertility day,” accompanied by a series of postcard-style ads advocating having children.

Feminists are having none of it, insisting that “choice” and “reproductive health” are the stuff that the the minister should be pushing, not the birthrate.”

The One Evil Group That May Destroy the World

Interesting how the only “white” country where it’s reasonable to assume that birth rate might really corresponds to white people is Ireland… (and this should still be put into question as the area which is greener corresponds to Sligo and Galway, where I understand there are a lot of Brazilians).

The French part above 2 is the area of Marseille. If you want to believe that is France… welcome to fool yourself (more than 30% of the population there are Arabs)

Obviously with its indigenous White population,
Iceland is left out of this PC BS because they
are White…and they are not European…but in
actuality…Polar! Whites are at home in the high
latitudes…not Jews and Muds!

Some thoughts that come to mind: 1) I think the population of Iceland have a serious endogamy problem 2) they are akin to Swede cucks. They started to demand their government to import Arabs (refugees) 3) I am white and Iceland’s weather… I think it is appalling, it attracts me zero. 4) I feel that living in an island is suffocating even if it is an isle as vast as Iceland. 5) if Bjork represents Icelandic people, something in her eyes/face doesn’t look white as, say, Whites in Denmark or Norway. 6) I am sure they import almost everything you can buy in their shops. I wonder where from. China? India?… 7) So sure I’d enjoy a (short) holiday there but in no way I’d want to live there! 8)… Read more »