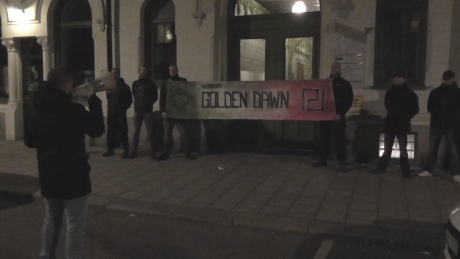 ON SUNDAY, activists from Next 1 gathered for a memorial rally in support of the fallen of the Golden Dawn. The rally was held outside the Greek embassy in Stockholm. On their banner you can read the words “We stand with the Golden Dawn.”

The activists met and then went jointly to the Embassy where they held up a banner and a speech was given by Joakim Blixt. The rally was carried out without interference from either opponents or police force and was deemed a complete success. Below are selected parts of the speech:

“Comrades, on this day two years ago, two young activists of Golden Dawn were shot outside their headquarters in Athens….

“The deed was a natural result of the incitement against Golden Dawn in both the Greek and the worldwide media. I think that a deed as this was expected by most people with any insight into Greek politics….

“The sick minds who control Europe intend to kill us and our people. Their ‘diversity’ and ‘democracy’ have been shown to be directly lethal to the native peoples of Europe. They will not be satisfied until the European population consists of a racially mixed and rootless flock of proletarian consumers….

“That — combined with the increasing number of non-European men capable of bearing arms pour into our nations — makes our task anything but easy. But our task, hard as it is, is not impossible. In order to enable our vision of a Greek Greece, the Nordic region for the Scandinavians, and a free and strong Europe, we must build a national resistance as hard as steel. We must sit down, roll up our sleeves, and begin to prepare for the toughest fight of our lives….

“Golden Dawn’s battle is much more than just a domestic struggle — their efforts are inspiring all of Europe; not least its northern areas. The party’s name is now known, and feared, above all on this Earth. Be certain that the enemy would do anything to prevent Golden Dawn’s strong methods and uncompromising message from spreading to the entire White world. WE STAND WITH GOLDEN DAWN!”

The rally was held to support Golden Dawn and to honor the memory of the two members of the party who were assassinated in 2013. Fountoulis and Manolis Kapelonis were shot dead outside the party’s headquarters in Athens by two men on a motorcycle. The perpetrators have still not been arrested by the police.

The men died because the Greek police and justice system refused to do their jobs. The party had asked the police to guard their headquarters, which had for a long time been threatened. But instead of getting help from the police, the duty of guarding the building fell to the party and its members alone. Ultimately, these two men were shot to death.

A week after the killings, a previously unknown political group [Often this is the fingerprint of an intelligence agency hit. — Ed.] took responsibility for the murders. The deed was supposedly an act of revenge for the murder of the leftist political rapper Pavlos Fyssas. The news site Zougla published the statement: “We, the People’s struggling revolutionary forces, take responsibility for the political executions of the fascist members of the neo-Nazi Golden Dawn.”

In Finland a parallel protest was held outside the Greek embassy in Helsinki, and several smaller events took place around the country with the same theme.

This Weekend: Blanket Your Neighborhood With MLK Truth
The Importance of Leadership
BNP’s “Bring Our Boys Home” Is the “Most Successful Non-Election Time Campaign Ever”
Shall We Have Law, or Shall We Have Justice?
EU to Fine States Quarter of a Million Euros for Every Migrant They Reject
Vetlanda Residents Informed of the True Opposition to Globalism
Hungary Offers Serbia Help in Guarding Borders Against Invaders
Germany: Merkel Facing Humiliation as Turkey Plots Purchase of Deutsche Bank
Tags:ActivismCorruptionEuropeGolden DawnGreeceMass MediaRallySweden

Slavery Didn't Happen As You Were Taught In School 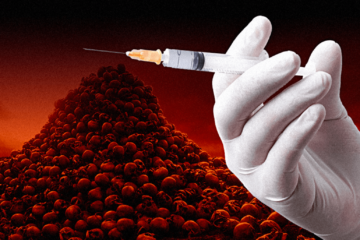 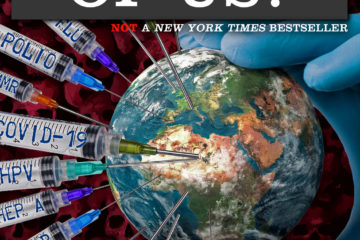 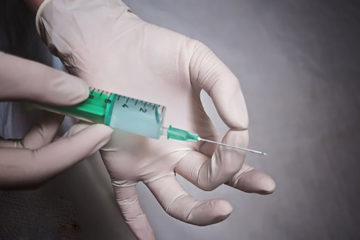