Russia and Europe — a Political Relationship That Has Never Been Solved

Editor’s Note: We at National Vanguard do not endorse all of the opinions or terminologies used in this review from the Visegrad Post, but we do find it a significant example of new thinking in Europe. The recognition that domination by (Jewish-controlled, though the author never says that) America is against Europe’s interests, and that a new understanding with Russia is the way forward, could open the door for a new power bloc — Visegrad/Moscow — and a great reversal of European man’s fortunes. The new bloc would still be heavily saddled by an alien religion, as this review makes clear, and by the very unfortunate “anti-fascist” mythology promoted by Putin. But its very existence, its expanding power, and its opposition to the White European death spiral demanded by the Washington regime are its most important characteristics.

THICK BOOKS with a lot of footnotes aren’t always of particular weight. Sometimes it is rather narrow booklets that convey important insights. One of these is “Europäischer Kontinentalismus — Wo steht Europa in einem fragwürdig gewordenen Transatlantismus?” [“European continentalism — where does Europe stand in a transatlanticism that has become questionable?”] written by Algis Klimaitis, a Lithuanian author.

Algis Klimaitis has inherited political genes. His great-grandfather, railway engineer and landlord of an estate near Kaunas, was one of the leaders of the Lithuanian national movement, and in 1863 participated in the Lithuanian-Polish uprising against the persistent national oppressive policy of Tsar Alexander II. His grandfather was for a short time the adjutant of Admiral Kolchak, the temporary ruler of the Russian Empire, and fought on the side of the “White Army” against the Bolsheviks. His father, Algirdas J. Klimaitis, was the leader of paramilitary associations, who liberated Kaunas from Soviet troops in 1941, even before the advance of the Wehrmacht. When the reconquest of Lithuania by the Soviet army was imminent, the family had to emigrate. They found a new home in Germany.

Algis was born in 1948 in Hamburg. Politically he undertook first steps within the active Lithuanian emigration movement, and in the 1980s he became the chief editor of Ostnachrichten [East News] published in Vienna by the Institut für Sowjetische Gegenwartsforschung [Institute for Contemporary Research in Soviet Affairs]. In the mid-1980s, he became Head of the Office of the Baltic World Council (Exile Organization) in Strasbourg, and soon thereafter Secretary General of the Baltic Intergroup of the European Parliament, an interfractional group of MEPs.

In the autumn of 1988, he was appointed to the European Parliament as a representative of the Baltic reform movements in Estonia, Latvia and Lithuania, which were created in the Baltic States under Gorbachev in the wake of the perestroika. Observation and information gathering by the KGB which was unavoidable at that time brought Klimatitis into the suspicion of cooperation with the KGB, which resulted for him in a three-month acquaintance with the prison in Vilnius, seemingly a political settlement of accounts that was concocted by the chairman of the Supreme Soviet of Lithuania, Vytautas Landsbergis, who proclaimed the restoration of Lithuania’s independence from the USSR. However, the high treason process against Algis Klimaitis ended with a grandiose rehabilitation. After that, he played a not insignificant role as an advisor to the formally first elected Lithuanian President Brazauskas. Since his retirement, Klimaitis, still politically active, is commuting back and forth between Vienna and Lithuania.

This unusual biography will provide most readers with a first, unexpected historical insight. The reform of the USSR, which ended in the dissolution of the Soviet Union, had been an action planned by the KGB for decades. From 1962 onwards, under the leadership of Fyodor Burlatzky, studies were launched by the Central Committee’s Secretariat for the Socialist States that doubted the survivability of the Soviet regime and recommended a turn to free elections, presidential democracy, the rule of law, the division of power, the separation of party and state functions, regional self-administration, independent entrepreneurship, the installation of capital markets and armament restrictions (pp. 85ff). Head of this CC Secretariat was Yuri Vladimirovich Andropov, the later long-term head of the Committee on State Security (KGB) and eventually, Secretary General of the CPSU (1982). As such, Andropov drew strategic conclusions from these studies that were finally implemented by his political “stepson”, Mikhail Gorbachev, during the Perestroika and Glasnost era from 1985 onwards. In the communist party, the conviction gained ground that the social acceptance of Soviet-type Marxism could no longer be expected.

The second insight that Klimaitis conveys to us is the transformation of the East-West conflict resulting from the Cold War into a West-East conflict. Russia reverts to its roots based on the symbiosis of religious orthodoxy and state authority. In the West, on the other hand, the US is assuming more and more features of secular, imperialist hegemony under a centralist bureaucratic direction, as it was once typical for the Soviet power. This is not least due to the fact that the Trotskyist elite that emigrated from the Soviet Union to the United States became the mainstay in publications, thinktanks and administration among the American neoconservatives.

This transformation and migration is the result of the nowadays increasingly perceptible alienation between the US and Europe. Last but not least, the confidence in transatlanticism has been fundamentally destroyed by US control and telephone listening practices that include every single European citizen. Even Mrs. Merkel, the German Chancellor and a pronounced transatlantic, was led to remark: “This is what one does not do among friends!” (p. 17).

But alienation naturally has much deeper reasons. Europeans are increasingly aware that the American Way of Life, together with the hegemonic ambitions, jeopardizes their cultural identity. “A large-scale turning away from the USA has begun and will not be halted, despite all the targeted media and political invocations” (p. 18). “The artificially accelerated disintegration” of the national states by the EU is less and less accepted by the majority of the population. At the same time, understanding for Russia and its history is growing.

In a brief sketch, Klimatitis conveys to us the idea that Russia, from the beginning of its history, has been a European country (p. 54). Russia, i.e., the Kievan Rus’, was founded by the Scandinavian Ryurik dynasty in Kiev, today’s capital of Ukraine, and it was Prince Ryurik who created the axis Kiev-Novgorod whose rivers and trade areas between the Baltic Sea and the Black Sea determined the early history of Russia for long centuries. Russia’s affiliation to Europe was underlined in the 10th century by the introduction of Christianity. Even the invasion of the Mongolian hordes (1264) could not cause lasting damage to Christianity. Until the Bolshevik revolution in 1917, the symbiosis between Christian orthodoxy and state authority remained characteristic for Russia, and it speaks for Russia that this alliance is now gaining strength again.

The development in Europe, however, has been and continues to be different. Klimaitis is not afraid to question the founding myth of the European Union. He presents evidence that it was not Christian politicians such as Adenauer, de Gasperi, or Schuhman who created the predecessors of the European Union and thus the EU itself, but that the decisive role was played by the Office for Strategic Services (OSS) and the CIA. These intelligence agencies created the “American Committee for a United Europe” which, as early as 1948, called for a “far-reaching European integration” in its program that was implemented gradually, but according to plan, by setting up institutions such as the Council of Europe (1949) and the EU .

This implementation is to be seen in connection with the Cold War, which broke out shortly after the defeat of the “Axis powers” (Germany, Italy, Japan). The unnatural alliance “between the West under the leadership of the United States as hegemon, organised on the basis of private-sector principles, with predominantly parliamentary-democratic structures, a predominantly accepted freedom of expression, freedom of residence, freedom of work, and an East led by dictatorial, communist parties” broke up quickly. Four weeks after the German capitulation, Churchill showed himself “deeply concerned” in a telegram to President Truman about Stalin’s interpretation of the Yalta decisions. With the USSR taking possession of the “liberated” countries and Communist parties gaining ground in Western and Southern Europe, the confrontation became inevitable.

Already in 1942, this unnatural alliance of the West with the Soviet Union was mentioned by Pope Pius XII. in his talk with the US Ambassador Myron Taylor, a scene that is depicted in a highly interesting way by Klimaitis (p.23f). The Pope asked “how America and England could coordinate with Russia, the seat of communism, at a social, moral, and economic level.” Taylor replied that these objections “no longer corresponded to evolution,” and that “the principles of communism belong to the modern world and the new international order”. In an unexpected way, Taylor later was proven right by the persecution of “un-American activities” in the McCarthy era against the infiltration of the US by communist forces. Unsuccessful attempts, as was shown by the protests against the Vietnam War in the years around 1968. The US lost the war.

Algis Klimaitis does not avoid to mention the conflict about NATOS’s extension to the East. Here the West violated the agreements with Russia, which were concluded in the course of German reunification. Loss of trust reached its climax in February 2014 when America supported the constitutional coup d’état in the Ukraine, which was countered by Russia with the integration of the Crimea into Russia. Since then, the much-cited European “peace order” does not exist any longer. In the last chapter of the book: “Is there a new Cold War?”, the geopolitical aspects and the transatlantic dependencies of Europe in the newly flared-up confrontation are analyzed in detail. According to Klimaitis, these confrontations are “in no way useful for the nations and states of Continental Europe,” as they are embarrassing for the political relations between such important countries as Germany and Russia. The disturbance triggered by American interests shows “once more that transatlanticism has degenerated into an increasingly narrowing political elite religion,” which underlines the necessity for the Europeans to finally consider their own interests (p. 96). After reading Klimaitis’s book, it is difficult not to agree with this conclusion.

What They Have Done With Their Power

"Prepare for Guerrilla War," Say Police Special Forces as the Authority of the State Crumbles in France 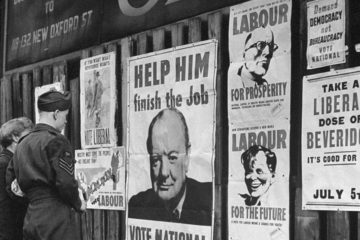 Russia and Europe — a Political Relationship That Has Never Been Solved