‘American’ Deemed a ‘Problematic’ Word by University of New Hampshire 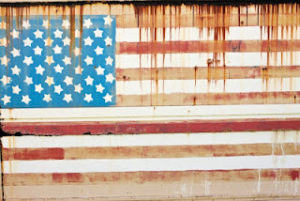 EDITOR’S NOTE: Actually, “American” — as redefined by our enemies to mean any featherless biped between the Rio Grande and the 49th Parallel — is “problematic,” to use the PC nutcase term. We prefer the definition of the Founding Fathers (accepted by virtually everyone until recent decades), who said that only those of European descent could be Americans.

A “BIAS-FREE LANGUAGE GUIDE” used by the University of New Hampshire includes “American” in a list of “problematic” words.

“American” joins “illegal alien,” “mothering,” “fathering,” and a collection of other words that are frowned upon by the university, education watchdog Campus Reform reported Tuesday.

The online guide suggests that students who wish to discuss a topic that would require using “American” instead use phrases such as “U.S. citizen” or “Resident of the U.S.”

The guide recommends against the term because it “assumes the U.S. is the only country inside” the continents of North and South America.

UNH’s “Bias-Free Language Guide” also includes sections on how to navigate “microaggression,” and gender issues. Those aggressions are broken down into the categories “micro-assault,” “micro-insult,” and “micro-invalidation.”

“Micro-aggressions hold a lot of power and especially because of their frequency in our culture. They may appear subtle and harmless, but we must address them if we wish to consider ourselves a truly civil society,” the guide says, suggesting students try to use “micro-affirmations” instead.

“While individuals on our campus have every right to express themselves, I want to make it absolutely clear that the views expressed in this guide are NOT the policy of the University of New Hampshire. I am troubled by many things in the language guide, especially the suggestion that the use of the term `American’ is misplaced or offensive,” Mr. Huddleston said, The Associated Press reported.

AP reported that the guide was created by students and staff in 2013.

Everybody was a citizen of their state until the 4 years war destroyed statehood. Many people in the South reject common citizenship styled the 14th amendment. From the late 1950s to the 1980s, the boys from the South were flying out of Houston to build the offshore oilfields across the world. With passport in hand, offshore hands would tell custom agents in foreign countries they were from East Texas, South Louisiana, Alabama, wherever.

The parade of strangers at the University of New Hampshire could learn a lot from the kinfolks who are cut from the same bolt of cloth(perfect communication).

‘American’ Deemed a ‘Problematic’ Word by University of New Hampshire