THE INCOMPETENT foreigner made the mistake of challenging me to support my assertion that his most recent book (pictured above) was full of half-truths. The whole point of issuing such a challenge is to say Gotcha! when there is a poor response or no response.

I posted the answer that I had formulated hours earlier, and D’Souza, instead of saying gotcha, had no comment — because I was clearly right. 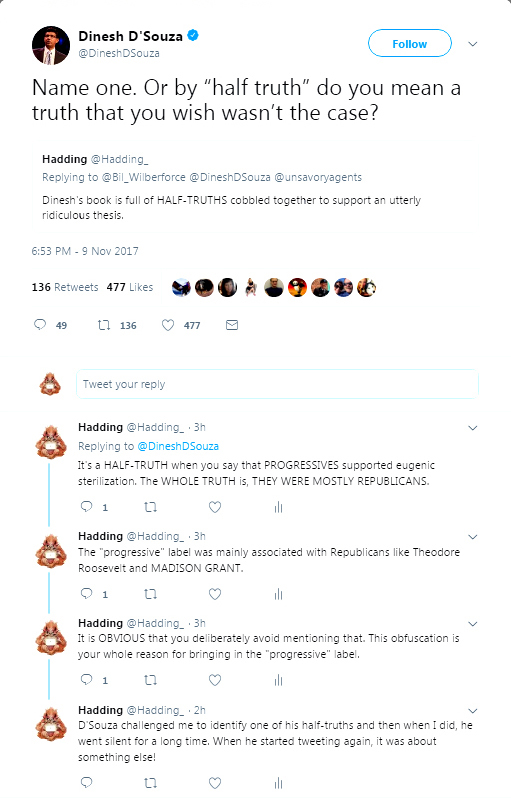 You will note that there is about an hour’s difference between my three posts responding to his challenge, and my follow-up comment about how he shut up after I put up. In the interim he started responding to criticisms from other people that were easier to handle.

I made lots of other anti-Dinesh posts, and I made some friends. Unfortunately most of those who “liked” my anti-Dinesh posts seem to be leftists, but an overt leftist is less reprehensible in my view than a foreign opportunist posing as a “conservative.”

A Couple of New Memes
Fred Streed's Affidavit for Will Williams
Racial Solidarity is Love
Did the Germans Get a Fair Trial at Nuremberg?
Why Did Jews Invent the Holocaust?
Alleged Gas Chamber Doors with Peepholes are Really Bomb Shelter Doors
The Democratic Republic is Moribund
Ayn Rand and the "Californian Ideology" as Proximate Causes of U.S. Economic Decline
Tags:Dinesh D'SouzaHadding Scott

It’s nice to see Hadding Scott gun down Dinesh D’Souza’s canards like ducks on a pond.

Would I be right to presume that D’Souza’s book The Big Lie is essentially derivative of works such as Jonah Goldberg’s Liberal Fascism?

Goldberg’s Liberal Fascism is one of D’Souza’s sources, but I watched an interview with Goldberg wherein it was evident that even he wouldn’t support all that D’Souza says.

“Big Lie” D’Souza’s lastest book Death of a Nation will be available everywhere books are sold on July 31, 2018! That’s today. Hadding, will you have something to say about this racial alien’s latest “conservative” blockbuster, defending White Americans? A blurb for his latest book: “Today’s Democrats have expanded to a multiracial plantation of ghettos for blacks, barrios for Latinos, and reservations for Native Americans. Whites are the only holdouts resisting full dependency, and so they are blamed for the bigotry and racial exploitation that is actually perpetrated by the Left.” It’s easy to tell the truth about the Democrat Party’s anti-White agenda, but the Whites I know are “racist” because having non-Whites who can’t make White babies in our midst, and having our noses rubbed in it all day,… Read more »

Relatively uneducated partisan Republicans who rely on others to supply their talking points seem to think that Dinesh D’Souza is a genius.

I was dumbfounded to hear my local Republican Party officials try to justify reverence for Dinesh D’Souza recently. In one breath they make the obvious observation that the Democratic Party (in the South) is completely different from what it was a few decades ago. But then they will defend Dinesh D’Souza’s thesis that it is the party of the Ku Klux Klan and slavery (and therefore has not changed).

Reviewers are saying that Death of a Nation is the worst of his movies so far.

I haven’t finished any writing about this yet.

I made some memes though!