Followers of Dinesh D’Souza are Stupid

JUST DISCOVERED: This 1930s progressive anthem uncovered in the DNC basement sums up the core values of Democrats.https://t.co/dWk4dDy58o pic.twitter.com/6nNREovxWg

What follows is an obviously satirical song that has Democrats boasting of their racism and various unpleasantries that Cultural Marxist (Jewish) propaganda emphatically associates with racism. [The song also could not have been recorded in 1930s America, as D’Souza implies, since it is recorded in excellent fidelity, and the only nation capable of such high quality recording at the time was National Socialist Germany, which is obviously not the source. It’s quite evidently a modern production. — Ed.] It includes the line, “Stick with us and we’ll create an Aryan nation.” In other words, it is a song that echoes D’Souza’s own bizarre characterization of the Democratic Party, in his books Hillary’s America and The Big Lie.

That already should be enough for somebody with an ounce of common sense to conclude that the song wasn’t really made by Democrats. But there’s more: one of the vocalists uses a funny voice. You have to be more than just poorly informed. You have to be very dim to think that this is real.

Nonetheless, a majority of the comments on D’Souza’s post are from people who believe that it is real. 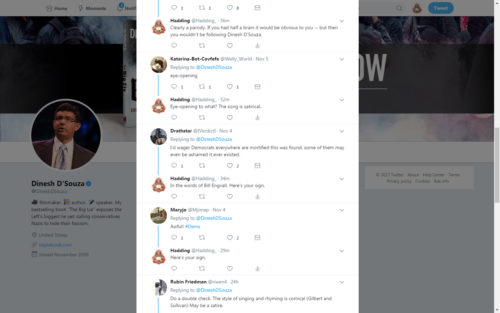 It was so bad that a Jew, Rubin Friedman, felt obliged to explain to D’Souza’s gullible goy followers that it was a joke.

I guess that I should not be surprised. If they could accept the rubbish that he has peddled in his books, then they are ready to believe anything.

It is really too bad that the eugenic sterilization movement initiated by Republicans more than a century ago did not make greater progress in raising the national IQ. 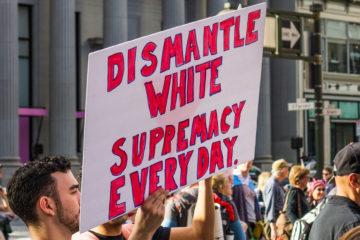 Rush Limbo is always saying that the Liberals do not understand satire, but it seems that the conservative Christians who follow D’Souza don’t either, even when Hadding tells them several times.

Those comments were all there before I replied to them. There were many more than I could show in a screenshot. I think that some of the comments may now have been deleted in shame. I have definitely managed to convince a couple of commenters that D’Souza misled them. D’Souza’s dishonesty is very easy to demonstrate. These are the points that I have used: (1) D’Souza hides the fact that eugenic sterilization was promoted mainly by Republicans: the first five governors to sign eugenic sterilization into law in 1907-1911 (in IN, CA, WA, CT, IA) were all Republicans. To hide this fact, he selectively avoids calling those Republicans by their party-affiliation and calls them “progressives” instead. At this point, after showing some supporting documentation, you may get a concession that… Read more »

This guy is controlled opposition. Known it for years. When will Whites get it that only Whites are our allies in this struggle? Black and brown people are either not smart enough to understand what’s really going on or far too brainwashed in blaming Whites for all their problems. This guy pretends to be conservative while reinforcing the “racist” idea that to focus on one’s race regarding political and social issues is a terrible, shameful thing. He peddles anti-Whiteness wrapped in the disguise of conservative republicanism, which doesn’t even exist anymore. I’d heard that in his last movie, he was bashing Andrew Jackson. No surprise there. As a brown person, he knows on which side his bread is buttered and serves the powers that support him accordingly.

Josef Tone
Reply to  Over It

Dinesh D’Souza comes across as the Deepak Chopra of “American conservatism,” in other words, an Indian flimflam man and gasbag who makes a living by peddling nonsense to the weak-minded. Their wares may differ — one peddles “conservative” claptrap, while the other peddles “New Age” nonsense — but their rackets are essentially similar.

Srdja Trifkovic’s article, “Dinesh the Charlatan,” is worth a read concerning D’Souza’s claims to know something about Islam — and, mutatis mutandis, everything else he scribbles and prattles on about.

Followers of Dinesh D’Souza are Stupid