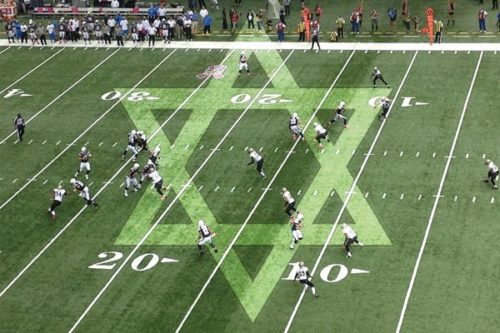 ANY WHITE MAN who spends a Sunday afternoon watching obese negroes in pink kneeling for our anthem while impotently hoping for “my” negroes to beat their negroes and inhaling kosher booze is a cuckold. Sit in the corner and watch the magical living fossil run, absorb the Jew spiritual poison, wear a Chinese-made jersey with a morlock’s name on it…these are not healthy activities for members of the shrinking and hated White minority. Fortunately, Whites are slowly waking up and turning off this Jewish circus. There is apparently a limit to how much humiliation the average White is willing to voluntarily participate in and this limit is being reached. Meanwhile the merchant laments the loss of muh shekels and can’t figure out why the shkotzim are turning off the electronic synagogue.

Once considered immune to the audience erosion plaguing the television industry, ratings for the National Football League have tumbled through the first four weeks of the season.

Look at that goy run! Away from the talmudvision, that is. The ugly third world spectacle is being rejected. A nationalist candidate is about to be elected president. If this is a dream, I have no interest in waking up.

TV networks have bet heavily on sports in general, and the NFL in particular, because of the must-see value of their content.

If you don’t watch you won’t get to see evolutionary dead-ends slamming into each other and mounting each other in giant tar piles. Talk about “must-see!” You want to see the noble savages from Red defeat those dastards from Blue, right?

Combined, ESPN, Fox, NBC and CBS are spending an average of $5 billion a year for football rights through 2021. The games not only score big ratings and ad sales, but are crucial platforms to promote other programming.

We’ll sucker you in with the promise of watching athletic excellence, then present a sickening spectacle of living fossil grab-ass interspersed with lectures on why Whites are evil and endless commercials for the latest Jewish bowel movements. You’ll sit there and take it because you’re a pathetic cuck, right?

So far this season, viewership on those networks is down about 10% from last season, according to Nielsen, with steeper declines for prime-time games on Sunday, Monday and Thursday.

Hopefully this is just the beginning of a total collapse and death of the certified kosher Negro Felon League.

The drop has caught advertisers and rights holders off guard and left them scrambling to find a cause.

We just can’t figure it out! Is it possible that there are limits to how much anti-White drivel we can force down your throat?

“We’re scratching our heads,” said Andy Donchin, chief domestic investment officer at Amplifi US, an ad-buying unit of Dentsu Aegis Network, whose clients include General Motors Co. “We cannot pinpoint any specific reason why the numbers are down. It is probably being caused by a confluence of events.”

“The election is probably the biggest factor that you could point to,” said Fox Sports President Eric Shanks.

Whites aren’t finally rejecting the monkey-shines of a failed race and they’re certainly not fed up with the Jewish zookeepers, that isn’t it all, you can be sure of that.

Everything is fine, the unclean meat is still in a pathetic stupor, please keep paying your geld for advertising.

The NFL is not far behind the NBA, which is to say total “thug” negro culture. It is all about performing what appears to be a derivative of African tribal dance (in the endzone after scoring), inflicting as much physical damage as possible especially on the remaining White players, and having another White-man-keeping-me-down episode of buffoonery (Kaepernick with 1970s afro getting political).

I haven’t watched much NFL since the 1990s. In part because of the negrophilia going on. The other part I cannot stand anymore are the incessant commercial breaks seemingly after each play. I can guess who is behind this; i.e. the ones who make more money for it …. The Tribe.

“CBS Chief Executive Leslie Moonves also cited the presidential election, but said the declines haven’t hurt advertising “one iota.” Everything is fine, the unclean meat is still in a pathetic stupor, please keep paying your geld for advertising.” That’s JEW Leslie Moonves who is getting the goyim’s advertising dollars. Since so many products are advertised through the Jews’ business constructs, it’s seemingly impossible to boycott everything. What is possible is to refrain from buying “name-brand” products new from retailers as much as possible. Get them used from (or sometimes new as they’re donated to) second-hand stores. Buy generic. Use non-traditional markets which don’t use Jewish media for advertising. None of us can as yet kill the kosher monstrosity with one big blow, but by a thousand cuts shall the beast… Read more »

Yes. That reminds me of how back in the early 20th century the jews would not only buy all the news media but all the large department stores who provided the bulk of advertising for the news media; it wasn’t the individual subscribers to news papers that provided their revenue. With control of the advertisers, no other small/medium newspaper would dare cross the jew in word/thought/deed. Now that I think of it, I would bet the cable companies, once again under the thumb of the jew, make everyone subscribe to a whole package instead of picking/choosing individual channels. That could be one way the jew subjects as many to their propaganda like they do with the advertising you mentioned. It would be hard for a small locale to have its… Read more »

White people should not watch, follow, or participate in any sporting event which allows non-Whites to participate. That this means boycotting every organized sport on the planet, from little league to the NFL, is telling of how much trouble our people are in.

We must maintain this until we have our own societies. In the meantime, exercise individually, or organize informal games with your White friends.

Yes Ted, keep fit and start your own tiny bank.

College football is almost here again. The spectacle of millions of white kids cheering a few thousand negroes in stadiums throughout the US returns for a bunch of Saturdays. It’s all good, the combination of extreme sexual-dimorphism and child-like, sideline monkeyshines warning the white kids to look but never touch, like watching lions vs. tigers in an ancient Roman coliseum; it’s fun from the gallery, but you see that they could never be pets.