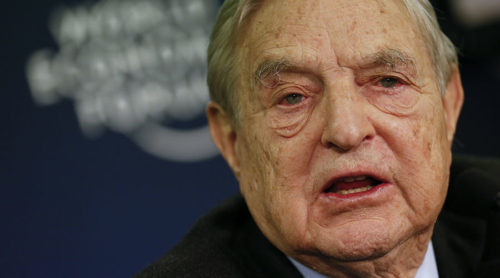 WESTERN EUROPE is rapidly approaching a point of no return, an invisible boundary where the combined devastation caused by rapefugee invasion, spiritual sickness and pathetic cowardice reaches a critical mass from which there can be no recovery. Realizing this, our Jewish enemy has become extremely aggressive in forcing our homelands over the edge, in hunting down every last White. The ultimate goal is our complete destruction. There is no longer any effort made to disguise this staggering kosher crime as Big Jew rants about what’s best for Europe and, big surprise, it’s the complete dispossession and annihilation of the indigenous population. (ILLUSTRATION: Trust me)

The refugee crisis and the Brexit calamity that it spawned have reinforced xenophobic, nationalist movements that will seek to win a series of upcoming votes — including national elections in France, the Netherlands, and Germany in 2017, a referendum in Hungary on the EU refugee policy on October 2, and a rerun of the Austrian presidential election on the same day.

With the tide starting to turn toward nationalist sanity over globalist suicidal madness the king of the Jews is not happy. Maybe more name-calling can help? Cut it out you “xenophobic” monster! You’re not allowed to have your own country, not like myself and my hateful tribe.

What part of “Semitic suicide pact” don’t you self-serving gentiles understand? Hurry up and get it in that hole, Europe. You don’t want to build a fence and harm your more gullible neighbors, let alone offend the nebulous and meaningless standard of “global human-rights.” Oy vey, the sufferink,” screams the Jew as it hits you.

The EU is trying to impose quotas that many member states strenuously oppose, forcing refugees to take up residence in countries where they are not welcome and do not want to go, and returning to Turkey others who reached Europe by irregular means.

You’re just not dying fast enough, shkotzim! Take in the brown sewage that’s completely incompatible with your government, culture and religion. Give them hand-outs, welcome them and welcome your own death. It’s the right thing to do, clearly.

This is unfortunate, because the EU cannot survive without a comprehensive asylum and migration policy.

If you stop letting in alien moon cultists bad things are bound to happen. This is very logical.

The current crisis is not a one-off event; it augurs a period of higher migration pressures for the foreseeable future, due to a variety of causes. These include demographic shortfalls in Europe and a population explosion in Africa; seemingly eternal political and military conflicts in the broader region; and climate change.

Yeah. The predictable non-White failure is going to continue along with the White spiritual failure of childless women and empty kosher materialism and careerism. Now you’ll be expected to absorb the foreign invasion until Europe and Africa are indistinguishable.

If the EU made a commitment to admit even a mere 300,000 refugees annually, most genuine asylum-seekers would view their odds of reaching their destination as good enough to deter them from seeking to reach Europe illegally — an effort that would disqualify them from legal admission.

Nice Talmudic reasoning here. Just let in a token number, say 300,000 a year, and the amount of illegal invasion should decrease by at least 300,000, although it will obviously continue if you don’t start defending yourself. We can be nice and reasonable as we help you get that shotgun into your mouth, goyim.

It is estimated that at least €30 billion per year will be needed for a number of years, and the benefits of “surge funding” (spending a large amount of money up front, rather than the same amount over several years) are enormous.

Muh shekels. Let’s get going on that “surge funding” to help get our nations and race into the cold uncaring soil as quickly as possible. Think of the enormous “benefits” like having the Jew and the biological weapon it’s using to destroy us get the geld right away.

A voluntary matching mechanism for relocating refugees is needed. The EU cannot coerce member states to accept refugees they do not want, or refugees to go where they are not wanted. A scheme like the one used by Canada could elicit and match the preferences of both refugees and receiving communities.

“Scheme” is definitely the correct word for this madness. How many sub-Saharan 60 I.Q. Muslims should we put you down for Luxembourg? 300,000 is the standard amount. Per year, naturally.

The final pillar is the eventual creation of a welcoming environment for economic migrants. Given Europe’s aging population, the benefits migration brings far outweigh the costs of integrating immigrants.

I’m not going to offer any evidence for this unbelievably risible claim, but you can trust me, I’m a Jew. Europe: Wake. The. Hell. Up.

All the pieces need to fit together, and the chances of success remain slim. But as long as there is a strategy that might succeed, everyone who wants the EU to survive should rally behind it.

Your evil globalist wire-puller body should be more important than your race, your country, your faith, your family or your own life. Let’s all rally behind this Jewish tower of Babel.

If Europe has an aging population then why did past European governments not highlight the first signs of that impending problem to the peoples of Europe much earlier and then implement measures to monetarily incentivize Europeans into having more children rather than relying on the excess populations outside Europe as the solution to demographic decline? And why doesn’t the current Japanese government see the mass importation of non-Japanese as the solution to their demographic decline? Also, if Soros and his ilk are truly concerned with environmentalism then surely increasing the population of Europe is going to be more to the detriment of earths alleged environmental problems? Unless of course environmentalism is just a big scam targeted at Whites to de-industrialize the West so as to empower the East, and thereby… Read more »

Flooding countries with people from low IQ Third World nations and then letting them breed like rabbits on tax-payer funded welfare will lower the host country’s average IQ. This is already happening in some European nations and Australia with its large Third World migrant intake.