The Jewish love of slaughtering innocents

KAPPAROT, as most of us here know, is a ritual where a Jew swings a live chicken over his head to transfer his sins into the animal, which is then beheaded, or sacrificed to the Jew’s demon-god. Most of us see this as a silly yet cruel Semitic ritual, but I think it reveals something deep about the Jewish psyche.

Most of us here are also aware that Jews are big on projecting their negative traits onto Aryans, “hate” in particular. Jews project their crimes, and then if they have the power, persecute the people they accused of doing what they themselves do. Hence the Jew crying out in pain as he strikes you. Jews, of course, have a long history of genocides behind them which they celebrate during their major holidays.

It seems to me that all Jewish slaughters of host peoples follow the same exact principal as the Kapparot ritual. Jews transfer/project their sins onto whatever innocent host society they are infesting and then murder its people to absolve themselves in their own heads. I’ve come to call it the Kapparot Impulse.

Look at America, a country that was only ever kind to Jews. Yet they came here in droves in the 1880s and hadn’t taken five steps off the boats before they were establishing Marxist and communist organizations to destroy the country which took them in.

It was America’s innocence which drove Jews into such a hateful frenzy to destroy the people who welcomed them. The Jews came to America, accused America of anti-Semitism, and then murdered America in exactly the same way they can take a chicken and cruelly butcher it because the Jew believed it harbored his sins.

The Jew is the serial killer of human history, going from victim to victim and slaughtering without compunction. The more innocent a people is, the more Jews delight in killing them. Another hallmark of the psychopathic nature of a serial killer. Needless to say, Jews are famous for lacking in empathy.

Part of me believes that Jews subconsciously understand that they are evil, but since their nature prevents them from addressing that evil, they have no choice but to psychologically expel that evil onto others.

Hollywood’s Agenda, and the Power Behind It
Nebraska: How a Jewish Wall Street Vulture Killed an American Town
A Noteworthy Subversive American Historian
Soon It Will Be Illegal Not to Love Jews
Not Believed to be Random
Our Beloved African Equals Behaving Normally
Israel: One Way or Another, Jews Will Deport Blacks
The Sinking of the Wilhelm Gustloff
Tags:Jewish behaviorJewsKapparotMurder

There is always a choice; they chose evil.

It is the definition of evil: know it is wrong and choose willfully to do it anyway.

Not out self preservation, God knows other countries have offered them a country of their own if they would just go there. They do it by choice and any, and I mean any, Justice dished out to them is righteous.

Jewish projection is the theme of a 400-page book by Hervé Ryssen, Le miroir du judaïsme: L’inversion accusatoire. It’s interesting that while the Jews claim to be the eternal victims of scapegoating, the Old Testament indicates that they invented the practice of scapegoating in the most literal sense: they would ritually cast their sins onto a goat, then drive the goat into the wilderness. More modern Jews understand that “controlling the narrative” is a much more effective means of practicing projection — and of gaslighting the goyim — than waving chickens around their heads three times before killing them. An article by Noah Goldberg, “Chicken Blood Is Everywhere!,” indicates that Jews practicing kapparot are practically exempt from laws proscribing their cruel and unsanitary practices: “In 2015, the Alliance [to End… Read more »

“These magnanimous words distinguish good from evil”: “By their fruits you will know them. ”Matthew 07:16 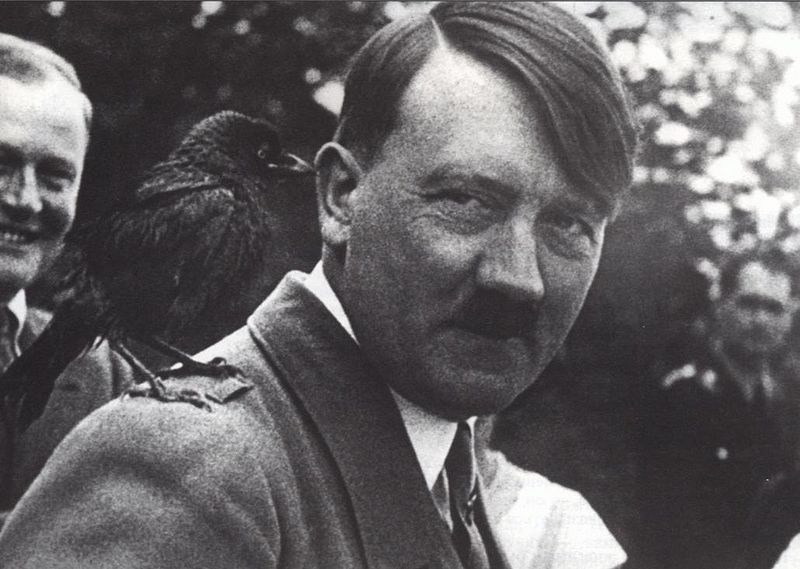 Did you know that Hitler was vegetarian and abstainer, and did not eat meat because it represented the death of a living creature; or that he didn’t smoke or allowed to smoke in his presence?
https://nationalvanguard.org/2020/04/italy-renowned-artist-depicts-ritual-murder-of-white-child-jews-enraged/#comment-32580