WE ARE told enough times about the terrible crimes committed by Germans but why is there stoic silence on the crimes committed by the Allied forces (UK, US, FRANCE and SOVIET UNION) on Germans? Germany was defeated in May 1945 with that ending World War 2. What gets conveniently hidden from history’s tell tales are the horrible crimes that covered destruction, looting, starving, rape, ethnic cleansing and mass killing of the vanquished German people. Why were innocent German men, women and children persecuted and thrown out from their centuries’ old homes? (ILLUSTRATION: US soldier guarding one of many open-air concentration camps for Germans, where millions died.)

If there was ever an example of triumphalism it was seen in the manner the victors, the US, UK, France and Soviet Union treated the losing nation and its people. There is no other more suitable word to call it other than holocaust and it remains unknown or ignored because the perpetrators like to depict themselves as magnanimous victors and not the barbarians they really were. When the story is written by the victor would they include their crimes? They want the Allies to remain Heroes and the Axis to remain the Villains. Now some of the same Victors have written the international human rights laws that do not apply to them as they continue the same crimes.

A Proclamation  for Germans in Czechoslovakia

It has been ordered that, effective immediately, all persons of German nationality age 6 years and up shall wear the following sign:

A white circle 15 centimeters in diameter upon which a 2 cm thick letter “N” of black linen is sewn to whose edge is 1 cm within the edge of the circle. This sign shall be worn on the left breast. Germans who were members of the NSDAP, the SA, the SS, NS Public Welfare office, NS Women’s Association, NSKK, or any other division of the Party, must wear this sign on the back.

All Germans are forbidden to ride public transportation, visit public places of entertainment or parks!

All Germans are forbidden to leave their dwellings after 8 P.M.

If Russian or Czechoslovakian officers are met or chanced upon in the street or elsewhere, Germans must remove their hats or caps and pass by at an appropriate distance.

Store purchases are allowed one hour before closing.

The badges must be procured by each German himself in accordance with the prescribed design.

Non-Compliance with the above mentioned order is punishable.

Any citizen of different nationality shall also be subject to punishment for aiding, abetting or helping Germans in any manner!

“God , I hate the Germans,” Eisenhower wrote to his wife, Mamie, in September, 1944. Earlier, in front of the British ambassador to Washington, he had said that all the 3,500 or so officers of the German General Staff should be “exterminated.”

The Allies and Their Concentration Camps

At the Yalta conference in early 1945, the Big Three Allied leaders agreed that the Soviets could take Germans as forced laborers, or as slave labor. It is estimated that 874,000 German civilians were abducted to the Soviet Union. These were in addition to the millions of prisoners of war who were held by the Soviets as forced laborers. Of these so-called reparations deportees, nearly half — 45 percent — perished.

Very few persons in Britain or the United States spoke out against the Allied policy. Victor Gollancz, an English-Jewish writer and publisher, toured the British occupation zone of northern Germany for six weeks in late 1946. He publicized the death and malnutrition he found there, which he said was a consequence of Allied policy. He wrote: The plain fact is … we are starving the Germans.  And we are starving them, not deliberately in the sense that we definitely want them to die, but willfully, in the sense that we prefer their death to our own inconvenience.

Bertrand Russell, the noted philosopher and Nobel Prize recipient, in a letter published in a London newspaper in October 1945, he wrote: In eastern Europe now mass deportations are being carried out by our allies on an unprecedented scale, and an apparently deliberate attempt is being made to exterminate many millions of Germans, not by gas, but by depriving them of their homes and of food, leaving them to die by slow and agonizing starvation. This is not done as an act of war, but as a part of a deliberate policy of ‘peace.’

History is written by the victor. Allies are thus painted the Heroes, totally erasing from history the gory crimes committed by them. If a crime is a crime, the crimes of the Axis cannot be any worse than the Allies. Murder remains a murder. Justifying such actions is totally wrong.

Immediately after war there was NO RECONCILIATION, NO FORGIVENESS and NO AMNESTY. The victors put German military, Germany political leaders and German civilians on trial and the Allies became both prosecutor and judge. When the perpetrators turn prosecutor and judge there is little relief for the losers. It was vengeance all the way. Their standards of justice applied only to the vanquished. The United Nations of the Allies completely omitted from justice their own injustices.

Robert Jackson, the chief US prosecutor at the Nuremberg Tribunal of 1945-46, privately acknowledged in a letter to President Truman, that the Allies have done or are doing some of the very things we are prosecuting the Germans for. The French are so violating the Geneva Convention in the treatment of [German] prisoners of war that our command is taking back prisoners sent to them [for forced labor in France]. We are prosecuting plunder and our Allies are practicing it. We say aggressive war is a crime and one of our allies asserts sovereignty over the Baltic States based on no title except conquest.

What needs to be clearly understood from the handful of examples given above is that the history that many are told of is not the real history. We also need to understand that it is these same perpetrators who have written the laws that we are now told to follow while they themselves remain omitted from persecution of any kind: no persecution for the crimes done in the past and no persecution for crimes committed in the present. What kind of legal system are we allowing to take place?

Alternately, if we are said to have a new balance in leadership in countries like China and Russia, what type of reaction are they offering in terms of taking stock of the dangers that this new trend of world order aligned to the handful who control the West are now slowly putting into place that will bring the entire world order under them? The current laws and systems being deviously designed using Third World human rights abuse as an excuse is well on its way to ensuring that the entire world systems are concentrated under a handful of the very people who have engineered every war and conflict that has unfolded. None of the world’s conflicts started on its own. They were all engineered to concentrate power and profit on a handful of people. Unfortunately, we fail to see that even the perpetrators were actually victims because they themselves were used as part of the unfolding new world order and these same nations continue to be used for they are best placed to push the new plans into place.

Unless China and Russia realize the dangers lurking in our midst we are likely to see far more deaths and destruction than what the real history records of World War 2 has depicted.

If the standards of the Nuremberg Tribunal had been applied impartially, many American, British, Soviet and other Allied military and political leaders would have been and should have been hanged.

Give Pests a Chance: Revisiting Hiroaki Yoshida's Twilight of the Cockroaches 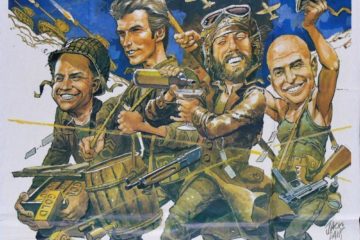