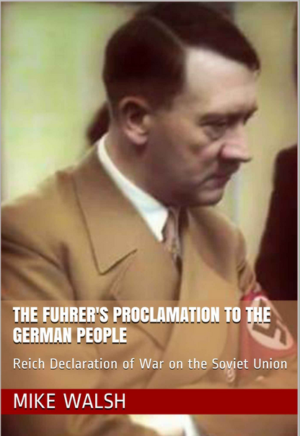 THE LAST WEEKS of June offer opportunity for the mainstream media (MSM) to recall the Reich’s pre-emptive strike on Bolshevik Russia. Their claim is that genial Uncle Joe Stalin was victim of Hitler’s biggest blunder. We are led to believe that the unprepared Red Army fought gallantly but faced by overwhelming odds fell back.

Their duped readership is conditioned to believe Hitler bit off more than he could chew when he unleashed his armies on the Soviet Union. (In view of on-going anti-Russian hysteria we might this year be spared the palace scribblers’ shindig.) However, this commonly held perception is a reminder that the MSM in the West is as mind-conditioning as it was in the hapless Soviet Union.

The true story behind the Reich invasion of the Soviet Union is now available from Amazon. The Fuhrer’s Proclamation to the German People offers a devastating rebuff to the propaganda of the victors. This is the reason why Hitler’s declaration of war on the Soviet Union was “off the radar” for decades. Until now your chances of finding a copy was remote.

The Soviets’ earlier attempt to Bolshevise Germany in 1918 failed. For this humiliation Germany was never forgiven by Soviet Russia or their U.S and English sponsors. By 1934 the Soviet Union was publicly declaring its intention to invade and occupy Europe’s only genuine democracy.

The Fuhrer’s Proclamation is one of the 20th Century’s most important books. Here is the indisputable chronicle of recorded violations of international law by the Soviet Union. In detail it catalogues Soviet threats, incursions, occupations, feints, and military attacks upon the Reich and its neighbours.

By 1939 the Soviet Union had invaded, plundered, and occupied over one score of independent nations. During this period benign Weimar and National Socialist Germany had never acquired territory other than that which had been illegally seized under the discredited Versailles Treaty or by referendum of the people’s will.

By spring 1941 the German High Command had gathered an encyclopaedic volume of undeniable evidence making clear Stalin’s determination to overwhelm not just Germany but all Western Europe. These carefully-catalogued Soviet violations occurred between 1918 and 1941. German complaints were widely published and lodged with relevant diplomatic offices and international media.

Hitler’s invasion of Bolshevik Russia saved much of Europe from the fate suffered by earlier conquered nations. The Soviets finally succeeded in their ambitions only when the nations they coveted were ceded by U.S. President Roosevelt and British Premier Winston Churchill in 1945.

The Fuhrer’s Proclamation is hardly heavy reading. It is the German leader’s explanation to ordinary German people as to why a pre-emptive strike on Bolshevik-occupied Russia was in the national interest. Palace media have gone to great lengths to hide evidence that it was Stalin’s territorial ambitions that choked the Soviet tyrant. The obstruction in the dictator’s craw was patted out from late 1941 by an obliging England and United States.

Whilst this information is available to self-styled historians and inky-fingers calling themselves journalists, the near-suppression of this book is clear proof of their spin-guilt. Grab your copy before — for some spurious reason such as copyright violation — the Proclamation is again removed from enquiring eyes.

There Are Hispanics and Then There Are "Hispanics" 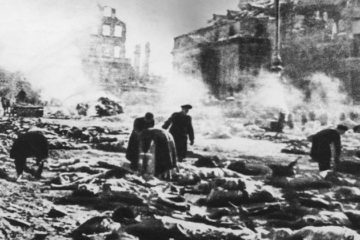