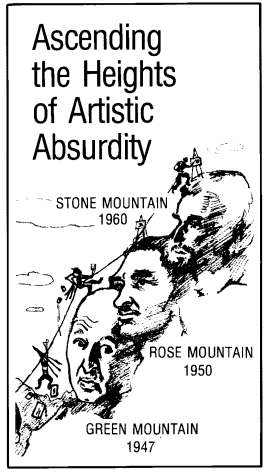 TOM WOLFE has written an entertaining and ironic précis of the American art scene from 1945 to 1975, which he predicts will go down in history as the age of the Painted Word. This is also the title of his new book (Farrar, Straus and Giroux), which further predicts that the painters and paintings of the era will be totally forgotten, but not its three most influential critics — Clement Greenberg, Harold Rosenberg, and Leo Steinberg. These were the gentlemen who cooked up the theories which explained or rather dictated the rules of the modern American painting game. Since their writings exercised such magisterial power, the resulting art, if you would call it art, was really more of the Bergs’ doing than the painters.

How did the U.S. get into a predicament where its art depended on the whims of three critics who happen to belong to the race which has had religious and social injunctions against painting and sculpture for almost 3,000 years? On the basis of natural selection alone, it would seem that the three Bergs would be among the least qualified of all Americans to have any say whatsoever in art.

Yet, according to Wolfe, the three Bergs are the chief American arbiters of “Cultureburg,” a “free world” hamlet of 10,000 people, to which the banalities and excrescences of modern art, both foreign and domestic, are restricted. Of this group only ninety Americans, mostly New Yorkers, are collectors. The rest of us, because of its cost and content, participate in it by reading the newspapers.

The ideologues who created the concept of modern art, Wolfe thinks, have nothing but theory to go on and have reduced painting to an absurd heap of vaporous schemata. But are these theories as harmless as Wolfe seems to suggest? The hundreds of thousands of yards of canvas dedicated to ugliness, pornography, shock and bad taste cannot be discounted. They may represent theories, but the paintings are still there. The museums are cluttered with them. The university art rooms are bulging with them. Time will only relegate them to the sewers from which they flowed when Cultureburg no longer controls the channels of art communication.

Clement Greenberg and Harold Rosenberg emerged from the radical left intelligentsia of Lower Manhattan in the 1930s. After some years of dabbling in art criticism, Greenberg suddenly came to the conclusion that the third dimension had no place in painting, that every trace of perspective should be eliminated in favor of what he called “purity and fuliginous flatness.” A whole school of abstract expressionism sprang up to put Greenberg’s maxims on canvas. Jackson Pollock, an artist of modest talent who was making some progress as a disciple of Thomas Hart Benton, a Majority painter persona non grata to New York art circles because of his antipathy to the “curving wrist and outthrust hip,” fell under Greenberg’s spell and developed a technique of drip painting (see cover). This consisted of walking around on top of a large piece of canvas and squeezing paint tubes — a practice long known to house painters. Pollock later married a Jewess, became an alcoholic and died in a dramatic automobile crash with a carload of women. Before becoming Greenberg’s protégé, he had been the pampered darling of Peggy Guggenheim, the niece of Solomon Guggenheim and a patron of surrealism, who put Pollock on her payroll before turning him over to Greenberg.

To make a name for himself, Harold Rosenberg had to go Greenberg one better. So he came up with action painting, which can best be described as what happens when an artist considers a canvas his mortal enemy and engages in hand to hand combat with it. The greatest action painter, according to Rosenberg, was the refugee Dutch artist, Willem de Kooning.

Since there was no room for Leo Steinberg in the flatness and action painting schools, he had to come up with something still “newer” or remain an obscure pedagogue at Hunter College. Enter Andy Warhol and his Campbell’s Soup can. Steinberg smelled something big and became the leading theoretician of pop art. He probably reached the zenith of his influence when Warhol’s can sold for $60,000. Steinberg also favored the comic strip paintings of Roy Lichtenstein and other non-artists.

Wolfe has described the art scene aptly, but like Ortega y Gassett who addressed himself to the dehumanization of art many years earlier, he defines the problem, but cannot offer any way out except to hope that the whole modern art movement will simply “vaporize.”

Perhaps so, perhaps no. Berg, Berg, and Berg and their fellow critics have artistically anesthetized two generations of Americans.

Richard Eichler, one of the few authentic art critics still at large, has asked in his great work, Konner, Kunstler, Scharlatane (J. F. Lehmanns Verlag, Munchen, 1959), where have genuine lovers of art been while the anti-artists and the art fakers have been cavorting about jet set salons and art agent cocktail parties? Why haven’t intelligent men and women opened their own galleries? Just because Nelson Rockefeller paid $35,000 for a bed by a con artist named Max Ernst doesn’t mean that the public should be envious. Or does it? Are there any people out there who really care?

There are millions. And they have registered their feelings over the past fifty years by refusing to buy one single piece of the garbage engendered or approved by Greenberg, Rosenberg and Steinberg. Art, thank God, is only dead in the plutocratic reaches of society. It will become alive again when the artists of history’s most artistic race stop listening to the schwarmerei of history’s most unartistic race.

To some of us art is the most important thing in life. Because we have no art except the art of the past, some of us have only lived half a life. A people who produced a painter like Thomas Eakins deserves better than to be deprived of its artistic heritage and its artistic future by an alien gang of throwbacks in Manhattan South. It is not strange that those whose art has been obsessed by words should have reduced our art to the Painted Word.

You can buy a copy of Tom Wolfe’s The Painted Word from Cosmotheist Books.

The Jews Behind the 1919 Spartacist Uprising in Berlin
Holocaust Day, Again and Again and Again
Bizarre Identity
Uncovering Céline
From AIPAC to Trump: Michael Glassner’s Journey
A Sense of Peoplehood Is Not a Pathology
Israel: Forty State-Funded Rabbis Say Jews May Not Rent Homes to Non-Jews
National Association for the Advancement of Kosher People
Tags:ArtInstaurationJewish Media ControlJewsModern Art

The Informed -- and the Informers

brilliant absolutely brilliant title,and it couldn’t be more accurate as well;
we are living in euROPE the same age of totalitarian staliniSmus although mostly at the moment on his psychic and social compound aspects ….

Note in the first paragraph that the hyperlink leads to our online bookstore and this book. The Painted Word was the first book I ever purchased from National Vanguard Books back in the late 1980s. At the first reading Mr. Wolfe was successful at letting me know just how Jewish the “Modern Art” movement was. Then I read it again, but that time I highlighted all the Jewish names in the book — all those Bergs — with a yellow magic marker. Wolf never had to use the “J”-word to make his point. That is how he got away with “naming the Jew.” 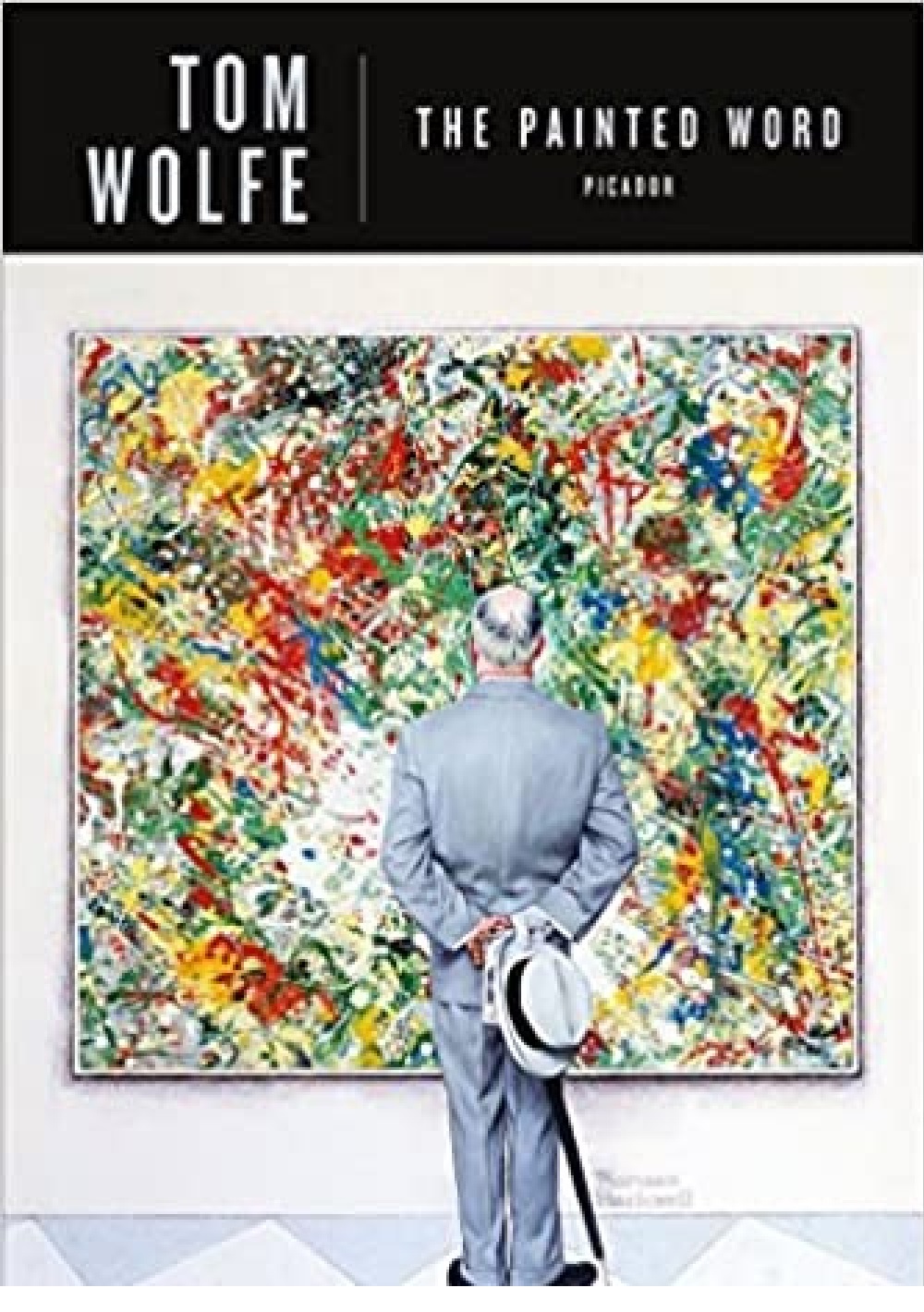