We have been down this road before, although most Americans don’t know it.

“Breaking chemical lights and pouring the phosphoric liquid on detainees; pouring cold water on naked detainees; beating detainees with a broom handle and a chair; threatening male detainees with rape; allowing a military police guard to stitch the wound of a detainee who was injured after being slammed against the wall in his cell; sodomizing a detainee with a chemical light and perhaps a broom stick, and using military working dogs to frighten and intimidate detainees with threats of attack, and in one instance actually biting a detainee.” — From General Antonio Taguba’s official report on events at Abu Ghraib, (quoted by Seymour Hersh in The New Yorker).

SINCE IT HAS become apparent that the sick treatment of Iraqi captives at the U.S. held Abu Ghraib prison is not an aberration caused by the misconduct of a few lowly Army-reservists, but rather a manifestation of someone’s concept of interrogation — although the value of information obtained through torture is questionable to say the least — it might be well to note that this kind of thing has happened before. In the past, when Americans in general were much more inclined to give their government the benefit of the doubt, such incidents were hushed up more successfully than in the present case. You may never have heard that German prisoners after World War Two suffered mistreatment at Nuremberg that resembled the recent mistreatment of Iraqi prisoners at Abu Ghraib, and that this too was done in the name of interrogation.

What about the prisoners at Abu Ghraib has made them deserving of such treatment? Will their tortured confessions be used to make propaganda to justify the U.S. occupation of Iraq? Read and learn from history how such confessions are extracted, what the truth-value of such confessions is, and what purposes they have served.

You may well derive a sense of dèja vu by reading this passage from Richard Harwood’s Did Six Million Really Die? because we have indeed been down this road before:

Altogether more disturbing, however, were the methods employed to extract statements and “confessions” at Nuremberg, particularly those from S.S. officers which were used to support the extermination charge. The American Senator, Joseph McCarthy, in a statement given to the American press on May 20th, 1949, drew attention to the following cases of torture to secure such confessions.

In the prison of the Swabisch Hall, he stated, officers of the S.S. Leibstandarte Adolf Hitler were flogged until they were soaked in blood, after which their sexual organs were trampled on as they lay prostrate on the ground. As in the notorious Malmedy Trials of private soldiers, the prisoners were hoisted in the air and beaten until they signed the confessions demanded of them. On the basis of such “confessions” extorted from S.S. Generals Sepp Dietrich and Joachim Paiper, the Leibstandarte was convicted as a “guilty organisation.” SS General Oswald Pohl, the economic administrator of the concentration camp system, had his face smeared with faeces and was subsequently beaten until he supplied his confession.

In dealing with these cases, Senator McCarthy told the press: “I have heard evidence and read documentary proofs to the effect that the accused persons were beaten up, maltreated and physically tortured by methods which could only be conceived in sick brains. They were subjected to mock trials and pretended executions, they were told their families would be deprived of their ration cards. All these things were carried out with the approval of the Public Prosecutor in order to secure the psychological atmosphere necessary for the extortion of the required confessions. If the United States lets such acts committed by a few people go unpunished, then the whole world can rightly criticise us severely and forever doubt the correctness of our motives and our moral integrity.”

The methods of intimidation described were repeated during trials at Frankfurt-am-Mein and at Dachau, and large numbers of Germans were convicted for atrocities on the basis of their admissions. The American Judge Edward L. van Roden, one of the three members of the Simpson Army Commission which was subsequently appointed to investigate the methods of justice at the Dachau trials, revealed the methods by which these admissions were secured in the Washington Daily News, January 9th, 1949. His account also appeared in the British newspaper, the Sunday Pictorial, January 23rd, 1949.

The methods he described were: “Posturing as priests to hear confessions and give absolution; torture with burning matches driven under the prisoners’ finger-nails; knocking out of teeth and breaking jaws; solitary confinement and near starvation rations.”

Van Roden explained: “The statements which were admitted as evidence were obtained from men who had first been kept in solitary confinement for three, four and five months. . . . The investigators would put a black hood over the accused’s head and then punch him in the face with brass knuckles, kick him and beat him with rubber hoses . . . All but two of the Germans, in the 139 cases we investigated, had been kicked in the testicles beyond repair. This was standard operating procedure with our American investigators.”

The “American” investigators responsible (and who later functioned as the prosecution in the trials) were: Lt.-Col. Burton F. Ellis (chief of the War Crimes Committee) and his assistants, Capt. Raphael Shumacker, Lt. Robert E. Byrne, Lt. William R. Perl, Mr. Morris Ellowitz, Mr. Harry Thon, and Mr. Kirschbaum. The legal adviser of the court was Col. A. H. Rosenfeld. The reader will immediately appreciate from their names that the majority of these people were “biased on racial grounds” in the words of Justice Wenersturm — that is, were Jewish, and therefore should never have been involved in any such investigation. Despite the fact that “confessions” pertaining to the extermination of the Jews were extracted under these conditions, Nuremberg statements are still regarded as conclusive evidence for the Six Million by writers like Reitlinger and others, and the illusion is maintained that the Trials were both impartial and impeccably fair.

When General Taylor, the Chief Public Prosecutor, was asked where he had obtained the figure of the Six Million, he replied that it was based on the confession of S.S. General Otto Ohlendorf. He, too, was tortured and his case is examined below. But as far as such “confessions” in general are concerned, we can do no better than quote the British Sunday Pictorial when reviewing the report of Judge van Roden: “Strong men were reduced to broken wrecks ready to mumble any admission demanded by their prosecutors.”

The names of seven U.S. personnel shown in the scandalous photographs from Abu Ghraib have been published. In order of rank they are: Staff Sergeant Ivan L. “Chip” Frederick II (a White man who is married to a Negress); Sergeant Javal Davis (Negro); Specialist Charles A. Graner; Specialist Megan Ambuhl; Specialist Sabrina Harman; Private Jeremy Sivits; Private Lynndie England. Several of the accused have indicated that abuse of prisoners was encouraged by Military Intelligence as an aid to interrogation, and this claim is corroborated by witnesses who are not among the defendants. Hersh summarizes General Taguba’s report thus: “The picture he draws of Abu Ghraib is one in which Army regulations and the Geneva conventions were routinely violated, and in which much of the day-to-day management of the prisoners was abdicated to Army military-intelligence units and civilian contract employees.” In other words, those being prosecuted so far are only the smallest players in this scandal. The names of the important culprits should come out eventually, and I eagerly wait to see what their ethnic background will be. We have the name of Frederick’s superior, the commander of the 320th Military Police Battallion, Lieutenant Colonel Jerry Phillabaum, who Frederick says knew what was being done to the Iraqis and condoned it. Some of the higher-ups blamed in Taguba’s report are Colonel Thomas Pappas, the commander of one of the M.I. brigades, Lieutenant Colonel Steven Jordan, the former director of the Joint Interrogation and Debriefing Center, a civilian contractor named Steven Stephanowicz of CACI International, who was empowered to give instructions to Army personnel that according to Taguba “equated to physical abuse,” and another CACI employee, John Israel.

We see a strange abundance of Jews involved in the torture of Iraqis, just as in the torture of German prisoners six decades ago, and that is certainly an important key to understanding why this has been going on. 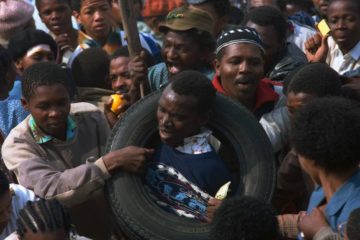 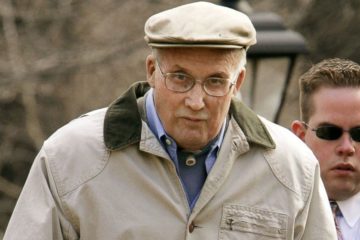