This piece was originally written in November, 1997, just after the confrontation it describes. Mr. Williams shows how easy it is to repurpose an enemy event by inserting a little bit of incontrovertible truth into the discourse.

HERE’S A talk you may have missed last week. Please let me know next time a Marxist despot hikes up here in the Triangle, so I can go keep him honest too.

Upon reading in the Raleigh News and Observer that the former president of the third world cesspool, Haiti, Mr. Jean-Bertrand Aristide, was going to be the featured speaker at Memorial Hall at the University of North Carolina – Chapel Hill last night, I and another National Alliance member decided to go there and check things out since it was open to the public.

You see, we know that Aristide is actually a brutal terrorist and was a despotic leader who encouraged his supporters to use the “necklace” against his political opponents. Like many other Marxists he works under the cover of being a “progressive” Catholic priest. There were probably a couple of thousand folks or more, a packed house; Aristide was introduced by Chancellor Hooker and was well received, getting a standing ovation both before he even said a word and after he gave his puff speech peppered liberally with “human dignity,” “peace,” “non-violence,” “resistance,” “justice,” “distribution of wealth,” and a lot of other Marxist catch phrases. Jews were handing out copies of Worker’s World and other communist literature.

I had decided to ask him some tough questions once it was clear that there would be a Q&A period after his speech. Most questions were softballs, but one fellow managed to ask, “Wasn’t the real reason you were kicked out of Haiti because of the violent way you treated your own people, with ‘necklacing’ and everything?”

To “necklace” someone is to put an old tire around the victim’s neck, break his arms and lash them inside the tire, then fill the tire with gasoline and light it — burning the hapless fellow alive in a very public display for effect. Winnie Mandela of South Africa, another celebrated Marxist murderer, once said, “With our matches and our necklaces, will will take back our country.” It’s a Black thing — Whites wouldn’t understand!

Aristide answered the man by “respectfully denying” that he was ever involved in such. He was only “restoring democracy,” which is a rather illogical term since the garbage heap had never enjoyed democracy before; sort of like that other now-popular term, “racial reconciliation.”

I managed to become the last questioner, but only after telling the girl who was trying to wrap things up, who asked me to sit back down, that I’d “driven all the way here to ask this great man, this hero, one quick question.” I was not going to be denied at that point. She said, “Well, OK, but you’re the very last one.”

I told President Aristide what a pleasure it was to be able to talk to him and how honored I was to be able to address such an eloquent spokesman for his people. He thanked me and then I told him I had a two-parter — first, I had a follow-up to the earlier fellow’s question about his alleged violence against his own people — “What exactly is necklacing, please?”

He knew he was in trouble then and the crowd started rumbling a bit too. He deferred and asked for the second part of my question.

I agreed. Then, using an article out of our fine National Alliance magazine, National Vanguard (No. 114, Nov/Dec. ’94), I asked him if he actually had made the following statement to a crowd of his supporters in 1991 at a rally in Port-au-Prince:

If you see a faker who pretends to be one of our supporters… just grab him. Make sure he gets what he deserves, with the tool you have now in your hands, the ‘necklace.’ …You have the right tool in your hands… the right instrument. What a beautiful tool we have! What a nice instrument! It is nice, it is chic, it is classy, elegant, and snappy. It smells good, and wherever you go you want to smell it.

Amazingly, I got the entire quote in, with clarity and much expression, over the, by now, boos and hissing of the mostly liberal, brain-damaged crowd of academics and pedants. My microphone was cut off, but not before I had reminded Mr. Aristide that dozens of his citizens were necklaced after he allegedly incited his ragtag mob of bloodthirsty supporters to burn to death publicly those who displeased him. I then repeated loudly — no public address system needed — the first part of my question, “Please, Mr. President, tell the audience just exactly what is necklacing and whether or not you said these words.”

He “respectfully denied” such again and declined to define necklacing as that would not be very “dignified,” I suppose, coming from a cleric, a man of peace and all that. I sat back down after I made it clear to the crowd that the mike had been shut off before I had finished.

[On 17 February, 2004 USA Today reported on Aristide, saying: “Critics cited his endorsement of “necklacing,” a gruesome method of execution where gasoline-soaked tires are thrown over a person’s neck and set ablaze. Just Wednesday, former Aristide strongmen necklaced a man in Gonaives, the heart of the current unrest. ‘What a beautiful tool! … It smells good. And wherever you go, you want to smell it,’ Aristide said Sept. 27, 1991.” — Ed.]

As we then made it to the entrance of Memorial Hall, scores of students and others sought me out and we handed them the four-page National Vanguard article by Dr. William Pierce, “Bringing Democracy to Haiti,” which also had the National Alliance’s local address, Web site address, as well as our American Dissident Voices radio show times and frequencies.

It was all very positive from there on as the booers and hissers stood clear for the most part. A couple of particularly vile Jews who tried to buttonhole me, demanding references and Dr. Pierce’s credentials, etc., were dispatched with a flick of my wrist.

A couple of strangers volunteered to help distribute the literature to the eager crowd as they filed out. A nice, young Black student asked me, “Why were you so hard on him?” I said “Why did he lie to you? He was in a war, and when you are in a war you kill your enemies, right? So why did he deny that he killed his enemies?” He said, “Yes, he did lie, didn’t he?”

A very attractive coed requested a copy of the article and started tugging at my arm saying, “You’ve got to meet my professor, you’ve got to meet my professor!” Then her professor, a tall, distinguished looking fellow, approached me and said, “You’re right! I’ve got the tape of that speech you were quoting from. It’s in Creole, but I speak Creole! Aristide is a liar!” I added that he was also a terrorist and a despot. The good professor added, “He’s worse than that — he’s a demagogue.” The by now substantial gathering around us was quite astonished at just how thoroughly they had been hoodwinked by this award-winning, “world-renowned man of peace” and “Frank Porter Graham lecturer.”

I went off and worked the rest of the crowd and had several more memorable incidents. One wide-eyed young fellow, as Aryan as one can possibly be, confronted me with, “Why the incessant questioning about ‘necklacing?’ I explained what a necklace actually is, then grasped the back of his coat and gently marched him over to the professor who had the tape of Aristide’s inciteful speech, who by now had gathered quite a crowd himself. That young truth-seeker will in future not be quite so believing of what he is told in his humanities classes, I suspect.

Anyway, the News and Observer had it right in this morning’s report of the gathering, when reporter Jane Stancill wrote: “The evening wasn’t without controversy.”

And now you know the rest of the story.

The Letter from the National Alliance Chairman They Wouldn’t Publish

What an inspiring story!

Great story. This is what White activism needs to be.

Yes, that is an example of real world activism, before virtual “social media” activism seems to have replaced it.

It only took the two of us, NA members myself and Hans Hansen and our confidence, to pull off that well-planned confrontation. We had Dr. Pierce and our National Alliance organization behind us that made it easy.

There’s no reason that this sort of activism by NA members will not happen again today — the time for it has never been more ripe!

I had been saying the phrase “Woe unto the Communist Cacodemon” in public.

What does anyone here think of that?

Could it be made into a poster or anything else?

We should use understandable English. I didn’t even know there is such a word as cacodemon until I just looked it up. It means an evil spirit. Synonyms are demon, devil, fiend, ghost, ghoul, ghoulie, imp and shaitan, whatever that is. You might just as well be saying the phrase “Woe unto the Communist Shaitan” as the Communist Cacodemon. ;o}

For a poster it’s difficult to beat this, a double entendre from WWII: 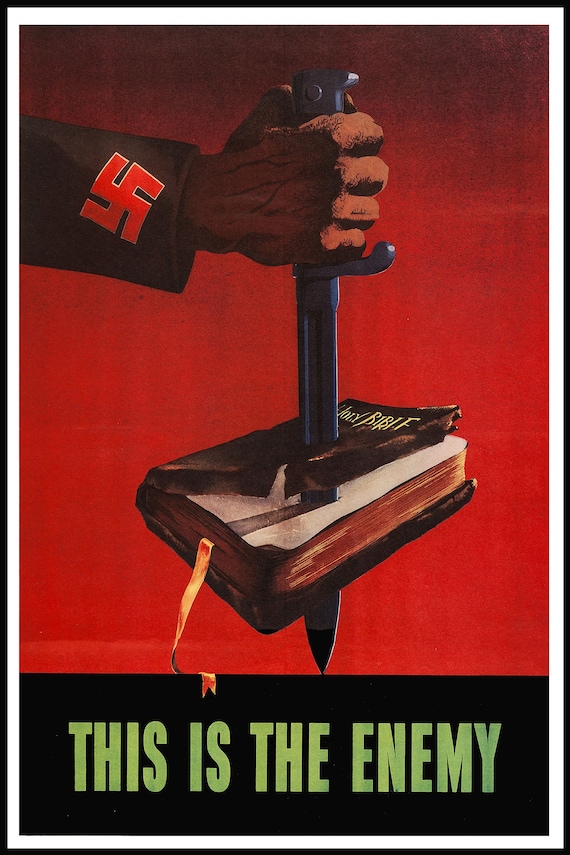 So, which is the enemy, National-Socialism or the Bible?

It’s a U.S. poster intended to have suggestible Americans think that the “Nazis” are their enemy for attacking their Christian beliefs. The first time I saw it I naturally thought, “Good, the Germans had it right. Christianity is the enemy.”

Alright then, I’ll settle for a revision, maybe as a battle cry:

“Woe unto the Communist Beings”

You sound like a Bircher from the 1960s with that anti-Communist stuff, Elfriede. Why not a poster in English with The Jews Are Our Misfortune? Dr. Pierce liked that slogan that had been popular in Germany since 1880. That doesn’t say that just Jews who are communists are our misfortune, but the entire tribe! Jewish communists can become Democrats, or neo-CONservative Republicans, or “dampened” Episcopalians, evangelicals, or even Jews for Jesus. Let’s tell it like it is: The Jews are Our Misfortune (Transcript of Classic ADV Broadcast) | National Vanguard I think it’s time for us to orchestrate our exposure of the Jewish media. I think it’s about time for the public, lemmings and all, to begin hearing a uniform charge against them, a uniform statement of our opposition to them.… Read more »