AS THE FRONT collapses, there’s disarray in the “Holocaust” ranks whilst some are turning their guns on their tormentors. The Jewish community is aghast that the Holocaust narrative has been seized and is now being used against them.

The dissident on this occasion is Estonian politician Georg Kirsberg. The Conservative People’s Party candidate vows to decriminalise the hated “Holocaust denial” laws. Such grotesque legislation, widespread throughout the European Union, makes independent investigation of Holocaust-related fraud a criminal offence.

As much to the concern of the Jewish and shabbos goy communities is that the Estonian candidate for parliamentary office wants to make it an offence to downplay Soviet crimes.

The candidate’s cutting-edge strategy is cause for much consternation. Those campaigning for investigation of Reich-related crimes find themselves on hypocrisy’s horns of dilemma. How can the shabbos goyim demand investigation of ‘Nazi crimes’ whilst simultaneously denying or downplaying Soviet crimes against humanity? Parliamentary hopeful Georg Kirsberg is going to be a formidable foe in the debating chambers of the Baltic State’s upper house.

Quoted by the Estonian National Broadcasting Company (ENBC), Kirsberg tossed a lit match into the dry tinder wood of the victors’ propaganda. The political party’s fiery campaigner says, “We will decriminalise ‘Holocaust denial’ and enter a correct teaching of the history of the Third Reich.”

Estonia, birthplace of Reich Minister Alfred Rosenberg, covers 45,000 square kilometers. Apart from its mainland, the most northern of the three Baltic States is home to 2,222 islands. Similar in size to the Netherlands, Estonia straddles a seismic political fault-line that bedevils the NATO West and the Russian Federation.

Estonia’s policy of ‘Estonians First’ is modelled on the ‘Germans First’ program initiated by the Workers Reich in the 1930s. Estonia’s Conservative People’s Party also campaigns to deport resident Russians known to be hostile to Estonian interests; many are Russian Jews. The Conservative People’s Party also supports a ban on the construction of new mosques.

Party leader Martin Helme says that laws that uphold Holocaust-related fraud continue to be upheld by his party. However, the party’s helmsman sees no reason to censure their party candidate over personally held views.

The basis for widespread anti-Russian sentiment in the Baltic states is their nation’s having been ceded as a prize of war by British warlord Winston Churchill and US President Roosevelt to Soviet dictator Josef Stalin. As a consequence of the betrayal, tens of thousands of people were ethnically cleansed, slaughtered, and deported to the gulag. The scars are still self-evident.

Mike Walsh is an Irish journalist, historian and author.

‘Death by Government’ the Guilty Ones 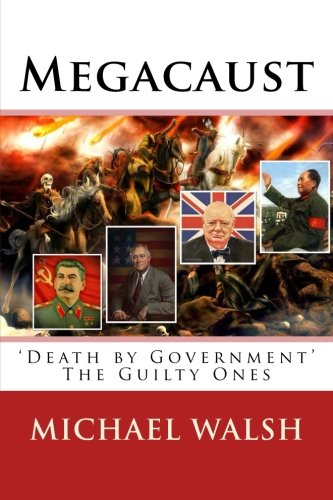 The Beginning of the End?

Florida: Jews Demand That Everyone Believe Exactly as They Are Told

The TRUTH is anti-Semitic!

The TRUTH is anti-Semitic!

The ‘six million’ is not actually a number. It is merely a piece of text. It cannot be used in counting or mathematics. It is similar to the model number displayed on a piece of equipment, e.g. the Flatulator 2000.

So much for German efficiency.

There was plaque erected outside of Auchwitz-Birkenau, in 1948, when the Jews stole Palestine. This plaque remembered the “one million Jews that died in the war”. Curiously, it has since been replaced.

The holocaust is a lie of the highest order, the kind of money-making scam that only a psychopathic Jew could dream of.

And the 85 million people killed by Jewish communism do not count as the true “holocaust”. Why is that, exactly?