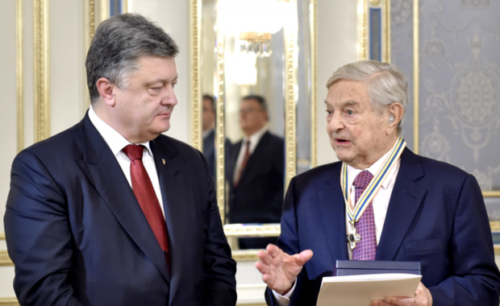 A TRANCHE of some 2500 Internal documents, mostly Microsoft Word, Excel, and Power Point files, as well as PDF files, from George Soros’s Open Society Foundation (OSF) network of non-governmental organizations, which were obtained from the group DC Leaks, shows that Soros and his advisers lorded over US policy toward Ukraine after the 2014 coup, supported by Soros and the Obama administration, ousted the democratically-elected Ukrainian president Viktor Yanukovych and his government. The leaked Soros documents describe how the OSF and Soros’s International Renaissance Foundation (IRF), based at 46 Artema Street in Kiev, worked with the US State Department after the 2014 so-called Euromaidan themed revolution to ensure that a federalized Ukraine was not in the picture. (ILLUSTRATION: George Soros (r.) with coup-installed president Petro Poroshenko)

In addition to George Soros (identified as GS in the leaked OSF documents, others involved in the Ukrainian coup planning included US ambassador to Kiev Geoffrey Pyatt; David Meale (Economic Counselor to Pyatt); Lenny Benardo (OSF); Yevhen Bystrytsky (Executive Director, IRF); Oleksandr Sushko (Board Chair, IRF); Ivan Krastev (Chairman, Centre for Liberal Studies, a Soros- and US government-influenced operation in Sofia, Bulgaria); Sabine Freizer (OSF); and Deff Barton (Director, US Agency for International Development (USAID), Ukraine). USAID is a conduit for the Central Intelligence Agency. Soros was present at a post-coup meeting on March 21, 2014 that involved US support for the New Ukraine. One document describes the New Ukraine as a key measure to reshape the European map by offering the opportunity to go back to the original essence of European integration.

Soros pushed for sanctions against Russia for refusing to recognize the coup-installed government headed by Arseniy Yatsenyuk, which included neo-Nazis, and rejected a federalized Ukraine that would grant self-government to the Russian-speaking eastern Donbass region. In effect, Soros vetoed a proposal by Pyatt to negotiate a proposal made by Russian Foreign Minister that would grant autonomy to eastern Ukraine within a federalized Ukraine. Soros rejected the proposal because he believed it would grant Russia too much influence in Ukraine. Although Assistant Secretary of State for European and Eurasian Affairs Victoria Nuland did not attend the March 21 meeting, she remained close to Pyatt and Yatsenyuk, who she affectionately called Yats. In the end, the Obama administration rejected a federalized Ukraine and gave its full support to the unilateralism of Ukrainian president Petro Poroshenko and his puppet master Soros.

It should be of no surprise that earlier this year, Pyatt was moved from Kiev as ambassador to Athens. One Soros document calls for the need to combat Russlandversteher, German for Russia understanding, throughout Europe, particularly in Greece with its history of close cultural and religious relations with Russia. The Soros OSF document calls for a concerted effort in Greece to influence public opinion against Russia and for the Ukrainian coup government. Proposed is an anti-Russian and pro-Ukrainian propaganda operation directed against newspapers, ten audiovisual outlets (TV and radio), six Internet sites in Greece, and about 50 opinion leaders present on Greek social networks. Greek newspapers targeted for participation in the Soros anti-Russia campaign included Kathimerini, Avgi, Ta Nea, Vima, Efymerida Syntakton, Eleutherotypia, Proto Thema, and Rizospastis. The Greek-Russian Chamber of Commerce in Athens was also targeted for inclusion in the Soros propaganda operation. Similar anti-Russian and pro-Ukrainian coup government media influence operations were proposed for Italy, Spain, and France. The reasoning was to counter any movement to support the status quo ante in Ukraine by the SYRIZA, Podemos, and Five Star Movement parties in Greece, Spain, and Italy, respectively. This Soros strategy was referred to as debate mapping.

While looking to influence Greek policy on Ukraine, Soros and his NGO gang pushed for European Union enlargement to include Ukraine and Turkey, neither country’s accession to the EU being in the interests of any of the EU’s member states. High priority was also given to integrating Moldova into EU structures. The overall theme of many of the Soros documents is that lying at the heart of Russlandversteher is anti-American feelings in Europe. European trade unions are singled out by the Soros gang as being at the heart of anti-American opinions in Europe. Certain political parties are also singled out, including the National Front of France, Jobbik of Hungary, the Netherlands Party of Freedom (PVV), and the UK Independence Party (UKIP), and are referred to by Soros as the PRR, or populist radical right. Pro-Russian German politicians are named in the Soros documents and they include former Chancellors Gerhard Schröder, Helmut Kohl, and Helmut Schmidt; Brandenburg Minister-President Matthias Platzeck; Die Linke leaders Gregor Gysi, Sahra Wagenknecht, and Katja Kipping, and former Hamburg mayor Klaus von Dohnanyi. Soros, who cut his teeth as a teen in Hungary cooperating with the Nazi Gestapo and Hungarian fascist Arrow Cross, prefers to maintain hit lists containing the names of his opponents.

It is the degree to which Soros provided finances, logistics, and other support to the Ukrainian coup plotters in 2012, two years before the Euromaidan uprising, that is noteworthy. OSF and its affiliates provided entire buildings, office space, computers, software, broadband Internet, videoconferencing equipment, vehicles, travel to the United States, and other material for the Euromaidan uprising. This was all done with the cooperation of the US and Swedish embassies in Kiev, USAID, the Carnegie Endowment, the Swedish International Development Agency (SIDA), and the Central Intelligence Agency-linked National Endowment for Democracy (NED).

Investigative journalists were also sought by the Soros gang to travel to Ukraine and submit articles that had to be approved by Soros operatives before publication. One major collaborator of Soros and the United States in pushing Ukrainian propaganda was identified as the Hromadske Television, which was singled out for its work to counter Russian propaganda.

One Soros document contains the following recommendation: Select journalists from the 5 target countries (Germany, France, Spain, Italy, Greece) and offer them long stay reporting trips in Ukraine. Rather than specify what they should write about they should make suggestions for articles; we retain a veto on stories we think are counterproductive. Suggestion that we liaise directly with journalists to determine interest. The Soros document even concedes that such an approach is not proper independent journalism and we may damage our credibility with journalists. Soros’s people proposed a firewall between Soros and journalists reporting on Ukraine. Soros’s organization proposed that a third party would receive the grant and act as the intermediary, editor, quality control etc. IRF [International Renaissance Foundation] should play a more lead role in this initiative to emphasize its Ukraine origins. The Soros organization decided to pursue PIJ, or public interest journalism outlets for a cooperative propaganda dissemination relationship regarding Ukraine.

There are a number of journalists around the world who have sold their journalistic professional credentials and credibility to the devil and have willingly accepted paychecks from Soros in order to disseminate his and the CIA’s propaganda. One such outlet that is cited as carrying Soros’s water is Huffington Post-Germany, which is identified as a collaborator of Burda, a center-right publishing house in Germany. Other German publications that Soros favorably viewed as pushing the anti-Russian line on Ukraine included Frankfurter Allgemeine Zeitung, Frankfurter Rundschau, Die Welt, Süddeutche Zeitung, Tageszeitung, Spiegel, and Junge Welt. Coming in for criticism by Soros was Neues Deutschland and Freitag, cited as being too friendly to Russia and anti-Ukraine.

The Soros documents identify a columnist for the Swiss paper Neue Zürcher Zeitung as receiving Soros money to hire a research assistant to promulgate pro-Ukraine propaganda. Others on Soros’s anti-Russia payroll and who authored Ukraine propaganda articles included researchers with the Barcelona Institute of International Studies, Chatham House in London, and the Istituto Affari Internazionali in Italy. Propaganda memes cited by Soros’s gang included expelling Russia from the G8, NATO military support and NATO membership for Ukraine, and sanctions against Russia. A Confidential March 12, 2015, Soros document reveals that the anti-Russian former NATO military commander and close friend of Bill and Hillary Clinton, Wesley Clark, in addition to Polish General Waldemar Skrzypczak, advised Poroshenko on military matters regarding Russia. The document cites Soros as the self-appointed advocate of the New Ukraine.

Soros is one of the closest advisers and financiers of Hillary Clinton. The leaked Soros documents describe how the Clinton Global Initiative and Soros Foundation cooperates on undermining the sovereignty of nations around the world, including those in Europe. And that relationship should weigh heavily on every American voter on November 8. 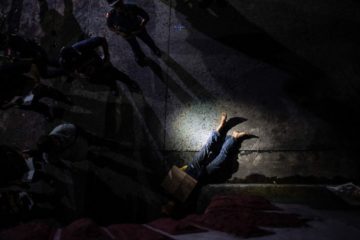 I am ashamed of my government.

Soros, your time is just about up.