Getting White Evolution Back on Track

A Conversation between Dr. William Pierce and Me

AUTHOR’S NOTE: In light of the recent discussion of the role of Cosmotheism in a revived National Alliance, Dr. Pierce’s comments in the third-to-the-last paragraph are especially interesting and relevant.

Some Background: I was a member of the National Headquarters staff of the National Socialist White Peoples Party/NEW ORDER in Arlington, Virginia, from 1977 through 1983. I left the staff on January 1, 1984, partly for personal reasons. I found myself at loose ends, both politically and financially. In the spring of that year, Dr. William L. Pierce of the National Alliance contacted me and asked me if I would be interested in working on a catalog for National Vanguard Books. Up to that point, NVB had no catalog, just a two-sided sheet of paper listing the titles they handled.

I agreed, and Dr. Pierce hired me to write, photograph and produce the first NVB catalog. The NA office at that time was in Crystal City, just a short drive from the NSWPP headquaters. Dr. Pierce paid me a generous amount for my effort. Working conditions were pleasant. One evening, after a long day’s work, he invited me to join him for dinner at a local restaurant.

Our Conversation: We had a wide-ranging discussion that evening. Dr. Pierce told me that he was working on two new books. The first was Hunter, a work of fiction, that, like his earlier Turner Diaries, allowed him to present his ideas in the form of an action novel. The second book he was working on was a history of the White race, Who We Are, which was based on a series of articles he had written for the National Vanguard tabloid newspaper.

This led to a discussion of White evolution. We both agreed that the White race had gotten off its upward evolutionary track, and had devolved, rather than evolved in recent centuries. I mentioned a recent communication from Dr. Peter H. Peel, whose doctorate was in history. He was a British National-Socialist who had taken up permanent residence in the US, and he was both a member of the NA and a supporter of Matt Koehl’s NSWPP/NEW ORDER. In his letter, Peel had expressed the conviction that the White race had been devolving since the start of the Industrial Revolution. The labor-saving devices introduced at that time had all but undone the evolutionary advances made by the White race since the Wuerm glaciation, in his opinion.

I told Dr. Pierce that I thought Peel was mistaken, and that I agreed with Friedrich Nietzsche, who wrote that the evolutionary decline had begun with the Neolithic Revolution, roughly 10,000 years ago.

(Digression: for those unfamiliar with prehistory, there is a period commonly known as the “Stone Age.” This was when our ancestors had not yet learned how to work metal, and used stone instead for tools and weapons. Scholars divide the Stone Age into three sub-ages:

It was not the refinement in the design and production of stone tools, I commented to Dr. Pierce, which caused White devolution, but rather accompanying developments: the beginnings of agriculture, the domestication of farm animals, and above all, settled, permanent cities. Prior to urbanization and agriculture, our ancestors had lived in nomadic hunter-gather bands of 200 or less individuals. Life was physically difficult, so that only the most vigorous and healthy people survived: evolution advanced by way of natural selection. At the same time, however, everyone knew everyone else in their band, and the dominant social values were trust, honesty, communal effort and kinship.

With the beginning of urbanization, all of that changed. People then lived in huge settlements, in which everyone did not know everyone else. Kinsmen were still treated decently, but strangers were fair game for exploitation. Deceit replaced honesty and trust, and individual advancement and ambition replaced communal effort. Because city life was easier than hunter-gather nomadism, people with weaknesses found it easier to survive and reproduce. A merchant class arose, and those who were sly and successful in accumulating wealth found that they had a survival advantage over those who were physically robust and whose personalities were straightforward — artificial selection began to squeeze out natural selection.

Dr. Pierce agreed with me up to a point. Prior to the Neolithic Revolution, the White Man had to be the master of many survival skills, he noted. With urbanization, someone could survive by being a specialist — that is, good at only one thing. Rather than a specialist, our hunter-gatherer ancestor was “a jack of all trades, master of none,” in Pierce’s exact words. Thus the multifaceted personal strengths of our ancestors became narrowed down.

But Dr. Pierce’s assessment of when the evolutionary decline began was even more radical than that of Nietzsche. Dr. Pierce felt that the high point of White evolution had been reached in the Paleolithic era, and had begun to decline already with the advent of the Mesolithic (15,000 y.a.). At that time, the advances made in tool-making made it easier for the less-fit members of a hunter-gather band to survive and hence propagate. Further, Dr. Pierce said, the Mesolithic period also saw the domestication of the dog from the Asiatic red wolf. Dogs aided in hunting, which also made it easier for second-rate humans to survive.

I replied that whoever was right — Pierce, Nietzsche or Peel — we were in a bind. It was not possible to return to a way of life prior to the Neolithic or Mesolithic periods, or even back to before the Industrial Revolution.

“How are we to get White evolution back on track?” I asked him.

A key element in restoring the upward progress of our Race, he answered, was eugenics, both positive and negative — and especially racial eugenics. (Positive eugenics consists of encouraging the reproduction of people with desirable traits, while negative eugenics means discouraging or even preventing the propagation of those with undesirable characteristics.)

I replied that as a National-Socialist, I, of course, supported eugenics. But at the same time, I had a concern, namely that eugenic measures were themselves a form of artificial selection, rather than natural selection.

I mentioned Nietzsche’s Superman as the target in an evolutionary vector to be pursued. Dr. Pierce replied that while his works are certainly inspirational, Nietzsche’s Superman was an ambiguous and largely poetic concept, and that he had something much more concrete in mind.

It would be the task of a National Alliance government to administer the biological eugenic measures needed to restore the White Man to physical and racial health. The goal would be that each new generation would stand on a higher racial and evolutionary level than the preceding generation. At the same time, the Cosmotheist Church would be responsible for the spiritual evolution of the population. By this, he explained, he meant that it would see to it that the greater racial community would hold fast to healthy spiritual values, and that personal characteristics that were desirable would be extolled. Courage, honesty, and self-sacrifice, for example, would be the norm. Those individuals who were consistently unable to live up to these values would be relegated to the bottom of the eugenic hierarchy.

Our conversation then drifted off into different areas. It was clear to me that the subject of getting our Race back on track regarding its upward development was of crucial importance to Dr. Pierce. Although he had given the matter considerable serious thought, there were still things he was working out in his mind.

At the end of the evening, I told him that he had given me much to think about. He thanked me for my questions, comments and feedback, and we both agreed to continued our discussion concerning White evolution at a future date — which, sadly, we never did.

America and the World Food Crisis
The White Race and its Discontents
Marriage and Survival
Out of the Darkness
The Bite of the Adder, or Can Only Whites be Racist?
Ben Klassen on Marriage
Tomorrow's Religion
Background to Treason, part 1
Tags:CosmotheismEugenicsEvolutionGeneticsJames Hartingpre-historyRaceWhite EvolutionWilliam Luther Pierce 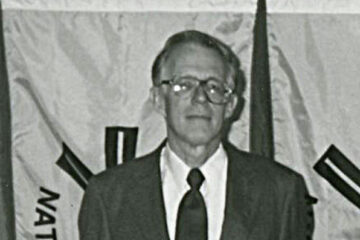 “It would be the task of a National Alliance government to administer the biological eugenic measures needed to restore the White Man to physical and racial health. The goal would be that each new generation would stand on a higher racial and evolutionary level than the preceding generation. At the same time, the Cosmotheist Church would be responsible for the spiritual evolution of the population. By this, he explained, he meant that it would see to it that the greater racial community would hold fast to healthy spiritual values, and that personal characteristics that were desirable would be extolled. Courage, honesty, and self-sacrifice, for example, would be the norm. Those individuals who were consistently unable to live up to these values would be relegated to the bottom of the eugenic… Read more »

Getting White Evolution Back on Track