Every American Christian patriot, who values his integrity and honesty, must ask himself one hard, cold, paradoxical, and (in terms of his own current belief system) unsolvable historical question, a question of the greatest significance to his failing nation:

Why is it that the historic founding population of the American republic joined with the British Empire and the Soviet Union to invade and destroy the folk and nation of National Socialist Germany — only eventually to be demonized, emasculated, demoralized, and defeated by the very same Jewry that America liberated from its quite evidently deserved punishment?

Indeed! — that one simple query is really just the summary of an endless parade of related and relevant rage-fuel questions which the American Christian patriot might also consider; for example:

Why did millions of American fighting men sacrifice themselves during World War 2, supposedly for the sake of Jews who now undermine all the progeny and the values that such patriotic men held dear?

Why is it the Jews insist that everybody acknowledge Jewish “suffering” as the worst in the history of all the peoples of the Earth, when this is demonstrably untrue? Moreover, why must you “care” about this to the point of your own self-destruction, under the fear that the ultra-powerful Jews might extort and defame you?

Why do you allow Jewish control of your Congress and courts and police to the point that your daughters are violated and your sons disinherited with virtual impunity and without any effective recourse to the law?

Why is it that the grandchildren and great-grandchildren of the mighty American “liberators of Europe” have now become slaves to Jewish media, international finance capitalism, big pharma, electronic surveillance technology (some of it in the guise of “social media,” the golem-US-Government, and the Zionist state of Israel?

Why do you keep allowing your sons to join the US military for the sole actual purpose of making war, killing, and being killed on behalf of the parasitic and terrorist state of Israel?

Why must your children become permanently indebted in order to be indoctrinated with Jew-mediated Marxism and self-hate at practically all public and private universities?

If you care so much about your fellow Christians, why is it you do not acknowledge that Bolshevik Jews viciously murdered the entire Romanov royal family of Russia and likely raped the daughters?

Why do you, therefore, refuse to recognize the Jew as the enemy of all mankind and of the Earth herself — and as your material and spiritual foe, who wants you and your children raped and dead and gone forever?

Why do you so bravely brandish your precious AR15 rifles while protesting at your respective state capitols, or in your latest coffee-pushing YouTube videos, or at your local firing range — yet you cannot bring yourself to even verbally name the Jew as your societal and racial persecutor?

Why are you, American Christian patriot, too cowardly and weak to stop the Jew from mistreating you and your children in your own homeland of America? Why do you not do something about it?

Source: based on an article at volkish.org; National Vanguard correspondents; copyright 2021 Fritz Maes

The Bite of the Adder, or Can Only Whites be Racist?
Disillusioned, part 1
The Destructive Media
Oliver's History of Terrorism
Detention Camps for American Jews?
Rethinking the Khazar Theory
$2.8 Trillion of Our Money Spent on Israel's Wars
The Organizational Strategy
Tags:Christian patriotsChristiansJewsPatriotism

An excellent article that in my view, really nails it. And there are others that have wondered what fraction of American society just accepts their enslavement and why? I believe the answer lies in the Biblical narrative of the Exodus. Moses went up the mountain to get The Law and was gone for an extended period of time. The People became uncomfortable in the absence of a leader and demanded that a golden calf be made for them to supply the missing leadership. And they bowed down to it. What is not discussed in any great deal in the narrative, is how Moses then got The People back to accepting his leadership rather than that of the golden calf? That is the key. The People don’t care about the quality… Read more »

Excellent questions for the Christian patriots, Fritz. ANSWER: Because they worship the Jew’s imaginary tribal god Yahweh aka Jehovah aka Allah, or whatever one wishes to call their ancient Middle Eastern spook. SOLUTION: Ditch otherworldly Jewish spooks for a belief system of the future for Whites that is grounded in reality. Cosmotheism: Religion of the Future by William Pierce (coming soon – now accepting orders) – Cosmotheism (cosmotheistchurch.org) “Deep inside all of us, in our race-soul, there is a source of divine wisdom, of ages-old wisdom, of wisdom as old as the Universe. That is the wisdom, the truth, of Cosmotheism. It is a truth of which most of us have been largely unconscious all our lives, but which now we have the opportunity to understand clearly and precisely.” Thus… Read more » 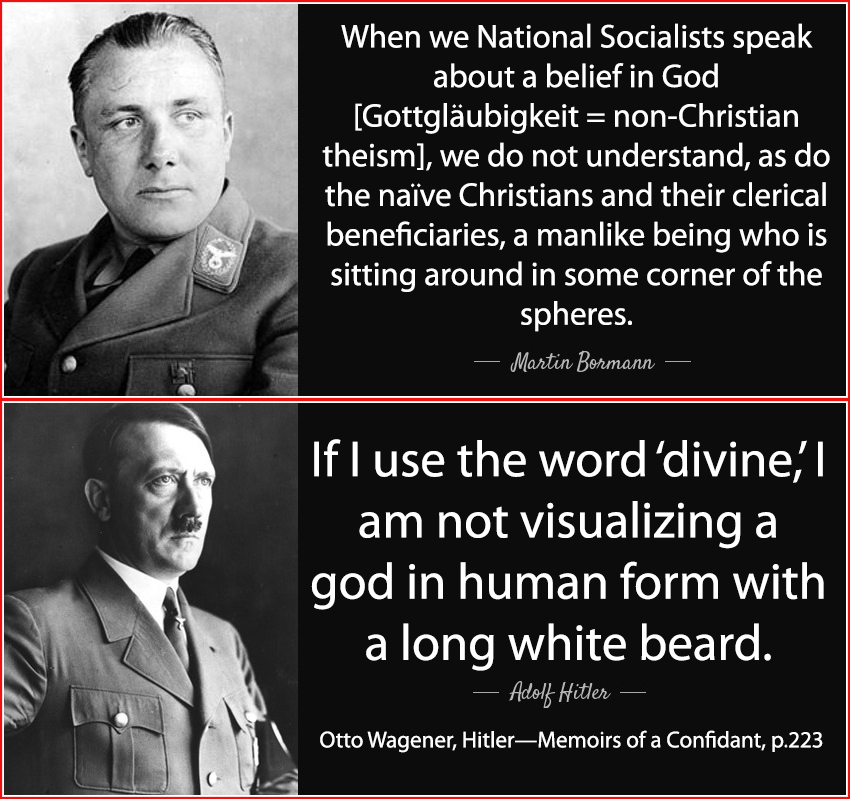 “If I use the word ‘divine,’ I am not visualizing a god in human form with a long white beard.[…] For me, God […] lives in the world, interwoven with it and pervading it, conferring on it drives and driving force, and constituting the actual meaning and content of the world. Perhaps the adherents of the Roman Church would call this ‘paganism.’ ” ~ Adolf Hitler, Hitler: Memoirs of a Confidant, Otto Wagener

“As for the Christian concept of God, Hitler definitely rejected it in private conversations. That I know even though in the course of the years I heard only two or three pertinent remarks. Once he told me: Look at the head of Zeus! What nobility and exaltation there are in those features! About communion: It is primitively religious to crush one’s God with one’s teeth.” ~ Dr. Alfred Rosenberg’s Memoirs

Simple it’s because it’s the Jewish poison known as (((Christianity))) has so thoroughly brainwashed them into “turning the other cheek” and “love thy neighbor” that these “people” will do anything for the sake of their delusions no matter has a horrible and downright suicidal it is for them and their kin. Unfortunately these “patriots” will never wake up to their delusions no matter what evidence you say or what questions you ask because they are domesticated. Enjoy the “comfort” while you can because it’s n my eyes the white race is finished

I have to agree and in history we can find in the past the non-believers of the Christian religion could be burned at the stake and many were, or hanged by the neck until dead and many were . Entire villages were razed because the Church deemed the entire place was filled with Pagans or Heathens as the Church called them. Today there are literally thousands, men women and children, that have the belief in the First Religion, but Paganism and Heathenry are not religions but a way of reasoning .

They don’t even seem to care about the recent killings of christians in the middle east as a result of our wars for Israel. Recently, I’ve seen them DEFENDING Israel on the basis that the Islamic nations kill homosexuals! And they wonder why they lose all the time even when their candidate wins.

Christians want to live forever in heaven; therefore the Bible must be true and the Jews must be God’s special people.

They ARE doing something
about it! They are all
lining up like the little
sheeple that they are, and
getting their KILL SHOTS
that they euphemistically
call “vaccines.” Inside of
two years, they will all
be either dead or seriously
compromised – and perhaps –
better off dead. Christians
solving the Christian
problem. I wish them
“godspeed” to that “holy
ghost” up in the sky, or
on the farside of the
Moon!

People have to realize the FACT that (((Christianity))) was designed to DESTROY ROME.
The fine brains of NS leadership acknowledged this. 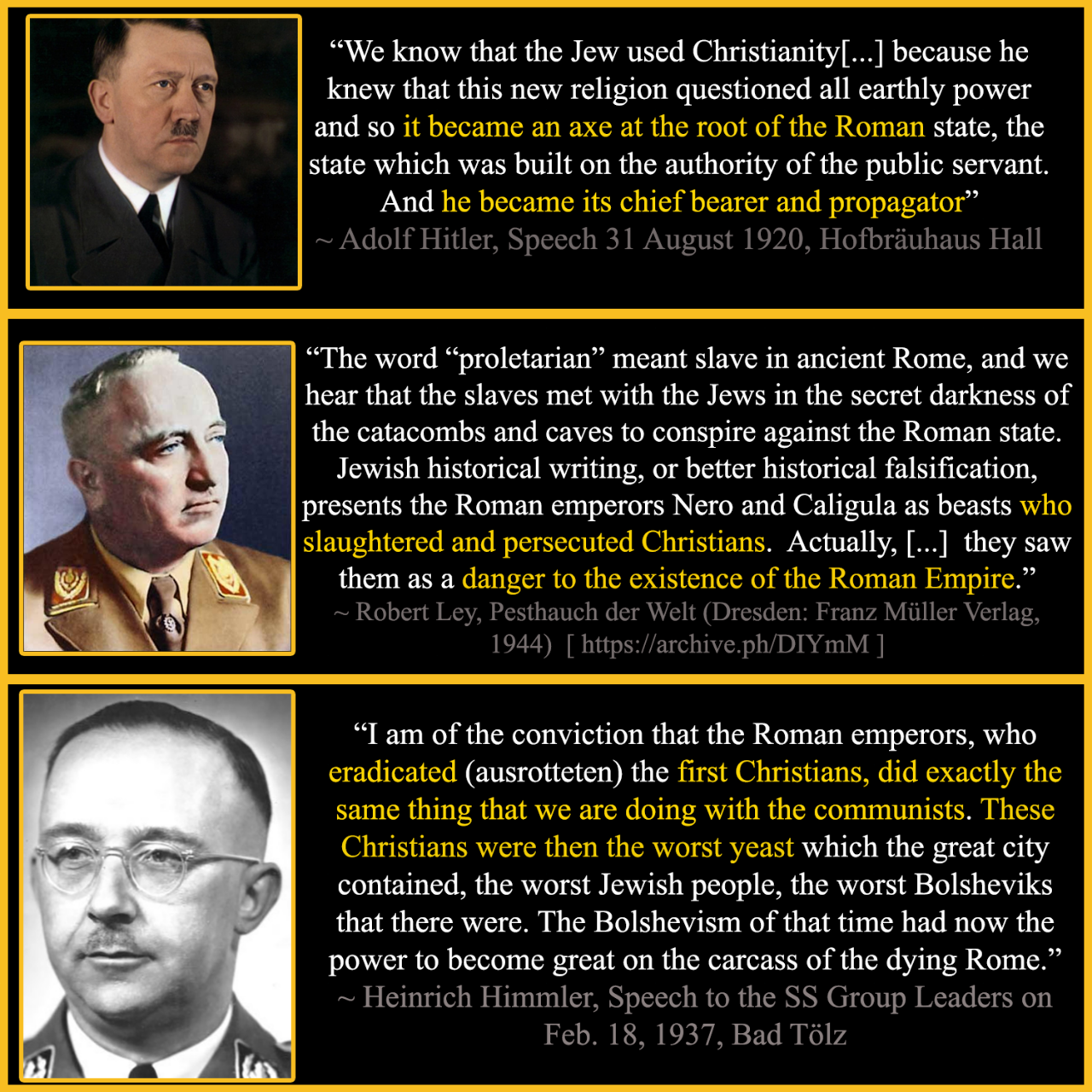 Liar Julius Caesar pays his debts in Rome by having the indigenous cultures of Central Europe destroyed – or, with mass robberies in Central Europe against Franks and Teutons, etc. – in this way Caesar paid his debts in Rome – up to England he destroyed everything until he got through Intrigue was murdered in Rome. The church followed him and completely destroyed the natives of Europe as far as Greenland ..

Everyone who studies true history / and the bible and who follows everyday political life sees that the same forces as then are now pushing us back into the abyss! https://blog.kareldonk.com/adolf-hitler-the-greatest-story-never-told/#comment-230349.

The goal we have been seeking for so much endurance over 3,000 years has finally come within our reach. I can assure you that our race will take its rightful place in the world. Every Jew a king, every Christian a slave. We aroused anti-German feelings in America, which culminated in World War II. Our ultimate goal, however, is the awakening of the Third World War. This war will end our fight against the Goyim forever. Then our race will dominate the earth undisputedly “Rabbi Emanuel Rabinowitsch, during a Rabinner meeting in Budapest January 12, 1952

>”Julius Caesar pays his debts in Rome by having the indigenous cultures of Central Europe destroyed “ The actual reason why Julius Ceaser had to invade Gaul, was because Gallia had the highest Gold reserve. “… So much gold was looted from Gaul that after the war the price of gold fell by as much as 20%.” When Flaccus’s son Lucius was governor he tried to stop (((their))) Gold trafficking, (((they))) responded to this intervention from Lucius Valerius Flaccus by accusing him of embezzlement and summoned him before the jury, Cicero defended him against multiple charges of financial impropriety during his administration Cicero claimed that Flaccus was merely “recuperating” the funds. “We come now to the libel involving the gold, the Jewish gold. This is obviously the reason why the present… Read more »

The White people , the White race had a belief it was in the boundaries of Nature the boundaries of the natural order , the seasons .They knew certain birds went south fo rthe winter and came back when the Spring came . The White race had an established belief system in the worship of Gods and Goddesses .Christianity as in the Bible came into their lives and over the following centuries that followed by full force or propaganda our ancestors nearly lost all of the natural laws and natural working order of the universe.The Christian holy book the Bible tells everyone to ” Be as sheep ” !…And many of our own have been persuaded to do this .Their Bible has had a serious detrimental effect on once such… Read more »