THESE PARTICULARLY obnoxious Black supremacists, the “Black Hebrew Israelites,” take joy in degrading White people. Their sect is a weaponized version of Bible-based and burning-hot Jewish hate, adapted to appeal to Blacks and directed mainly against Whites. The fact that they ostensibly hate Jews too does not change the fact that their hate-religion is a Jewish creation, as are all the Abrahamic cults.

More important than the weaponized Congoids, though, is the stunted mentality and degraded spirits of the Whites who would literally kiss the boots of these Yahweh-crazed primitives.

Kissing boots is just the start, just the public face of much greater horrors and degradations that are already happening in Jew-owned “film studios,” crack houses, and motel rooms across what used to be the United States of America.

Imagine how much programming you have to undergo to reach this pathetic state — whether you’re doing it for money or doing it for nothing.

Keep your precious children out of the public schools, where they are taught to hate themselves and abase themselves. Keep them off degenerate-ridden and Jewish-controlled social media. Keep them reading classic White literature, and racialist White literature, keep them studying the Aryan giants of science and the mysteries and laws of Nature, home school them no matter what sacrifices you have to make, and do not hesitate or “wait for when we can afford it” to bring them into this world.

Calling Out the Cuckery
Germany: State Television Promotes Racemixing, Conversion to Islam
What They Care About
Intolerable, Flagrant Injustice for Whites in America
The FBI and Jewish Organizations Invent Anti-White Coronavirus Conspiracy Theory
A Race That Has Been Subjected to Hate
I Guess That’s Why They Call It Jewgle
Tennessee Williams’ Baby Doll (1956)
Tags:Abrahamic religionsanti-whiteBlack behaviorBlack Hebrew Israelites

Those Whites are laughing. It’s a joke. A disgusting joke, no doubt, but still a joke.

It looks more like these 2 filth were PROUD of themselves…

I don’t know what it is about some Whites; certain ones have degraded themselves, and made fools of themselves, throughout my lifetime and before. Whether it is running around naked on college campuses, swallowing goldfish, packing people into phone booths—it all seems to be a childish form of foolishness that is supposed to show people that one who does such things is a lovable fool and not to be taken seriously, certainly not having any sort of dignity or gravitas; sort of like trading in one’s humanity to be a familiar but absurd hound. It it has always seemed to me to have a self-absorbed sense of cuteness to it, a spoiled insouciance to the seriousness of life. After all, not so long ago, people as young as 14 or… Read more »

After watching the first seconds of the video I would have answered the question as to whether it was staged with a clear “Not at all”, b/c the guy seems to have the typical physiognomy of a testosterone-deficient Cuck. That kind of behavior is to be expected.

But later the negroid Israelites ask for his name and he answers “Seth”, which is clearly a Jewish name. That’s also when you get a better look at his face and it looks somewhat Semitic. That still doesn’t mean it’s staged of course, but it makes the whole thing look very fishy. Maybe it is staged and they did it for the purpose of portraying the clearly gentile-looking blonde bimbo as submissive?

Perhaps — but there are non-Jews with that name, so I am unsure.

‘Why didn’t you stay in Mexico?’ Diversity and inclusion meeting turns volatile at Michigan school.

White, liberal, virtue signaling women are as dangerous to the whites in our society as Jews and minorities. How can we reach these brain washed traitors? Not one white woman or man stood up to defend the parent who asked the whining Mexican “Why don’t you go back to Mexico?” People enter our country illegally and uninvited. Then they have the nerve to brow beat the legal citizens, expecting us to cave to their every demand. White people need to start speaking up.

They will soon learn when they have no more power and are raped on sight when a minority. It will come, and that my friend is when you will see them all become RACIALLY AWARE, that will be the day we will unite, not until that day when things reach rock bottom, but it will come and it will happen. White flight will kick in en masse. The worst of the worst self hating white will learn the hard way, but have faith because they will learn.

Seeing crap like this makes it harder to resist the urge of not fedposting.

I remember the pope (I don’t even call him Pope Francis, to me he is just Frank), kissing the feet of those negro fellows a few years ago. I am embarrassed for him. How can garden-variety Catholics abide Frank’s nonsense? He wants white countries to take in unlimited refugees, is an environmentalist who says we have to acknowledge our “sins” against mother earth, and I think deep- down he has no big problem with faggotism and trannyism.

One of our leaders, recently, expressed disgust with Robert Griffin online for his religious leanings and their implications differing from his own. Dr. Griffin’s view is that he is very near the end of his life. One of my neighbors just had two heart procedures within a couple of days of each other; he’s 94 and is as-confused about World War 2 in which he served as most are and certain about “life-after death” because he was raised Catholic. And that looms large for him, these days. He pays a young “druggie” as he refers to the millennial pot head whom he uses as a handyman to take him to Mass each week. He pays the “young ‘man'” a lot of cash to drive him and sit in the car… Read more »

Listen to it! This is what’s at stake.

This is our culture that is being destroyed.

This is something that can’t be measured in GDP numbers or DCF models.

The only way for white people to survive the multicultural debacle (white genocide), created by the Jews, is to create a white ethno-centric religious mystic.
This image is the way..
https://ibb.co/7vNPWJn 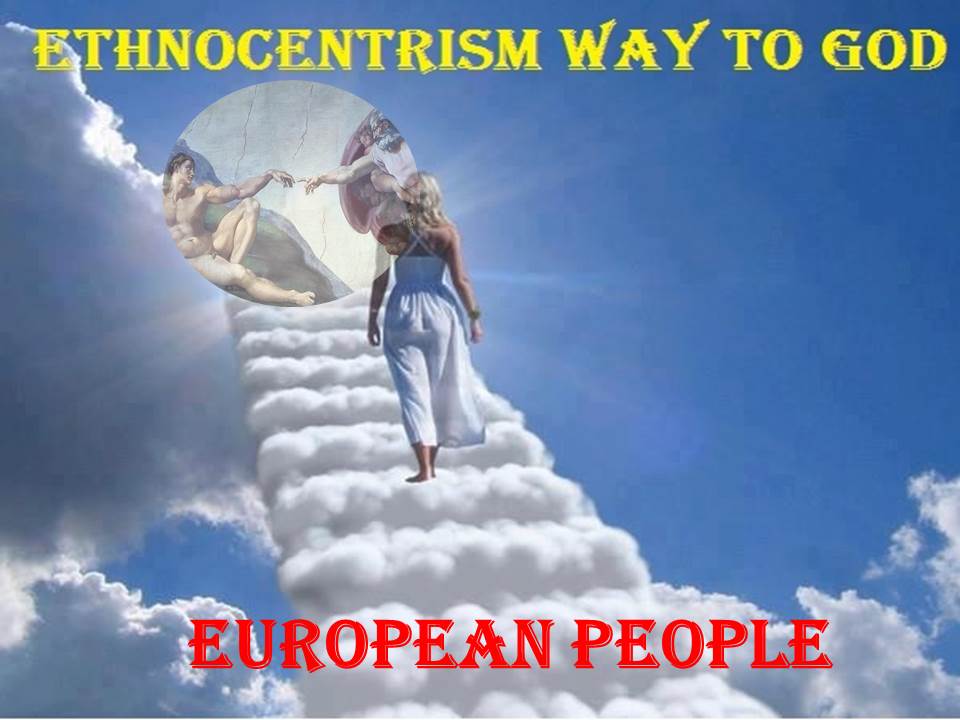 Sounds Cosmotheistic except at the top of this particular stairway to heaven Is Michaelangelo’s interpretation of the Jew’s imaginary tribal god Yahweh, giving life to His first imaginary Jew, Adam — hardly what White people need at all, for anything.

The message is ethnocentrism, the superior life force of survival and dominance. It is based on evolutionary reality with a mystical message. Actually Yahweh could be replaced by Zeus with a human appearance.

And what is it with that broad-shouldered and even broader-hipped nigress with the blond wig ascending a staircase of clouds to look at European art?

In my opinion it should be more in line with the Greek, Roman and Nordic deities. What about the most beautiful painting ever made, The Birth of Venus? 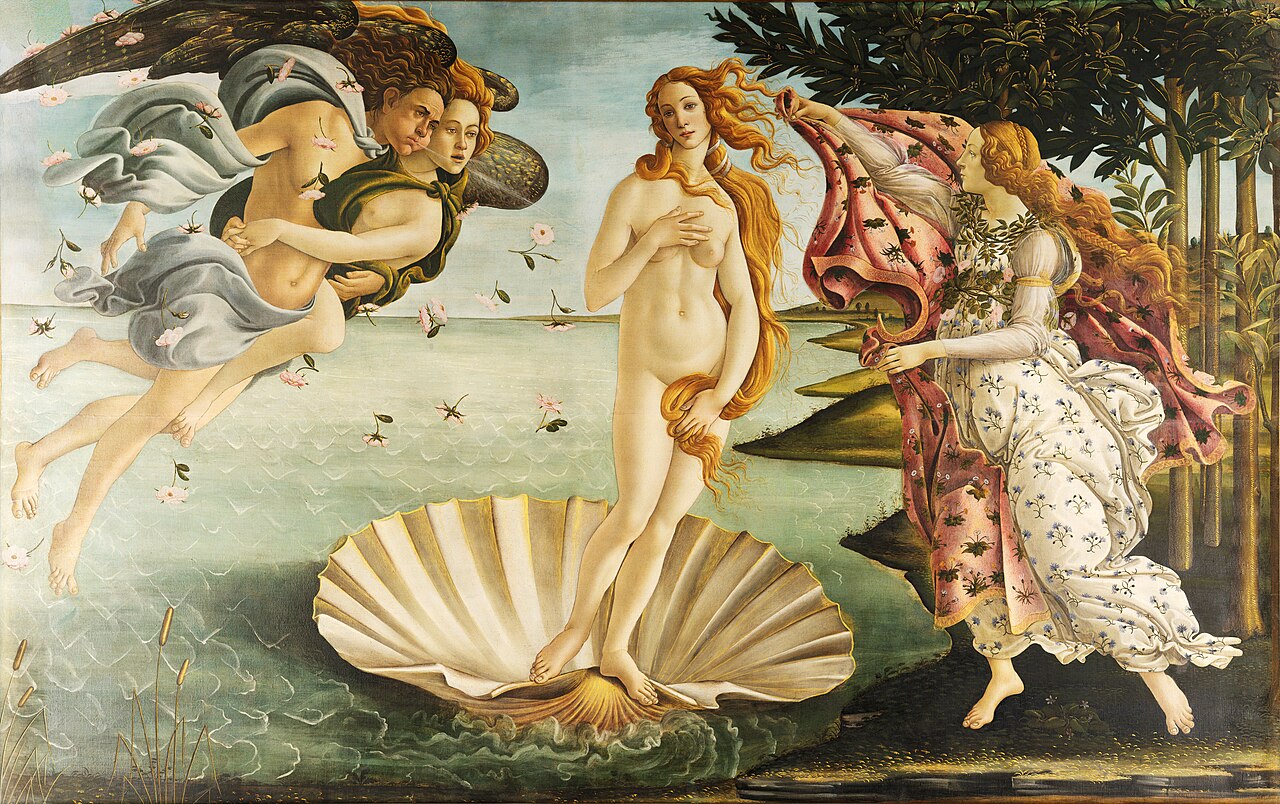 Yes Pandechi. How dare they attack our religion or our religious cosmotheistic freedoms.

Damn everyone involved in this filth. Those “(w)hite’s” dads are devoid of the spiritual strength of men!

These debased White fools should be flogged; those Yahweh-worshipping, wannabe-Jew c00ns should be shot out of a cannon!