IN THE WAKE of the so called “migrant crisis”, racialists predicted a massive surge of crime and terrorism in Germany. This prediction was based on the biological characteristics of the in-flowing migrants, (following) cultural incompatibilities, the adverse effects of racial diversity on mental health, the religious beliefs of some migrants, and the sex imbalance that follows from the overwhelmingly male inflow. Unsurprisingly, open borders advocates have disputed these assertions.

The graph shows the development of chosen types of crime between 2000 and 2017. According to the statistic, violent crime is, after a peak in 2007, only somewhat higher in 2017 (+1%) than 2000. Rape and sexual assault numbers fluctuated until 2015. 2016 has seen a large and 2017 has seen a massive spike in rape and sexual assault. Murder saw a large decrease until a spike 2016, and a slight following increase.

Additionally, the reader should consider that this graph doesn’t control for the fact that the FRG population aged dramatically between 2000-2017 (Median age + 6 years). Young people are generally over-represented in violent crime. So, crime decreases might be strongly caused by demographic changes, not FRG security policy.

As the reader maybe remembers, the gates were totally opened in the autumn of 2015. So, the prediction that the migrant crisis causes a massive spike in violent crime is false, if German federal crime statistics are valid.

There is a slight bump in 2016, followed by a slight drop. So there was an increase, but no major change is shown. Rape and sexual assault increased dramatically since 2015, however; the definition for sexual assault has been widened in 2017. The data for murder is more in line with racialists’ predictions; after years of a downward trend, murder increased massively in 2016 and moderately in 2017.

So what evidence is there against the validity of the German federal crime statistics?

The first issue is with the methodology, for example: the statistic lists only crimes that have been processed completely by the police. Non-processed crimes are not part of the statistic. For example: in Berlin 55,000 crimes have not been processed and are therefore not part of the statistic (3). Secondly, if someone commits a crime in a series, or one instance against several people, it is counted as one case. If a group of several criminals commits a crime together, it is seen as a single crime/case in the statistic. Collectivist non-Whites like, for example, arabs, often commit crimes in groups, so this practice can massively downplay the real extent of criminal activity. Also, if several crimes are committed in one instance only the crime which carries the largest penalty will be recorded (4).

The second issue is the obvious political bias of the police. The most well-known case is the mass assaults on German women on New Year’s Eve 2016. The police claimed a largely peaceful night until several media reports forced them to admit the crime spree of settlers from the islamic world. A more recent example is the aftermath of the rape murder of the jewish girl, Maria Feldmann, by an Iraqi settler. Somehow, it revealed that the Iraqi raped another girl multiple times over the course of several months and didn’t get prosecuted. It is suspicious that action was only taken after the jewess was killed.

In the case of the rape assault of an African on a camping couple in the bonner siegaue, Police did first not take the emergency call seriously, probably because they (she) thought it was some kind of racist joke. The policewoman just couldn’t believe an African would threaten a couple with a machete and rape a woman. Another is the video of Markus H. getting beaten to death by an Arab settler which was considered self-defense by the state prosecutor because he reacted with a smack to a shove from the Syrian (5).

Such cases obviously don’t prove the systematic bias but strongly point towards it. However; some police officers have already admitted that they don’t prosecute minor crimes of so-called asylum seekers (6). An indicator which points towards political bias is that so-called asylum seekers are more over-represented on more major crimes (for example 14.3 % of crimes against life and 10.6 % of bodily harm) (7). It is obviously way harder to cover up a murder than minor crimes.

The third issue is the dark figure of crime. There are already large sections of Germany which are no longer under the control of the German government, and are instead controlled by gangs and foreign clans. Crimes which occur in such parallel societies will often not make it into police reports because victims are intimidated, don’t consider the police legitimate, or they will take their grievance to an unofficial sharia court.

Also, the German police are overstretched. The average federal police officer accumulated an average of 53 hours overtime in 2017 (8). Probably, frontline officers will have more overtime than bureaucrats. An overworked police force is less motivated and capable of fighting crime.

Some people also might be afraid to report non-white criminals because of the political climate in Germany, where social life and career-threatening accusations of Nazism are part of everyday life, or because they are afraid of revenge attacks. Especially if you consider that even major crimes often carry only small punishments in Germany, thus guaranteeing a speedy opportunity for revenge.

To conclude, the German crime statistics are not a trustworthy measurement of crime in Germany. The German government has a massive incentive to cover up the extent of settlers’ crimes to not give fuel to anti-immigration parties. It is, however, not likely that the numbers are faked directly, and much more likely that this is achieved through different mechanisms like the probably deliberately flawed methodology, political influence on police activity, and indoctrination of police officers and populace. We also have the hard provable facts of biological science that people with certain characteristics are more prone toward violent crime. Characteristics, like for example: IQ, psychopathic personality, genes associated with violence, testosterone levels, impulsivity, and so on are unequally distributed between races. So, there is already data, undiluted by the political bias of the German government, available to prove the higher propensity towards crime of some non-White groups compared to Whites.

History Is Being Erased

Eye on the News - The End of America: The Student Loan Scam and the Return of Debtor's Prison 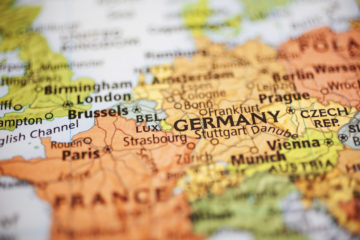 How did Germany come to this? At the present rate, like Sweden, they’re dead. And I don’t feel so good myself.