THE TRIAL IN GERMANY of a former SS guard at the Stutthof camp has taken a dramatic turn with the declaration by the accused that he never saw any “gas chamber” or any mass murders of any sort at the camp.

According to holocaust scholar Peter Winter, author of the best-selling The Six Million: Fact or Fiction, the 94-year-old former SS man who served as a guard at the Stutthof camp has told the court that during his two years’ service he never saw a “gas chamber” or atrocities at the camp — a truthful statement because there was no “gas chamber” at that camp, only a clothing disinfection chamber.

“Johann Rehbogen — who can only be identified as ‘Johann R” in German media — adopted the usual tactic of those being prosecuted in Germany for being camp personnel — that of not contesting that atrocities took place (a defense which is illegal in Germany) but rather just saying that they never saw or took part in any such activities,” Winter wrote, before continuing:

A report of Rehbogen’s 18-page statement to the court, as carried in the Allgemeine Zeitung newspaper, confirmed this in its (blatantly biased) opening paragraph, where the journalist wrote that the defendant was “not remembering anything which could be dangerous.”

Rehbogen is accused of “aiding and abetting” murder in “hundreds of cases,” including the “gassing” of 100 Polish prisoners in June 1944. Although he “does not deny being in the camp,” he says he “neither heard anything nor was involved” in any of the “crimes, the atrocities, and the murders,” the Allgemeine Zeitung said.

His statement said that he was conscripted into the SS in 1942, and while at the camp, saw the “poor conditions of the prisoners” and also “saw corpses” but knew nothing of the “crimes, the murders, the gas chamber, the shooting-in-the-neck system [of execution].”

In 1944 he was transferred out to the Western front where he served for the rest of the war, his statement ended.

Rehbogen’s denial of ever having seen a “gas chamber” at Stutthof is correct: there was no “gas chamber” at that camp, merely a small clothing disinfection chamber located close to the small camp crematorium.

This is also why the media coverage of the trial will make reference to “gas chambers” but will generally shy away from showing pictures of the “gas chamber” — because it is so patently not one, despite visitors to the camp being told that it was one. 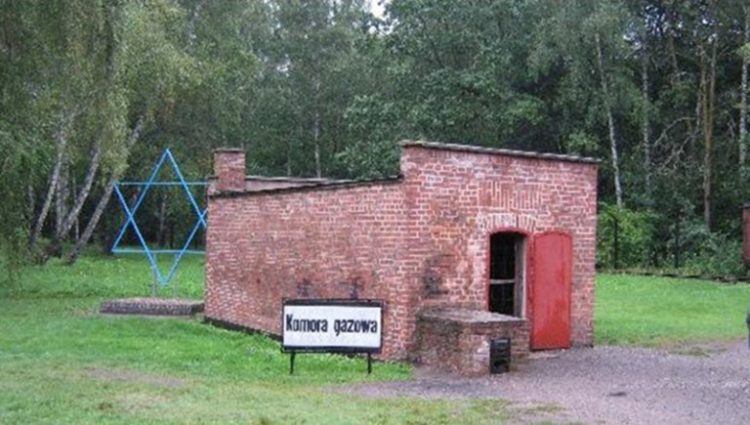 The fact that Rehbogen has denied ever seeing a “gas chamber” or any mass executions is however bad news for the Holocaust Storytellers, as they were hoping that this trial — perhaps one of the last ever — would produce a “confession.” Obviously, it has not.

At 94, this man has nothing to lose by telling the truth. His fellow SS men from trials in decades past were often threatened and coerced into a false narrative.

Not just coerced, but tortured. Rudolf Hoss once said that if his Jewish torturers wanted him to admit he murdered 5 million Jews (instead of 2 million or so that he’s on record as having “confessed” to) he would have said he did. His torture almost killed him, someone had to stop the Jew (a “British” sergeant) from finishing Hoss off.

Roger this, kamerad Wright. A perfect example of how stupid the Enemy can be. How can a German nonagenarian be coerced? Threatened extinction of his culture and race? Nonstop slander/libel? He has endured that and more already. Can you imagine his quality of life in Enemy-occupied Germany these past 73 years? Torture? Death? He sees the light at the end of the tunnel, and welcomes it. He would survive the kind of torture in which those perverts revel for no more than five minutes. They’d be doing him a favor. Therefore, he is free to tell the TRUTH, and hold it up like the proverbial cross in front of a vampire, without any possible consequences. He has endured and WON.

Axis Sally , thanks for your comments- and comments from those of you previously. This wonderful portal of information has quickened my resolve to gather more information. I’d always suspected Wiesenthal’s efforts over the yrs has been to silence anyone eyewitness accounts of what actually happened. Skål