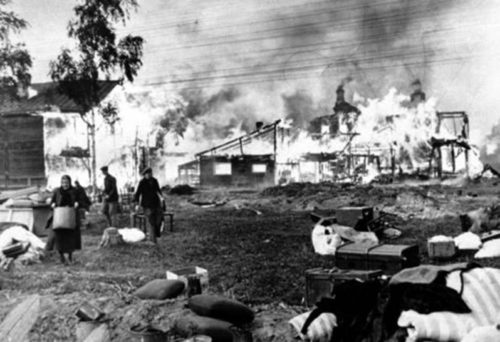 VERY FEW PEOPLE know the details of Joseph Stalin’s notorious Torch-Man Order. As a consequence, people little realise that many images depicting German atrocities are falsified. These oft-seen filmed atrocities were the responsibility not of the Reich but of England and America’s Soviet allies. There can be no excuse for using images of one’s own crimes to stigmatise one’s enemy. To do so to justify war is a war crime.

The real banality of evil is that the Torch-Man Order is censored in the West — disguised behind the bland name “Order Number 0428.”

The details of this disreputable Order have now been confirmed as accurate by the Russian government. Stalin’s Order 0428, authorised November 17, 1941, instructed Bolshevik irregulars to destroy everything within 40 to 60 kilometres of the rapidly advancing German forces.

Stalin’s burnt earth policy was not what it is claimed to be — a strategy of depriving the Axis armies of sustenance. Stalin realised that these communities, terrorised by the Bolsheviks for over 25 years, welcomed the invading Reich armies as liberators. Churchill’s ally also knew that upon liberation entire Central European communities would assist the German forces. In Stalin’s eyes the peasantry were already collaborators.

The Torch-Man Order’s purpose was to indiscriminately slaughter communities before their being caught up in the German advance. That order gave specific instruction that trained irregulars, wearing uniforms of captured and killed German troops, should indiscriminately kill peasants on an industrial scale. Especially sought for this purpose were uniforms of the Waffen SS.

1) The Reich controlled Europe between Moscow, Finland, and the Black Sea. Why were these atrocities carried out only on Soviet territories before their being occupied by the Reich?

2) Why would any army film and widely distribute images of atrocities that would reflect badly on them and later cause them to be indicted on war crime charges?

3) Where is the logic in an advancing army destroying its means of sustenance and support as it advances?

These are questions of logic that simply cannot be answered in a way that would support the victors’ spin. For such reasons open debate in public or on the controlled media in the West on this topic is off-limits.

In fact, the German policy was precisely the opposite to that of Britain and America’s ally. The function of the Reich’s Ostacker Program (Eastern Fields Program) was to restore the lands and return rural property to the peoples of the regions occupied by the German forces: (Archive Series 429, roller 461, General Use Division, Foreign Units East li H 3/70 Fri 6,439,568th Filed: National Archives Washington).

The Torch-Man order signed by Stalin was released by the Russian government. The Order specifically carries instruction that it was “important to leave a few survivors who would report the supposed German terror attacks.” This strategy was confirmed by Axis troops who, having taken into captivity partisans wearing Reich uniforms, conceded their reason for doing so.

Order Number 0428 is quite specific and uncontested:

All settlements, in which German troops are found, up to a depth of 40-60km from the main lines of battle, are to be destroyed and set on fire; so too all such situated 20-30km from the roads. For the total destruction of the settled areas the Soviet Air Force will be made available. Artillery and rocket launchers will be used extensively, as well as intelligence units’ skiers, and Partisan divisions equipped with bottles with flammable liquid. These hunting expeditions in their activities of destruction are to be dressed to the greatest extent in German soldiers’ uniforms and uniforms of the Waffen SS looted from the German Army.

This will ignite hatred toward all fascist occupiers and make the conscription of partisans from the outlying areas of fascist territories easier. It is important to have survivors who will tell about German atrocities. For this purpose every regiment is to form hunter units of about 20-30 men strong with the task to detonate and incinerate the villages.

We have to select brave fighters for this action of destruction of settled areas. These men will be especially recommended to receive bravery awards when working in German uniforms behind enemy lines and destroying those settlement outposts. Among the population spread the rumour the Germans are burning the villages in order to punish the partisans.

The images distributed by the Soviets and their American and British allies depict graveside images of captives being shot in the back of the head. This method of execution was exclusively a Soviet CHEKA / NKVD method of mass killings. The forces of the Reich used conventional means to dispose of those marked for execution and did so within the constraints of international law.

Cui Bono (the legal term for ‘who benefits?’): Again, logic suggests that only the Soviets would benefit from carrying out, photographing, filming and distributing images of these atrocities. The intention was to create an anti-Reich psychosis and encourage partisan recruitment. The strategy was also useful in providing the Soviet’s Western allies with propaganda that would assist their war against the Workers’ Reich. In other words these crimes are solely and exclusively the responsibility not of Hitler’s Germany — but of the Soviet Union, Britain, and the United States.

The Jews Closest to Donald Trump

We Fought on the Wrong Side

Do you trust your honest, impartial, professional and competent media people?

Test them. Send their historical section a copy of this article and see whether they publish it.