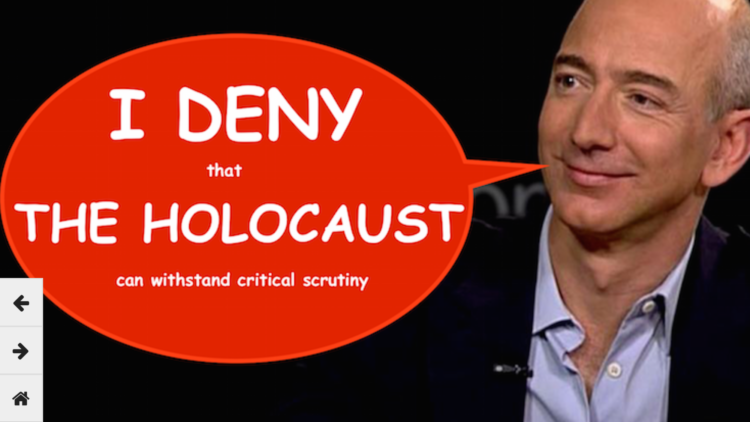 And so, under pressure, censors and removes historical works of which Jews disapprove; how large will their “banned list” get? What are the Jews hiding? Truth does not fear investigation.

Editorial Note by Kevin Alfred Strom: Giant, oligopolic sites such as Amazon are de facto public utilities and should be treated as such: They should not be permitted to censor public debate on ideas of significance. We should immediately put public pressure on Amazon to reverse this decision.

A FEW DAYS AGO, a lunatic Israel-first group calling itself “United With Israel” urged its mostly Christian dupes to participate in the Jewish pressure campaign to intimidate Amazon to stop sales of books that “deny the Holocaust” — that is, books which historically examine Jewish WW2 atrocity claims and find them wanting. Their boilerplate is copied almost word-for-word from that issued by many Jewish organizations in the past week or two in a tightly-orchestrated campaign.

The online retailer Amazon caved in to the pressure and has stopped selling three “Holocaust denial” books after Jewish groups insisted that they stop selling any books of which Jews disapproved on the topic.

Jews have demanded such censorship for years, but the recent Jewish campaign to convince the world that “anti-Semitism” is an exploding, out-of-control “crisis” prompted Robert Rozett, a senior official at Jewish “Holocaust remembrance” group Yad Vashem, to orchestrate the latest pressure campaign on Amazon CEO Jeff Bezos — in which hundreds of Jewish and Christian groups called for “immediate action” to censor historical works that dispute Jewish claims.

On Wednesday morning, the three titles that Mr Rozett had mentioned in his campaign were suddenly unavailable for purchase. Two were not showing up in searches, and one was listed but with a note saying that it was “under review” and could not be bought. This was the case for both US and UK stores.

Mr Rozett said the company had taken a “positive first step” which showed that they were listening to him and other Jewish groups that echoed his demand, such as the World Jewish Congress.

The titles in question were: Holocaust: The Greatest Lie Ever Told, by Eleanor Wittakers; The Hoax of the Twentieth Century: The Case Against the Presumed Extermination of European Jewry, by American professor Arthur R. Butz and Did Six Million Really Die? by Richard Harwood.

Amazon did not answer a request to comment for this article, and did not inform Mr Rozett that the books were being taken down.

Mr Rozett said the real test will be whether it takes related steps to stop feeding antisemitism.

“It’s a complex problem because Amazon is selling books, carrying reader reviews which defend them, and then Amazon recommends related titles to people,” he said.

Mr Rozett wants to know that Amazon will ensure that no Holocaust denial titles are sold, that no review sections on its site are used to propagate denial, and that people who bought denial books in the past are not being recommended books “that are likely to strengthen anti-Semitic beliefs based on their purchase history.”

Jewish Board of Deputies Vice President Marie van der Zyl indicated that this censorship is just the first step, saying, “Should any member of the public find further offending works, please get in contact with us and we will report them using the appropriate channels.” 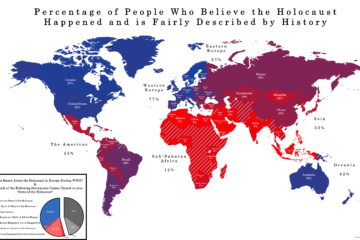 The list is whole lot longer that just three books. There are closer to 40 or 50 titles that are no longer available, according to Germar Rudolf. Even the reviews for all the books have been “disappeared”. This is of great concern for several reasons. Since Borders Books closed several years back, there is now only one coast to coast book retailer in the entire U.S., Barnes & Noble. Because many places in the U.S. do not have access to a Barnes & Noble store, millions must use the internet to order books. By destroying access to books in this way, through the internet’s largest book supplier, the Jews institute a de facto ban. How many people will actually be aware of tiny retailers like The Barnes Review where such… Read more »

My view is that the Jews are running scared. My
“mainstream” news-source is Yahoo.com, and not
a single day goes by without them whining about
something.

I wish we could remove the bloody kikes from our lands. The bastards just keep pushing and pushing.

“We MUST start saving hard copies of all this information. Who knows how long digital versions will remain available or even “accurate” or unadulterated? We also must start sharing this information and teaching each other.” DOBE

Too many think that these books and information will always be available… digital could disappear in a flash. Save this information. I see so much censorship going on at every source… buy physical books, download any source you can print you can…

Yes saneworld. The physical books are a primary source of information. Save them. Save the books that contain false accusations made by jews. They rely on the weakness of public memory. Become a Notary or Justice of the Peace. Even if you cannot store a large number of books, copy the most important pages and certify them as true copies. The book ‘Fahrenheit 451’ was meant to alert us to preserve books. The notorious book-burners are the jews, not the evil NSDAP.