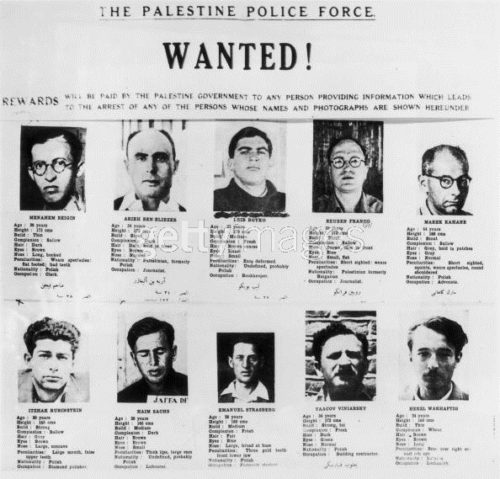 THE CALL TO British military security forces came early in the morning, shortly after 1 a.m., and could not be ignored. The informant’s message was alarming: Assassins planned to kill the commander of British forces in Palestine the following morning; evasive action was needed. (ILLUSTRATION: This a declassified document released by the British Security Service made available Wednesday Sept. 28, 2016. UK opened secret files about ‘Jewish terrorists’ in 1940s. The newly declassified British security services files document repeated attacks by ‘Jewish terrorists’ trying to drive British forces out of Palestine in the drive toward establishing a Jewish state. The files show how British agents tried to contain the threat of militant activities and keep the groups from launching attacks in Europe and Britain.)

The source didn’t know the details of the plan, but warned that Gen. Evelyn Barker would be attacked on the brief journey between his home in Jerusalem and his office at British headquarters. The assailants were militant Jews from the Stern Gang, determined to drive the British from the land in their bid for Jewish sovereignty.

Before dawn broke on Nov. 14, 1946, according to secret documents declassified Wednesday by the National Archives, Barker’s security team was notified of the imminent threat. He changed his route, other special precautions were put in place, and he arrived without incident.

Barker was particularly controversial because of his incendiary comments after militants bombed Jerusalem’s King David Hotel, used by the British as a political and military base, in July 1946, when Britain was still the administrative power in Palestine under an arrangement worked out in 1920, but was increasingly unable to control events as Jews and Arabs sought control.

The King David Hotel blast killed more than 90 people and infuriated Barker, whose offices were in the hotel.

He reacted by banning British troops from having any social or business dealings with Jews, saying that they would be punished “in a way the race dislikes as much as any, by striking at their pockets and showing our contempt for them.”

The plot against Barker is only one of hundreds of plans described in the newly public files that detail how British officials were tormented by the militants. The official British attitude toward the Jewish underground is summed up on the file’s title page: “Jewish Terrorist Activities in the Middle East.”

British influence was waning and the militants sensed a lack of resolve that could be exploited, said Saul Zadka, author of Blood in Zion: How the Jewish Guerrillas drove the British Out of Palestine.

“They realized getting rid of the British was the key to establishing Jewish sovereignty in Palestine,” he said.

“The British didn’t have an end game, they didn’t know what to do, and the insurgents’ operations affected the morale of the armed forces very badly. The British papers were saying, ‘If you can’t control Palestine, just get out.’ And it was very expensive to keep 100,000 soldiers there. So overall, holding onto Palestine was not worth it. The cost was too high.”

It is clear from the files that the British were rattled by the constant threat of attack and by fears the violence would spread from the Middle East to Europe and, particularly, to Britain itself.

A July 20, 1946, letter from Lt. Col. Maurice Oldfield to military headquarters warns that two people on the “Jewish Terrorist List” seemed to have infiltrated Paris via an Air France flight.

“This indicates a weakness in our controls,” he said, raising concerns that many more people supposedly being watched “may already, unbeknown to us, be scattered throughout Europe.”

The operational challenge facing British security officials in 1946 was in some ways similar to the ones faced today as Europe’s intelligence agencies try to keep Islamic extremists from entering Europe to launch attacks against civilians.

The files contain an official “top secret” request for “special attention security check of all Jews travelling to the U.K.” because of the security threat posed by the Stern Gang.

The files also reveal how closely British secret services tracked relations between militant groups like the Stern Gang and Irgun amid fears the rival groups would start to cooperate on joint attacks.

A secret note written on April 14, 1947, warns that a reliable source had told British agents about an agreement between the Stern Gang and the Irgun group to coordinate policy and plans.

“The main point is that terrorist activities are not to be confined only to Palestine — but will take place also in the U.K., France and Italy,” the note says, adding that “certain Jewish terrorists” have already arrived in the port city of Alexandria, Egypt, and have purchased a 200-ton ship to be used to transport weapons.

The plots described were many and varied, including a failed plan by militants to blow up the British destroyer Chevron off the coast of Haifa. The files indicate that plotters left a bag of primed explosives and detonators on board and were later arrested on land with concealed explosives.

The files also detail successful kidnappings carried out by the gangs.

The sporadic but deadly attacks spawned extensive British discussions about whether Foreign Secretary Ernest Bevin could travel safely to Cairo without undue risk of assassination.

Many attacks were relatively minor, involving small arms fire, grenades, improvised explosives and land mines, but the campaign clearly made it hard for the British to conduct normal business without adding layers of protection. Railways, bridges, government facilities and officers clubs were all targeted.

The state of Israel was proclaimed in 1948; some of the militants went on to become influential figures, including future Israeli prime ministers Menachem Begin, who would sign the landmark Camp David peace accords in 1978, and Yitzhak Shamir.

The Little Girls of England
Overcoming AIPAC Is Not Enough
$2.8 Trillion of Our Money Spent on Israel's Wars
German Summer Fair Ruined by Foreign Invaders
Correction, Jew: Blacks Are Indeed Far More Likely to Rape Than Whites
This Must Not Be Countenanced
The Fake Voltaire Quote Again -- This Time from Eric Margolis
Morocco, Land of Endless Hassles - part 3
Tags:BritainIsraelJewish TerrorismJewsMenachem BeginMiddle EastPalestineViolence