Bilderbergers? Globalists? Let’s Call Them What They Really Are: Jews

Attacking the Bilderbergers will not cause you to be banned from Facebook or Twitter, much less cause you to lose your job.

Christopher Cantwell attended the protest outside the annual conference of the Bilderberg Group, this year at Chantilly, Virginia, where he interviewed several protesters, all of whom avoided saying anything explicit about race or Jews. Two of them were associates of Alex Jones, from whom one obviously could not expect much. Cantwell then gave this little speech wherein he indicated that Jews were the real problem.

This needs to be said, because “the Bilderbergers,” “the Trilateral Commission,” and “the Council on Foreign Relations” have been used for decades as substitute terms by people like the John Birch Society who are paralytically frightened of saying the word Jew — even where it is the only correct word to use.

For example, the talkshow host Lionel, who makes frequent appearances on Russia Today, is clearly highly averse to saying anything negative about Jews qua Jews, or about even Jews qua Zionists. When RT’s reporter Caleb Maupin (who knows his stuff) recently said on Lionel’s YouTube show that Israel was behind the trouble in Syria, Lionel instructed Maupin that he must not say this; he must say that it is about oil or a pipeline instead. Well, unsurprisingly, on the same day that Cantwell posted his speech to the protesters, Lionel told audiences on YouTube and on Russia Today that the Bilderbergers were tier one of the globalist conspiracy, or words to that effect.

There is no social stigma or penalty incurred by criticizing the Bilderberg Group but the strongest possible discouragement against any criticism of Jews.

Little by little, however, that prohibition against criticizing Jews has been losing its power. It is an intimidation that is destroyed through overt defiance. When somebody responded to Cantwell by calling him an anti-Semite, Cantwell said, “I am, yes!” and continued unfazed.

The Russia Today (RT) network is Russian mass media, and since Russia is firmly in the hands of Jewish control, so is RT by association. Naturally, RT will never finger the Jews directly or even indirectly because it’s owned by billionaire Jewish media moguls, just like the rest of the global media. The hour is much too late to play around with code names for the Jews. We must name the enemy now if we ever intend to wake people up. If a website, media outlet, or so-called White media spokesperson cannot or will not say the J-word, they are most certainly controlled opposition and should never be heeded or patronized–ever. Are you hearing this, Alex Jones, Paul Joseph Watson, Stephen Molyneaux, Jared Taylor, Gavin McGinnis, everyone at Breitbart and… Read more »

I agree that even renegade Jews, Jews who oppose their own power structure/establishment, often have a hidden or not-so-hidden pro-Jewish agenda in that they believe it is simply not in their people’s interests to continue their genocidal and/or deceptive activities. We should always remain aware of that.

However, I don’t agree that we can’t trust anyone who republishes material by these renegade Jews. As long as they are published or quoted within a proper Jew-aware overall context (as they are on National Vanguard), I think it’s fine to make our readers aware of what they’re saying, some of which is quite enlightening. And, of course, dissension among our adversaries is always to be desired and encouraged.

Chris has come a long way. If you can overlook his raw cussing (which actually doesn’t bother me at all, being that I cuss too, especially when angry), his show at YT is pretty dang good. He also has a website: https://christophercantwell.com/

I wish more ‘libertarians’ would involve themselves in a bit of critical thinking and make a similar journey, like Chris has done. If that were to take place, we’d be at the door to victory.

This is a great video and features a great example of one man activism, which takes a lot of courage.
Christopher Cantwell is to be congratulated. If only we had another 1,000 like him!

I had an opportunity to meet Jared
Taylor at a SCCAC meeting around
two years ago. I displayed to him a
copy of “Which Way Western Man.
He dodged it as Dracula would dodge
a silver bullet or a wooden stake. The
hypocrite damn well knows what is
going on.

A necessary and concise memorandum of ever defensive jew “organizations” so the passive , benign jew protects itself from persecution. It is an armory of shields marked with a symbol of peace. Behind the shield is the dagger of sinister war and treachery . Also a self reproach of how we proudly finance our own destruction.

We must never apologize to the jew or their N(j)ew World Order. I oscillate between jew or their imposed religion on us being the greatest problem. god’s chosen? How stupid of us Goys to believe this. 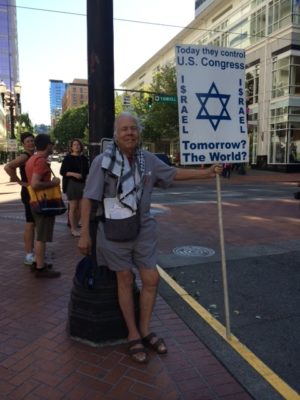 Bilderbergers? Globalists? Let’s Call Them What They Really Are: Jews