And it isn’t only the cost of housing, policing, coddling, imprisoning, feeding, and paying them forevermore: Now we are expected to essentially give our daughters and our entire nation to them.

NO BLACK person is British. “British” isn’t a political category; it is an anthropological category. All Britons have primarily Celtic ancestry, with possibly some mixture with Germanic migrant tribes, such as Angles and Saxons. The same concept applies to the word “American” and the names of other White nations.

Blacks are just Blacks, and most Blacks are “persons of African ancestry.” (There are a few groups who look similar to Blacks who actually belong to races of dark-skinned people not native to Africa, such as the Negritos of Panay in the Philippines, or the Australoids from Australia and Indonesia, commonly called the “Abo” for “Aborigines.”)

They don’t become Irish by moving to Ireland, or French by moving to France, etc., as this would necessitate an impossible alteration of their ancestries from what they really are to that of peoples autochthonous to Europe.

Elon Musk, born in Africa, is nevertheless a man of European ancestry, primarily English/British. Of all the people who came from Africa, only he, a White man, started three billion-dollar companies in the United States and revolutionized industrial activity on all three occasions: payment processors, automobiles, and spaceflight.

The confusion of labels was intentionally created by the Jewish-run mainstream media and by leftists in the government-controlled schools. These are the same leftists that, more recently, have begun introducing young children to pro-homosexual propaganda and homo-pornographic “textbooks.”

The White-Black achievement gap exists everywhere: in every country, in every school. The only instances in which the achievement gap appeared to have been closed turned out, upon investigation, to be the result of fraud. One example of such fraud is the 2010 CRCT cheating scandal in Georgia, especially in the Atlanta Public Schools.

Whites would have made great achievements without Black slaves. Certainly, enslaving Blacks was a great mistake, not only in the moral sense. It was also an economic blunder and a social catastrophe, the effects of which linger to this day.

However, the oppressive results of slavery on Blacks, however, don’t really linger into the present; that’s just an excuse that leftists make to obfuscate real, biology-based racial differences.

Without Blacks as slaves, mostly used as cheap farm labor, Whites would have plowed and hoed their own fields and picked their own cotton. Blacks weren’t necessary to building America, and, given what happened to the country after Whites relented from slavery, their presence over the entire history and pre-history of the United States has had profoundly net negative effects. They’ve cost far, far more than they were ever worth.

Henry Ford: The Leo Frank Case -- Are the Jews Clever?

The Man to Come

When you consider the public costs of negroes which considers education, transfer payments, legal system, incarceration and taxes paid, it turns out that each negro costs White taxpayers about $10,000 a year. And that figure does not consider costs such as property damage, insurance, commuting costs associated with living in a negro-free area and general decline in quality of life.

Imagine if each negro were replaced by a White with Down’s Syndrome. The crime rate would be cut in half overnight. And the change would be permanent within a generation.

Most Whites DID “make great achievements without black slaves.”

“Without Blacks as slaves, mostly used as cheap farm labor, Whites would have plowed and hoed their own fields and picked their own cotton. “

What do you mean, “would have”? They did!

Only 2% of people in the South owned slaves.

The rest did their own work, and did it well.

Look at the ease in which blacks in the US have been weaponized along racial lines by the thousands of jew 501c organizations, control of media, publishing companies, entertainment and education systems. It’s all a smoke screen to hide the jew takeover of America.

African, Irish, French, etc. are not races. Caucasoid, Mongoloid, Negroid, Australoid are races. There are a number of distinct phenotypes within the races (e.g., French, Celt, German, etc.). Then there are hybrid races like the jews, Arabs, Hispanics, etc.

Far more wealth was acquired in the industrial age that during the decades of slavery. The negroes have been dead weight since the advent of mechanised farming. It is contrary to their nature to willingly be productive. 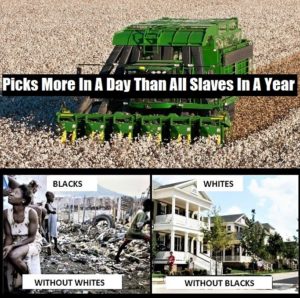 Joe, Can you elaborate on the “hybrid” races? What groups are they from, typically?

There are quite a few, the jews have different names for those jews mixed with Asian, Arab, European etc. Hispanics are a mix of the indigenous race of the Americans (which are Asiatic), and European (usually Spanish) and/or negroid. For more details I suggest:
Blood of the Isles – https://ulozto.net/file/4B1qNXQmjoCj/blood-of-the-isles-pdf

The Genetic Ancestry of African Americans, Latinos, and European Americans across the United States – https://ulozto.net/file/OCLEqyPzJRRj/the-genetic-ancestry-of-african-americans-latinos-and-european-americans-across-the-united-states-pdf

The first is a book by geneticist Bryan Sykes who’s company I used for my own genetic genealogy many years ago. The second is an academic paper. I uploaded both myself.

Mexicans and Filipinos are hybrids, to name a few.
﻿

Tell that to the white christians who have been bringing them to America for almost 500 years now! Lazy bastards should have picked their own cotton! >.>

If the weather was better. Maybe they could have picked it themselves except at night

99 percent of the people in the North before the Civil War were opposed to slavery because they were opposed to blacks being injected into what was intended to be a republic for white farmers and tradesmen. They did not want blacks living among them — as slaves or freemen — PERIOD! Between the collapse of the Whig Party and the rise of the Republican Party there existed The American Party and The Free Soil Party. Both were strongly anti-Negro. You can see evidence of this anti-black hostility in a couple of honest Hollywood movies: “Gangs of New York” and “Lincoln.” By today’s standards these whites would be considered blatant racists. Most of these Northerners were folded into the early Republican Party. They fought the Civil War to rid the… Read more »

According to Mike Collins and his guests on WFAE Radio in Charlotte, black people built the United States. The emboldened Black Lives Matter movement and similar black power organizations all put forth the most incredible claims about black achievements and accomplishments — which would have all been much greater they claim were it not for centuries of systemic white racism. The disturbing thing is most young white people believe this nonsense.

The only reason we have pandered to blacks for so long is because we had the excess wealth to do so. That wealth is evaporating quickly. Blacks will not be tolerated in the world that is coming because we will no longer be able to afford them anymore.