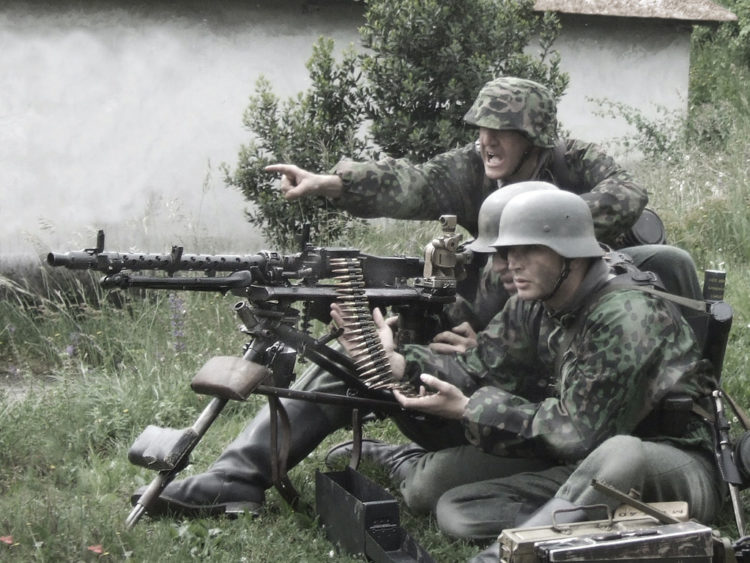 One of the last Waffen-SS units to hold out defending Adolf Hitler’s bunker in Berlin was comprised entirely of Frenchmen.

THE 33rd Waffen Grenadier Division of the SS Charlemagne (1st French) and Charlemagne Regiment are collective names used for units of French volunteers in the Wehrmacht and later Waffen-SS during World War II.

From estimates of 7,400 to 11,000 at its peak in 1944, the strength of the division fell to just sixty men in May 1945. They were one of the last German units to see action in a pitched battle during World War II, where they held central Berlin and the Führerbunker against the onslaught of Soviet infantry and armor. Knowing that they would not survive should Germany be defeated, they were among the last to surrender in the brutal house-to-house and street-to-street fighting during the final days of the Battle in Berlin.

In September 1944, a new unit, the Waffen-Grenadier-Brigade der SS “Charlemagne” (französische Nr.1), also known as the Französische Brigade der SS was formed out of the remnants of the LVF and French Sturmbrigade, both of which were disbanded.

Joining them were French collaborators fleeing the Allied advance in the west, as well as Frenchmen from the German Navy, the National Socialist Motor Corps (NSKK), the Organisation Todt, a construction unit and the Vichy French Milice. Some sources claim that the unit also included volunteers from some French colonies and Switzerland. SS-Brigadeführer Gustav Krukenberg took actual command with Puaud (now an SS-Oberführer), as nominal French commander.

In early April 1945, Krukenberg now commanded only about 700 men organized into a single infantry regiment with two battalions (Battalions 57 and 58) and one heavy support battalion without equipment. He released about 400 men to serve in a construction battalion; the remainder, numbering about 350, had chosen to go to Berlin and conduct a delaying action against the approaching Soviet Army.

On 23 April the Reich Chancellery in Berlin ordered Krukenberg to proceed to the capital with his men, who were reorganized as Sturmbataillon (“assault battalion”) “Charlemagne”. Between 320 and 330 French troops arrived in Berlin on 24 April after a long detour to avoid Soviet advance columns. (The French SS men had been attempting to cross the Falkenrehde canal bridge which was blown up under them by men of the Volkssturm who thought they were a Soviet column). Sturmbataillon “Charlemagne” was attached to the 11th SS Volunteer Panzergrenadier Division “Nordland”.

The arrival of the French SS men bolstered the Nordland Division whose “Norge” and “Danmark” Panzergrenadier regiments had been decimated in the fighting. Both equaled roughly a battalion. SS-Brigadeführer Krukenberg was appointed the commander of (Berlin) Defence Sector C on 25 April. This command included the Nordland Division, following the dismissal of its previous commander, SS-Brigadeführer Joachim Ziegler on the same day.

The soldiers noted that the first night in Berlin was unnaturally quiet. They heard people dancing and laughing, but no sounds of fighting were audible except for the occasional distant sound of Soviet artillery.They walked from West to East Berlin, to a brewery near the Hermannplatz. Here the fighting began, with Hitler Youth firing Panzerfausts at Soviet tanks belonging to advance guards near the Tempelhof Aerodrome. Soon some members of the Sturmbataillon joined the Hitler Youth in tank hunting sorties.

Supported by Tiger II tanks and the 11th SS Panzer-Battalion “Hermann von Salza”, the Sturmbataillon took part in a counterattack on the morning of 26 April in Neukölln, a district in southeastern Berlin near the Sonnenallee. The counterattack ran into an ambush by Soviet troops using a captured German Panther tank. The regiment lost half of the available troops in Neukölln on the first day. It later defended Neukölln’s Town Hall.

Given that Neukölln was heavily penetrated by Soviet combat groups, Krukenberg prepared fallback positions for Sector C defenders around Hermannplatz. He moved his headquarters into the opera house. As the Nordland Division withdrew towards Hermannplatz the French SS and one-hundred Hitler Youth attached to their group destroyed 14 Soviet tanks with panzerfausts; one machine gun position by the Halensee bridge managed to hold up any Soviet advance in that area for 48 hours.

The Soviet advance into Berlin followed a pattern of massive shelling followed by assaults using battle groups of about 80 men in each, with tank escorts and close artillery support. On 27 April, after a spirited but futile defence, the remnants of Nordland were pushed back into the central government district (Zitadelle sector) in Defence sector Z.

There, Krukenberg’s Nordland headquarters was a carriage in the Stadtmitte U-Bahn station. Fighting was very heavy and by 28 April, approximately 108 Soviet tanks had been destroyed in the southeast of Berlin within the S-Bahn. Sixty-two of those were destroyed by the efforts of the Charlemagne Sturmbataillon alone, which was now under the command of SS-Hauptsturmführer Henri Joseph Fenet. Fenet and his battalion were given the area of Neukölln, Belle Alliance Platz, Wilhelmstrasse and the Friedrichstrasse to defend.

Fenet, who was now wounded in the foot, remained with his battalion as they withdrew to the vicinity of the Reich Aviation Ministry in the central government district under the command of SS-Brigadeführer Wilhelm Mohnke. For the success of the battalion during the Battle in Berlin, Mohnke awarded the Knight’s Cross of the Iron Cross to Fenet on 29 April 1945.

On 28 April, the Red Army started a full-scale offensive into the central sector. Fighting was intense, the Sturmbataillon Charlemagne was in the center of the battle zone around the Reich Chancellery. SS-Unterscharführer Eugene Vaulot, who had destroyed two tanks in Neukölln, used his Panzerfausts to claim six more near the Führerbunker. He was awarded the Knight’s Cross of the Iron Cross by Krukenberg during a candlelight ceremony on the Stadtmitte U-Bahn station platform on 29 April. Vaulot did not survive the battle being killed three days later.

The French Charlemagne SS were the last defenders of Hitler’s Führerbunker, remaining there until 2 May to prevent the Soviets from capturing it on May Day.

Reduced to approximately thirty able men, most members of the Sturmbataillon had been captured or escaped Berlin on their own, or in small groups. Most of those who made it to France were denounced and sent to Allied prisons and camps. For example, Fenet was sentenced to 20 years of forced labour, but was released from prison in 1959. Others were shot upon capture by the French authorities. General Philip Leclerc, the French divisional commander who had served under the Americans, was presented with a defiant group of 11-12 captured Charlemagne Division men. The Free French General immediately asked them why they wore a German uniform, to which one of them replied by asking the General why he wore an American one (the Free French wore modified US army uniforms). The group of French Waffen-SS men was later executed by the “victorious allies” without any form of military tribunal procedure.

Protecting Israel is Their Full-Time Job

Quote: “The group of French Waffen-SS men was later executed by the “victorious allies” without any form of military tribunal procedure.”

Traitors (from any country) are still traitors. The French had every moral right to execute them. The same applies to every white American who betrays their fellow whites – so expect no mercy at the end of the second US civil war, when pro-white forces are victorious. The Day of the Rope will be righteous.

Every moral right? Surely not. The French who joined the SS did so because they valued their Race above the ridiculous notion that they should still remain loyal to their corrupted governments. It’s wholly impossible to be traitors to a corrupted government, as it is the government that betrayed you first, thereby terminating any rightful claim they had to their positions henceforth. How do I mean? The partnership, the contract, the understanding, that the government has with its citizens is that the government is acting on behalf of the citizens in order to benefit them. The citizens don’t have the time during their day to do everything a nation needs, so the citizens create government to govern for them and on their behalf and in their best interests at all… Read more »

That was beautifully argued and nobly thought through.Admirable-Certainly, Race before Nation,because chauvinism is the invariable inverse of Liberalism.

A patriotarded remark, I’m afraid. Unless you think National-Sozialismus and Fascismus treacherous to European loyalism when both ideas are thoroughly European and the Anglosphere and even the Russosphere, now, are 100 Europhobe.

Lindbergh, Pierce and Rockwell et al are the greatest Americans of the last century just precisely because they thought race before nation and they are those this excellent site lauds.

A very interesting & little-discussed (to my knowledge) historical tidbit. The existence of Waffen-SS units comprised of multiple European nations & ethnicities is no secret, but good luck getting factual & unbiased data from academia today. Let’s hope that trend reverses somehow.

It is important to note that the nazis were not just pure germanic but for the welfare and security of all the aryan nations of europe. A simple internet search of reich members quickly shows numerous slavs and 9ther eastern europids, two italians spanish greeks etc. Not to forget their huge respect for the shah of iran so much that in 1936 they made iranians immune to the nuremberg laws and built much infastructure e.g. buildings damns bridges roads trade etc. Not to forget scientific libraries. Hitler and the nazis at least the ones in yhe policy making positions were pan arianist in the hollistic sense. They were flying the flag for all white atyan folks not just germans. Their political behaviour certainly proves this.