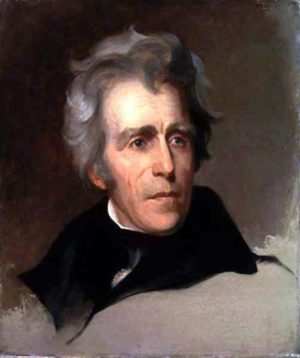 SELECT FACES of the Founding Fathers and former Presidents of the United States decorate our nation’s currency. The selection process is fairly basic: do something great, something worth celebrating, something worth remembering for America.

Andrew Jackson (pictured), the son of Irish immigrants, was born into poverty. In 1787, at the age of 20, he earned admission to the North Carolina bar and later moved to Tennessee where he practiced law.

Jackson went on to serve as a major general in the War of 1812 and commanded U.S. forces in a five-month campaign against the Creek Indians, who were allies of the British. In January 1815, he led American forces to victory over the British in the Battle of New Orleans.

In 1817, he was recognized by all as a national war hero. And as acting commander of the Army’s southern district, he led a force into Florida, captured Spanish posts at St. Mark’s and Pensacola, claiming the surrounding land for the United States and driving the Spanish from Florida. It would later become a state in 1845.

In 1828, Andrew Jackson became the 7th President of the United States. Jackson was a defender of states’ rights and of the people against moneyed interests. It is interesting and ironic, considering the controversy about Jackson’s replacement on the $20 bill, that one of the most important aspects of his presidency was his opposition to the central bank. In fact, he was quoted saying that such banking constituted the “prostration of our Government to the advancement of the few at the expense of the many.” He saw the bank as a “privileged institution and an enemy of the common people.”

Andrew Jackson was a ferocious man. He fought 103 duels of honor before he became President. At the age of 67, Jackson became the first President targeted for assassination. The gun misfired, and Jackson attacked his assailant, clubbing him with his cane.

Rising from humble beginnings through hard work and strength of character to become a war hero and a two-term president of the United States makes Andrew Jackson’s life worth commemorating with statues and other memorials, place names, and his face on the $20 note.

This nation was founded by, built by, and fought for by white men. Former president Andrew Johnson once said that “this is a country for white men, and by God, as long as I am President it shall be a government for white men.” This sentiment was commonplace among our Founding Stock. The United States was never meant to be a multicultural nation. It was intended to be an extension of Europe.

As soon as Jews arrived in America they began to politically organize, and acted as our competitor right from the start. Jews manipulated the American system for their own benefit. A nation whose list of war heroes was extensive, whose battle for independence had already been won, whose laws and government had already been established, America was a nation alive and well until the arrival of an ethnic group with competing interests.

Since becoming a force in American politics, the Jewish elite has worked tirelessly to subvert European American values and culture, while simultaneously remaining the most privileged and powerful minority group in the United States. For instance, while Jews only represent roughly 2% of the American population, they also represent 48% of the billionaire class. The Federal Reserve, the centralized bank which prints the lovely portraits of past presidents on our currency, also happens to have had three consecutive Jewish chairmen: Alan Greenspan, Ben Bernanke, and most recently, Janet Yellen. Then we have Jack Lew, the Treasury Secretary who is responsible for Harriet Tubman’s replacement of Andrew Jackson on the $20 bill; he also happens to be Jewish.

With all of this privilege, what can be said about the heroism of Jews in American history? How many Jewish war heroes are there compared to Europeans? How many Jewish statesmen dedicated their lives to the betterment of European America, as opposed to transforming it into a multicultural hell? What, exactly, have Jews done to earn their present-day power and privilege? Is there a single one of them that measures up to Andrew Jackson?

Unfortunately, Jews have dedicated their intellect and energy to tearing down rather than building up America. They pushed the redefinition of America from a European nation to a multicultural proposition nation. They pushed the 1965 immigration act which opened America to race replacement immigration from the Third World. Jews have promoted racial integration, affirmative action, and massive transfers of both wealth and status from whites to non-whites, especially blacks. Thus America is no longer a white nation defined and populated by descendants of war heroes and frontiersmen.

Similar policies have been adopted in all European nations since the Second World War. European people are being systematically replaced in our homelands. Our history is presented as uniquely evil, a karmic disaster. Our political and social interests are seen as hateful and exclusionary. This did not happen by accident. It was perpetrated by our ethnic competitor. Western Civilization is being murdered, eaten alive by parasites.

Left to their own devices, blacks are usually politically inert and ineffectual. Many are inclined toward black separatism and nationalism, which suits us fine. Blacks have been turned into a tool of anti-white ethnic vilification and displacement by Jews. The replacement of Andrew Jackson by Harriet Tubman is just one small skirmish in a much larger battle.

There are no portraits of Jews on United States currency, just symbols for the manipulation of their host populations, which they hold in contempt. Jews prefer having the substance of power rather than the symbols.

Andrew Jackson fought against the central bank. He lived his entire life putting honor and principle above money. So I doubt that he would be particularly honored by appearing on a Federal Reserve note. But we should still be angry about Jackson’s replacement, which symbolizes the loss of our nation. The fact that Harriet Tubman can take his place without protest symbolizes the death of our heroic spirit — the apathy that has replaced our will to power. If Jackson’s ferocious commitment to honor lived on in our hearts rather than died in our pockets, none of this would have happened.

Fine article – great sentiments. Let us never forget the immortal words of Dr. William Luther Pierce – “the jews are our misfortune.” I finished reading, for the second time, the book by Maurice Samuel entitled; ‘You gentiles.’ Even though it reads like a letter from an inmate of an insane asylum it does offer some wisdom of sorts. I must agree with Samuel on his concept of seriousness. In chapter II, sports, he outlines the Aryan concept of doing the right thing – living by a code of ethics and abiding by the Marquess of Queensberry rules in our approach to the world and to each other. This code only works in a white-world, and at the moment we do not have a white-world. We must now operate by… Read more »

You can just imagine that the idea behind replacing Jackson instead of another was due to Jackson’s diehard resistance to central (read: jew) banking. And Trump won’t do anything to stop that outrageous blasphemy of replacing Jackson on the $20 bill.