EDITOR’S NOTE: Jews are a mixed race, and some of them are instinctively repelled by what the Jewish power structure is doing. The process of such people falling away from their Jewish identity, however, tends to concentrate the Jewish mentality ever stronger in the Jewish gene pool that remains.

FOR OVER ten years now Henry Herskovitz and Jewish Witnesses for Peace and Friends have been standing vigil outside Beth Israel Temple, Ann Arbor, Michigan. You can see what I think of them here.

This is their latest report:

Three members of JWPF gathered around a small table this week to discuss The Great Holocaust Trial by Michael Hoffman. Mr. Hoffman was a reporter at the “false news” trial of community activist Ernst Zündel in Toronto in 1985 and also at the 1988 re-trial. Though Ernst was handed guilty verdicts on both occasions, they were overturned by the Canadian Supreme Court in 1992, when they declared the country’s “false news” law unconstitutional.

Instructive in understanding revisionist history is the following exchange, reported by Mr. Hoffman, between Zündel defense attorney Doug Christie and Raul Hilberg, certified by the Court as an expert witness, and lauded by the Canadian Jewish News as “one of the world’s foremost authorities on the Holocaust”. This exchange was also reported in The Sault Star on January 18, 1985 under the headline “Scientific evidence of Holocaust missing.”

Christie: “Can you give me one scientific report that shows the existence of gas chambers anywhere in Nazi-occupied territory?”

Christie: “You are (at a loss) because you can’t.”

When asked by the Crown to testify three years later at Ernst’s retrial (1988), Hilberg declined, writing, “I have grave doubts about testifying in the Zündel case again… Were I to be in the witness box for a second time, the defense would be asking not merely the relevant and irrelevant questions put to me during the first trial, but it would also make every attempt to entrap me by pointing to any seeming contradiction, however trivial the subject might be, between my earlier testimony and an answer I might give in 1988. The time and energy required to ward off such an assault would be great …”

Hoffman: “Neither did a single ‘Survivor’ take the stand in the second trial. They too feared what would happen to the credibility of their tales when subjected to critical scrutiny by Zündel’s defense team”. [p. 95]

To the three JWPF’ers in the discussion, Hilberg’s revelation comes with breathtaking implications. Has the world indeed been duped into believing that the National Socialist government of Germany were the all-time perpetrators of ultimate evil in the world, or has the fabric of the standard Holocaust narrative been ripped substantially by Hilberg’s admission, now thirty years old? If claims about homicidal gas chambers are false, doesn’t that challenge the heart of Zionist defenses protecting the state of Israel? Is going after the Holocaust a worthwhile endeavor for the goal of liberating Palestine?

Paul Eisen thinks it is. In “Holocaust Wars” he quotes revisionist Robert Faurisson:

Zionists truly fear the weapons of the poor (children’s stones, their slingshots like that of David against the giant Goliath, the suicide attacks) and all that may endanger persons and business; they fear a demeaning of their brand image. But they are above all apprehensive of “the poor man’s atomic bomb”, that is, the disintegration, by historical revisionism, of the lie of the gas chambers, the genocide and the six million; they dread this weapon that kills no one but that would not fail, if properly used to explode their big lie like a bag of hot air… to lose the “Holocaust” is to lose the sword and the shield of Israel as well as a formidable instrument of political and financial blackmail.

This writer remembers visiting Ernst in Mannheim Prison with friend and associate Dan McGowan in December of 2006. Readers can view Dan’s report, A Visit with Ernst Zuendel in Prison, published on Dissident Voice shortly after our return. I share with Dan the warm feelings felt at the end of our hour visit: Ernst Zündel, the reputed anti-Semitic devil, did not merely shake hands with me; he held mine in his. Eight years later the memory remains strong. 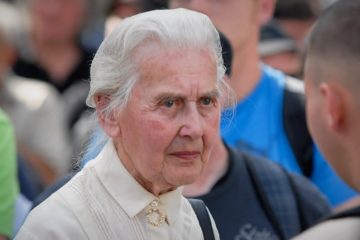