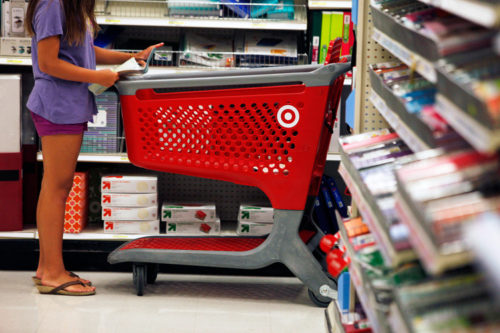 Actually, even the word “gender” (which properly refers only to language) being used in place of the more appropriate word “sex” was itself an early symptom of the anti-sexual insanity now being forced on us by Jews intent on disrupting our normal reproductive behavior.

TARGET CORP. is removing gender labels from most of its children’s departments after customers complained about signs designating certain toys for girls. (ILLUSTRATION: A girl looks for school supplies inside a Target store in Torrance, Calif., on August 20, 2013.)

The kids’ bedding section will no longer feature boy and girl signage, and the toy department will be without labels and pink or blue paper on the shelves, Minneapolis-based Target said on its website Friday. Gender labels will remain in the kids’ clothing section because of sizing and fit differences.

Retailers have been moving away from gender stereotypes, and some startups have emerged to break down the divide in kids’ clothing and toys. The signage that sparked the dispute at Target was for building sets, like GoldieBlox, that are targeted at girls.

“As guests have pointed out, in some departments like toys, home or entertainment, suggesting products by gender is unnecessary,” Target said. “We heard you, and we agree. Right now, our teams are working across the store to identify areas where we can phase out gender-based signage to help strike a better balance.”

In June, Ohio mom Abi Bechtel called out Target’s gender designations in its toy aisle. She posted a photo to Twitter that showed store signs for “Girls’ Building Sets” next to regular “Building Sets.” The outcry was swift, with angry shoppers calling for change.

“It stood out to me as a good example of the way our culture tends to view boys and men as the default, normal option and girls and women as the specialized option,” Bechtel told CNN at the time.

Lesbian Beats Son to Death for Refusing to Dress Like a Girl
The New Boy Scouts: Major Membership Decline
Partake: The Ever-Flowing Springs of Strength
A "Maga" Jew Is Still a Jew: Florida's Joel Greenberg Goes Down
Two Great Books for Middle School Students
Migrant Crisis: 43% of All Rapes in Sweden Are of Children
As a Result of the Punching
Black Soldier Charged With Deliberate Murder of White Toddler
Tags:ChildrenGenderGender FluidityTarget

The sculptor of the Lucille Ball statue chose ‘it’.

It’s amazing that a store would change its business practices to cater to a few overwrought feminists. I highly doubt Target pulls that crap in my 77 county red state, but I could be wrong. Part of getting a business degree is learning how to market and knowing your public’s impulses and desires.