THERE ARE ONLY two historical events you need to know about: muh slavery and the precious six million lost to homicidal gas chambers. It would probably be best if you didn’t learn too much about even these approved scraps of the past. We don’t want you finding out about the Jewish slave ships or the seemingly endless ridiculous inanities from the holohoax, after all. We should probably focus on the endless present where the merchant rules over you, with no past and no future. A little Jew with a giant eraser is the hero of our time, the beady-eyed creature eliminating upsetting truths and steadily deleting the existence of White America. We have always been a “multi-culti” globalist bodega. Whites were bad to the “African-American” and g*d’s chosen and deserve the coming genocide. This is all you need to know, slave. Where’s your face diaper? Where’s your vaccination card? Why are you still alive?

The University of Rhode Island recently announced plans to remove two murals depicting the events of World War II due to their lack of diversity.

Thank the desert idol we defeated Hitler and aren’t speaking German right now. Imagine being forced to live in an authoritarian society that controls what you’re allowed to say and think. You probably can’t, because you live in a healthy Democracy.

The decision was prompted after students complained that the mural was not compatible with the university’s values of inclusivity. According to the school’s Vice President of Student Affairs, “Some of our students have even shared with us they didn’t feel comfortable sitting in that space.”

They died for nothing. Every trace of their memory will be removed, the children they didn’t have replaced with brown idiots who carry a deep hatred for everything they once represented on blood-stained beaches and desolate forests in the midst of a bitter winter. You may have died in a horrific brother war in the service of Jewish communism, but even the thought of your existence is hateful to the dangerous inferiors steadily colonizing the sad remains of the America you loved enough to die for it. Your selfless heroism and misdirected courage is not compatible with the spiritual cancer. I wonder if you “felt comfortable” huddled in the snow, trying to kill your own family for the benefit of the merchant. It doesn’t matter.

According to a local news report, the University of Rhode Island plans to remove two 70-year-old murals that depict World War II over concerns that they do not feature enough diversity.

Once we have the “diversity” of ugly simian faces on everything I’d be absolutely shocked if we don’t start seeing discernible improvements in a race so pathetic we’ve decided that judging the appalling content of their character is “racist.”

The murals were painted to pay respect to the memories of those that lost their lives in World War II. The murals feature various scenes including veterans returning to the United States and a University of Rhode Island class reunion.

Die for the Jew, White man. Don’t worry, your memory will keep marching on, long after we’ve flooded your homeland with foreign looters. You fought and died for global finance; we’ll always remember. At least until some 70 I.Q. groid “about to go to college” gets agitated at “dem fuggin pink mudda fuddas inn dat pick-turr” and then you’re going on the trash heap. What a bargain for you, goyim.

Kathy Collins, the University of Rhode Island’s Vice President of Student Affairs, said that she has received numerous complaints from students about the murals’ lack of diversity.

I’m sure we’ll be treated well when we become a hated minority in our own country. We’re not heading toward Zimbabwe or an American Holodomor, no sir.

“I have received complaints about the murals that portray a very homogeneous population predominately the persons painted and depicted on the wall are predominantly white and that does not represent who our institution is today,” Collins said.

This is bad homogeneity, unlike our tar black Liberia Ball team, our special student organizations for every dark failed race or our great ally Israel.

The murals were painted by Art Sherman, who is now a 95-year-old veteran and a member of the University of Rhode Island’s class of 1950. “Oh, I loved painting that, yeah,” Sherman told a reporter this week. “I never had any formal education in painting by the way I just used to cartoon.”

Yes sir, I’m sure proud I fought against Mr. Hitler. I’m leaving behind a very strong America thanks to all those sacrifices my generation made for the cause of kosher evil. I don’t have a lot of the “book learning” but I’m pretty sure everyone likes my little paintings.

Back then our country was White and sane, so no one told me to draw tar monsters, Latinos and mystery meats.

This Gets You Into Eight Ivy League Schools: "I'm Black and I Love Music" 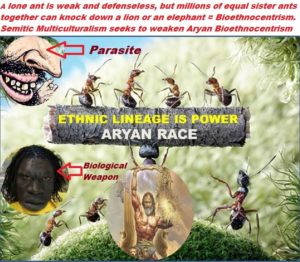 “Whites were bad to the ‘African-American’…” The thing that gets me about that term is if Americans of African descent are so proud of being Africans that they would refer to themselves as Africans first and Americans second, then why don’t they MOVE. TO. AFRICA?! It’s a win-win-win. They can get away from “evil whitey” while simultaneously living on the continent that they purportedly love (despite most of them never having traveled beyond the local chicken shack). And the last win is that we get to be rid of the serial whiners once and for all. It’s a rhetorical question, of course, since the answer as to why they don’t move is: “Muh, electricity” and “Muh, running water”. Two things most African countries don’t have. Ya’ know, because they’re run… Read more »

On another note, is anyone in management aware that, for the last 10-14 days I’d guess, the main article section on the homepage has appeared blank? I’m speaking of the area above “More articles”. The area to its right (I think it’s usually “Latest Articles” or something like that) is the same way. It’s just a blank white spot. I know it’s not an issue with my computer because it’s doing it on both my pc and my laptop. Although it could be a Firefox issue. Either way, just thought I’d bring it to someone’s attention.

Not only does the Zionist Camp kill donkeys when they’re off the millstone, to use a Chinese idiom (卸磨殺驢 / xièmòshālǘ), but also stigmatize and even outlaw respect for the donkeys.

So that our history, even this modest mural, never disappears from memory, a library is being built at the National Alliance’s national office in Tennessee.

But help is needed to complete it, and NV readers can chip in with donations directed to the National Alliance, PO Box 4, Mountain City TN 37683

What does it, is flattery. Once a person succumbs to flattery they are entirely in the hands of the flatterer. And if the flatterer needs people to do anything morally wrong, he tells the people that you gotta do what you gotta do to gain the desired end. And that is where we are today after defeating “Slavery” in the Civil War, “The Hun” in WWI, “Mad Man Hitler” in WWII, “Communism” in the Korean War, “Communism” again in the Vietnam War. Wow that Communism thing keeps popping up, that’s good one. And now having finally defeated the Communists, we are the new enemy. The thing about kings and monarchies, the people were needed to do the work. Now with bankers in control, the people are no longer necessary, they… Read more »

Can’t side with the marxists in a world war and expect to remain unaffected :D

Should be corrected to read: “A little Jew with a giant eraser is the hero (they aren’t; they just think they are) of our time, the beady-eyed creature eliminating upsetting truths and steadily deleting the existence of White America. We have always been a “multi-culti” globalist bodega. Whites were bad to the “African-American” (That’s why they still come here by the boatload) and g*d’s chosen and deserve the coming genocide. This is all you need to know, slave. Where’s your face diaper? Where’s your vaccination card (it’s on its way) ? Why are you still alive (don’t worry-we’ll take care of that little problem)? Thank the desert idol we defeated Hitler (were not) and aren’t speaking German right now. Imagine being forced to live in an authoritarian society (We are)… Read more »

Hats off to Modern heretic for
spelling the “holocaust” with a lower-
case “H!” That is a great start!

It is important to keep records of the lies told during the past. For example, regarding the evil narzies crushing churches, Hitler never closed a church, it was the judeo-communists that destroyed churches and murdered thousands of christian priests.