THE now-outlawed symbol. It must have been something in the air. . . .

Used by the forces that created a closed, militarized police state and murdered 60 million Whites during the last century. Their direct spiritual, ideological, and genetic descendants rule the world with an iron fist, continuing their evil, destructive work.

In Russia, New Law Permits Only “Negative” Use of National Socialist Symbols
Immortal Symbols
It Could Happen to Anyone
UK: Illusionists Fail Again
Yet Another Swastika at George Washington University
Jew Businessman Paid for Swastika Graffiti in Ukraine Before Russia Invaded
Homeless Jack on the Sacred Swastika
The Forest Swastikas: They Keep Coming Back, Again and Again and Again
Tags:Swastika

A National Socialist Perspective on Capitalism and Class 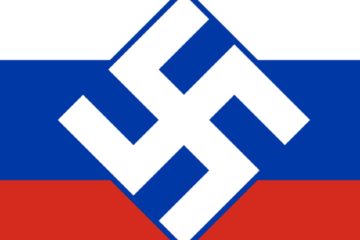 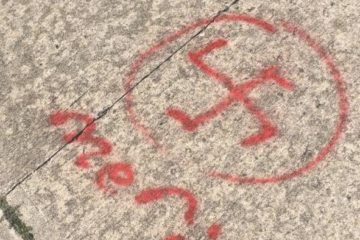 On Top of This Case

According to Hitler, the swastika was “the symbol of the German worker”.

[Volume II, Chapter 7 (“The Struggle with the Red Front”), page 497 in the Houghton Mifflin edition, page 557 in the German original.]

“Our nationalist and socialist programme was made manifest in our flag.
The red expressed the social thought underlying the Movement, white the national thought, and the swastika signified the mission allotted to us—the struggle for the victory of Aryan mankind and at the same time the triumph of
the ideal of creative work which in itself is, and always will be, anti-Semitic.”
Mein Kampf, Stalag Edition, page 561

Michael Walsh’s ‘The Triumph of Reason’ contains the following quote:

We have both the hope and the faith that the day will come on which Germany shall stretch from Konigsberg to Strasburg, and from Hamburg to Vienna. We have faith that one day Heaven will bring the Germans back into the Reich over which there shall be no Soviet star, no Jewish star of David, but above that Reich there shall be the symbol of German labour – the Swastika. And that will mean that the 1st May has truly come.” – 1st May 1923. Hitler’s Speeches, Baynes. Royal Institute of International Affairs, 1942

Adolf Hitler’s Armed Forces: A Triumph for Diversity? Veronica Clark https://inconvenienthistory.com/1/3/3102 https://www.e-reading.club/bookreader.php/1062359/King_-_The_Bad_War__The_Truth_NEVER_Taught_About_World_War_II.html This book http://archive.is/PIIpv is a sword of fire, which in the darkness of lies now illuminates the path of each of the people. “The earth has not yet borne such a people that it would be so impure and was so filthy on the inside, so vile and repugnantly depraved.” And here the Jews are “ahead” of all. https://archive.is/PIIpv#selection-4035.0-4035.165 The Semites “- according to Helena Petrovna Blavatsky in ISIS WITHOUT VEH -” the less spiritual race – have never been able to elaborate a language through which one can formulate high moral and intellectual ideals ” https://nationalvanguard.org/2016/01/holocaust-house-of-cards/ With regard to the HOLOCAUST, it is urgent to highlight them – the real ones – the Germans and Japanese and… Read more »

If the above address http://tomatobubble.com/worldwarii.html is inaccessible, simply enter the text referring to it and find it in the search link. National Socialists were opposed to this – how international bankers, through their privately owned central banks (ie Federal Reserve, Bank of Canada, Bank of England, Bank of Germany) and corrupt governments are issuing interest based (i.e. debt based) money that is robbing the people of nations blind. https://justice4germans.wordpress.com/2012/10/12/a-discussion-of-fascism-and-national-socialism-vs-anarchy-and-communism/ National Socialist Jews: Hitler’s Forgotten Soldiers https://sites.google.com/site/207lgcu/nazis Ending Class Warfare – The Jewish-Marxist tactic of class hatred and class struggle, which had been used to divide the Jews’ Gentile hosts against themselves, was forced to give way to a new spirit of class cooperation for promoting the common interest. https://nationalvanguard.org/2018/01/who-we-are-a-series-of-articles-on-the-history-of-the-white-race-part-25/ The slanderous allied propaganda against Hitler’s Germany follows the motto of… Read more »

“Those who can make you believe in nonsense will also convince you to commit atrocities.” Voltaire, Questions about the Miracles, 1765 http://www.nazigassings.com/

Germany is under perpetual occupation. Constantly in the presence of the enemy. In southern talk, the invaders are ‘there yet’.

The 19th century Prussians were so enamored with consolidation that after helping the Federals accomplish it over here, they went home and consolidated the happy, lose German states and everything went down. The government the Prussians fought for on the Potomac destroyed Germany twice in the following century.

Why did German Americans wage war on their European kin? Why did the Jews follow the Germans to the Midwest?

German-Americans were tricked into WW2, believing that they were saving Germany from evil Hitler – all lies. The all-lies deliberately carpet-bombed German civilians.

Unlike other European countries the German states in the 1820s gave Jews the same rights of citizenship as ethnic Germans. Germany was their favourite country.

The Jews supported Germany during WW1 until their Balfour betrayal in 1916. According to Benjamin Freedman they changed sides like turning on a light switch. They instantly became anti-German in order to have America enter the war (after the Kaiser had offered the best ever peace treaty) to defeat Germany and then have Britain give them Palestine.

When the outnumbered Germans were defeated, the 240 Jewish attendees (300 total attendees) at Versailles forced the worst ever treaties on the Germans who were tricked into surrendering because they expected an honourable peace.

One I Missed A contemporary swastika I missed when I wrote this article was Finland’s Air Force “unit emblem” used on uniforms, unit flags, and decorations until 2017. A blue swastika against a circular white field previously adorned all planes in Finland’s Air Force from its founding in 1918 until the defeat of the Axis in 1945, at which time it was eliminated. For more information see: https://www.bbc.com/news/world-europe-53249645 (contains photos). However, the small swastika emblem continued in use within the air service until being quietly dropped in 2017. As part of the program of genocide the global media are currently featuring this story. Swedish explorer and ethnographer Count Erich von Rosen (https://en.wikipedia.org/wiki/Eric_von_Rosen) used the swastika as his personal symbol. He had it emblazoned on an airplane he gave to Finland… Read more »