Do Not Interfere With Non-Whites 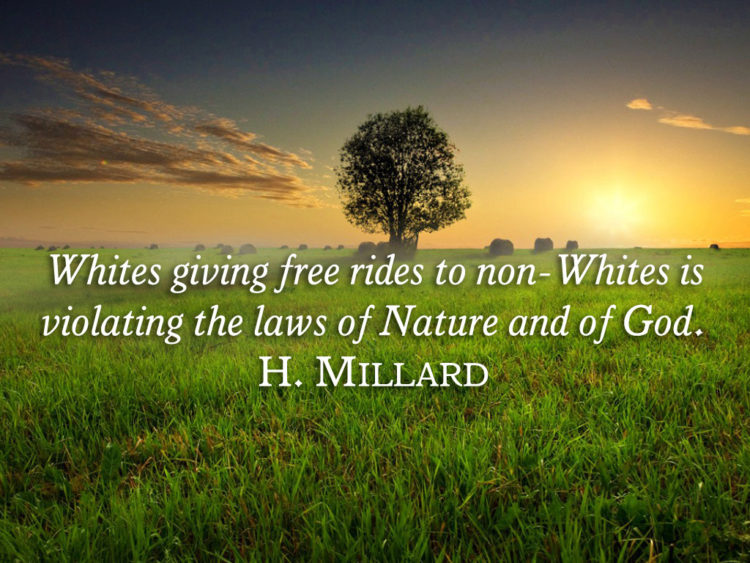 True morality commands us: Do not interfere in the business or fates of non-White peoples.

WE ARE TOLD that about 20 million non-Whites, mostly Blacks, face starvation in Nigeria, Somalia, South Sudan, and Yemen.

And, while the physical extermination of White individuals and White family lines goes on, White cities and nations will be made into filthy, dangerous places of torture, disease, and death for any Whites who remain there. Doubt it? Look around you at formerly great White cities that are now majority Black. President George H.W. Bush lived in then-White Compton, California, back in the 1940s. Today, it is a non-White hellhole. And, that’s just one of many examples of what happens when Whites are forced out of an area and the area goes non-White.

And it is worth mentioning that Jeb Bush has now turned his part of the Bush family line from White to Brown — which is one of the effects we see when the number of non-Whites increases, and Whites then forget that what is absolutely essential for our survival is the White genome and instead begin to believe in the false idea that all humans are the same and thus should have no compunction about miscegenation.

Whites have to start looking out for Whites and White interests both in the short term and in the long term, and Whites must start seeing the harm their violations of Nature’s (read God’s) natural laws cause — if not today, then in the years to come.

Whites must ask of everything: Is this good for White people? And they must be able to extrapolate whatever it is they are asking that question about into the future. For example, if Whites had asked if WWII was good for White people and if they had thought through what all the millions of deaths of Whites would mean to our present-day world, they would have found a way to avoid that war, which killed off millions of Whites and left us with the present dystopian, darkening world where White genocide is a reality and where White extinction is a very real possibility.

What should be the ethical position of thinking, awakened Whites when we read of problems with non-White peoples such as the African starvation mentioned above? It should be to mind our own White business and not butt in. We should let Nature (or God, if you prefer) handle it. Natural selection works in the affairs of humans as it does with all other living organisms. Some live and some die, and this is how evolution moves forward — and hopefully upward towards ever greater consciousness. And this is how the world will be made more holy and righteous.

For too long, too many Whites have felt it is somehow “good” and “righteous” for Whites to help non-Whites survive and this is often portrayed as some sort of wonderful compassion. But, when you scratch the surface you’ll find that many of these do-good Whites are full of noblesse oblige racism and feelings of White supremacy. The present-day Whites who are bounding off to darkest Africa to help Blacks are the psychological descendants of the Whites who “helped” the American Indians, the First Nations people in Canada, and the aborigines in Australia. As you are probably aware, these Whites, in trying to do good, harmed these non-White peoples in many ways and caused many of these non-Whites to hate Whites who destroyed their cultures, religions, and ways. Over the past few years, the governments of the U.S., Canada, and Australia have all officially apologized for the butting into the business and fates of these non-Whites by Whites in these three nations.

Each distinct people must find its own way, and must survive or go extinct as it struggles for existence. There are no free rides in Nature — and Whites giving free rides to non-Whites is violating the laws of Nature and of God. This applies to Whites as it does to all other kinds. We must individually — and as the distinct people that we are — decide that we want to survive and thrive, and we must do whatever is necessary to make this so. As with all other kinds, there is no free ride for us as Whites, and Nature doesn’t care if we live or die. We ourselves, we alone, must care.

Here, once again, are three quotations containing some of the most important words that White people must remember:

“Living organisms must necessarily compete, for food, for mates and for living space, especially with other members of their own species. They must avoid predators and other dangers. For all these various reasons, some will leave more offspring than others, and it is the genetic characteristics of such preferred replicators which will be passed on preferentially to succeeding generations. This is the essence of natural selection.” — Francis Crick (Nobel laureate and co-discoverer of the structure of DNA)

“Man is something that shall be overcome. Man is a rope, tied between beast and Overman — a rope over an abyss. What is great in man is that he is a bridge and not an end.” — Friedrich Nietzsche

Saint Hitler, World War 2, and Nature's God
Whiteness Is Commanded of Us by the Creator
Homeless Jack: Breed and Eat Your Way Across the Universe
Homeless Jack: "Our True Religious Feelings and Our DNA Are Inseparable"
Evolution Is Racist
French Court Rules That “Native White French” Do Not Exist
Chinese Racialism is a Massive Force Multiplier
The Mysterious Force of "White Racism"
Tags:EvolutionH. MillardNatural lawRacismReligion

The Refugees No One Wants

I agree. This is all solid advice.

If blacks in Subsaharan Africa are going to starve – then let them! No food, money, no medicine. They’re just going to eat-eat-eat our food and pop out more babies who are more-or-less destined to grow into low IQ, shiftless adults. Keep our agricultural surplus and manufactured resoures for ourselves or OTHER WHITE PEOPLE. We, as a people, get no thanks for our generosity, and we drain our own racial vitality. Whitey’s survival MUST come first, while Blackie can learn to sink or swim on his own. Preferablyn we might as well wait for Africa’s black population to die-off on their own, they we can quietly walk back into their desolated homelands to re-colonise the continent. A more ideal South Africa, Rhodesia, Mozembique, Angola, Congo Free States and French Africa… Read more »

Do Not Interfere With Non-Whites