“WHITE PRIVILEGE” seminars are being implemented for Oregon school officials and teachers, to the tune of $100,000 taxpayer dollars, EAG News reported. (ILLUSTRATION: Kim Feicke of OCEE warns teachers who attend her seminars to “Watch out for whiteness.”)

The seminars start June 22, and are already filled, according the website of the Oregon Center for Educational Equity, which is hosting the event.

“Every year the Gresham-Barlow school district, like many others across the state, sends teachers and administrators to a week-long ‘Coaching for Educational Equity’ conference in Cottage Grove, Ore.

The annual event is based on the concept of “white privilege,” or the idea that all white people are racists, whether they realize it or not, and that racism permeates American society and the nation’s education system,” EAG reported.

Dan Chriestenson is a two-term school board member “who wants nothing more than to realize the goal of the civil right movement”, according to EAG, but he sees right through the OCEE’s agenda.

“If you tell a black kid that if you work hard you can achieve anything you set your mind to, that’s racist, because you are perpetuating a myth of meritocracy,” Chriestenson told EAG.

“They are setting black kids up for failure by telling them that whitey will never let them do it — this culture will never let them succeed. And they’re telling white kids that their best efforts will only produce undeserved rewards, because it was all handed to them.”

Chriestenson is deeply troubled by what he’s witnessing, and is sending a warning about the regressive message the “white privilege” seminars are sending.

“They are segregating students. They are spreading anger among students of color and guilt among white students.”

Chriestenson had a difficult time obtaining a copy of the manual to be distributed at the conference. The director of OCEE refused to turn over the information at first, stating it was meant to be “experienced, not read,” Chriestenson told EAG.

After much persuading to get his hands on the material, he understood why.

A summary titled “What is CFEE?” summarized the intention:

“…Many white people in Oregon have no idea that our schools and state are immersed in white culture and are uncomfortable and harmful to our students of color, while also reinforcing the dominant nature of white culture in our white students and families.”

The manual goes into a long list of “microaggressions” explaining what is acceptable to say and think, much like the newly discovered guidelines that were given out to California University staff that had recently made headlines.

It also explains in a handout that can be seen in its entirety here, that in order to play a positive role, white people must become an “Anti-racist white ally” as outlined in part: 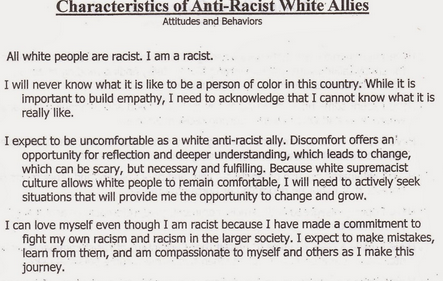 To sum up the program, all white people who wish to rid themselves of their innate hidden racism need to admit that they are a racist. Encouraging a black student to work hard for success is also racist because that concept is, according to the OCEE doctrine, foreign to the black culture.