Finding some jewelry and almost enough terra cotta tile for one small bathroom “proves the Holocaust.”

LET ME SHOW YOU how the Jews practice deception. Although they have no moral qualms against telling explicit lies, they prefer to induce others to adopt false beliefs by more subtle methods, such as telling only part of the truth in such a way that invites listeners to fill in the gaps with plausible, but incorrect, speculation.

An example is Elizabeth Svoboda’s article, “Unearthing the Atrocities of Nazi Death Camps,” which is in, but does not deserve to be in, a recent issue of Scientific American.

Despite the presumptuous and misleading title, the German internment camps weren’t “death camps.” They were places to isolate from German society people whom the Germans found dangerous. The United States did exactly the same thing during the same war by interning citizens of Japanese ancestry. The only difference is that the Germans made their internees work. For example, the labor of the interns at Auschwitz was making synthetic rubber for the German military. These camps were labor camps. They are miscalled “death camps” because that’s how the Jewish propaganda script reads.

Yes, as the article says, there were “mass graves” in the camps. What the article does not mention is (1) what really killed the people buried in them (typhus), and (2) the number of bodies buried in them. A “mass” grave can hold as few as ten people, and there is, so far as I know, no upper limit to the meaning of “mass.” A term so vague that it encompasses six orders of magnitude, or more, is without meaning unless the number implied by it is made more specific. Did you notice that the article does no such thing?

The article makes repeated and specific mention of “gas chambers.” There were no such things in the camps. The only building in which hydrogen cyanide gas was frequently introduced was one set aside for the disinfestation of clothing, carpet, bedding, and drapery. The Germans did this delousing in order to curb the spread of typhus, and the reason for most of the deaths in the camps was that the Allies bombed German railways and thus prevented the camp administrators from combating the spread of the disease.

Bricks get their reddish color from the iron they contain. When hydrogen cyanide is in prolonged contact with the iron in bricks, a chemical reaction takes place that produces a ferrocyanide chemical called Prussian Blue. When it is extensively produced, it isn’t confined to the surface of the brick, but penetrates all the way through it. The blue staining of the bricks of the delousing facility can be seen even on the outer walls.

Zyklon B was the commercial product from which the Germans produced hydrogen cyanide gas. Versions of the same product were also used by the Allies, for the same purposes: to kill insect and animal pests as a disease-prevention measure. Accordingly, the practice in the military bases on both sides of the war, Axis and Allied, was to fumigate buildings about once each year.

And so barely detectable traces of Prussian Blue have been found in the internees’ quarters, but they were also found in the guards’ barracks, in the commandant’s office, and everywhere else. The Jews call this slight contamination “criminal traces,” but it is no such thing. Any red-brick building used every day for years on end to kill millions of people with hydrocyanic gas will develop a substantial and penetrative load of bluish ferrocyanide in its walls. No building other than the delousing facility shows such levels of contamination.

Hence, there were no homicidal gas chambers in any German camp during the Second World War.

Further, there’s the ambiguous Jewish use of words such as “mass” to imply “millions” without explicitly saying “millions.” It’s sneaky. It depends on your not doing any homework yourself. In particular, you should be aware that both the report of the Red Cross and the camp’s own records, uncovered from the Soviet archives by President Gorbachev, put the death total in Auschwitz at 74,000. 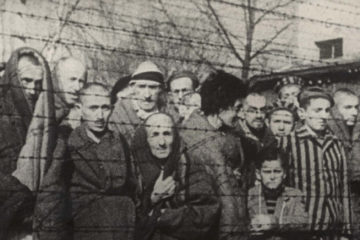 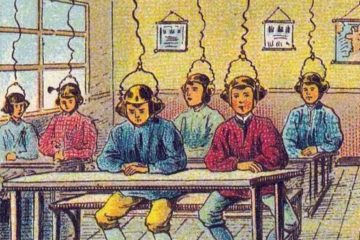 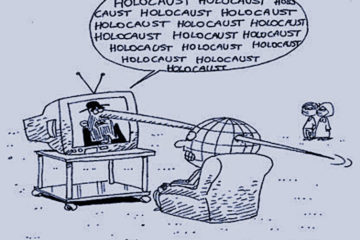 Speaking of Jewish lies, perhaps National Vanguard should publish an article on Kol Nidre every year as a public service announcement. As everyone should know, Kol Nidre is the annual ritual in which observant, practicing, pious Jews declare that any and all vows they make in the coming year are null and void. The criminal orthodoxy of Judaism entails a criminal orthopraxy. Indeed, Judaism may be regarded as the sacralization of parasitism. The Jews regard their god as an accomplice in fraud, just like he was in the Old Testament, in which he showered favors upon pimps like Abraham, and had the Jews “borrow” gold, silver, and clothing from the Egyptians before they fled. Then as now, the Jews demand that others give them the shirts on their backs; then… Read more »

Holocaust is the latest of religions that like the ancient Hebrew demanded sacrifice for atonement. There was no forgiveness. Holycost merchandising like USA debt compounds not with manipulation of borrowing but exploiting the human mind and personality that has a need to find forgiveness, a need for expiation , which is abstract and infinite. When one acknowledges a material indebtedness, which three generations of its Holycost victims today condemn and indict us then will all be further enslaved and insulted with a condign ransom. We are learning the price of hospitality for the Jew. Instead of learning the error and being wise we are the same fool and protract our debt through confession to an imaginary crime. How much of this tribute to Israel is just Holocaust debt incognito just… Read more »

The “Holocaust” was a TV mini-series (1978). It’s a work of fiction. No Jews were harmed during the filming of this TV show. Any belief that the dramatic events portrayed in this TV mini-series have any basis in reality is either mistaken or… the result of a deliberate attempt to mislead the general public. Those who deliberately attempt to portray the “Holocaust” as a real event are usually recognized as suffering from a form of mental illness called “Munchausen’s Syndrome” i.e. “I’m a victim, I survived Auschwitz”, or “Munchausen’s by Proxy”. “Feel sorry for me, my Grand Mother died at Auschwitz”. This syndrome is more common among certain groups of people who have been known throughout history to be susceptible to “delusions of grandeur”, such as in calling themselves “God’s… Read more »

I just finished the book “Hoax of the Twentieth Century” by Arthur Butz, from back in the early/mid 1970s. Or at least, I read the 2003 updated version. It was a fantastic work of historical research. He should have been given a Nobel Prize for it, if it were not for jewish domination of yet another institution. I would not be surprised if the jews who run Hollywood made the late 1970s TV miniseries “Holocaust” as a response to that and several other works of debunking the holocaust legend (because that is what it really is, a legend). Just like the 1990s Schindler’s List, based on a fictional novel … not a real life event, was most likely another Holly-jew-wood response to the communist Polish gov’t rescinding the Auschwitz tally… Read more »