“Kars 4 Kids”: Another Brazen Scam, Profiting Off White Sympathy and Empathy for Children to Enrich Jews

These commercials are all over New York City media. One group of Jews was dissatisfied with their cut of the loot, so turned in the other faction. Nowhere in the advertisements is an explanation of how children are being benefited, nor is it disclosed that cars and money donated go to Jews exclusively.

AH, Kars4Kids, the earworm jingle that probably popped into your heads the moment you read that headline. Beyond providing a delivery device for the world’s most irritating jingle, Kars4Kids is supposed to be a charity that does… something. The commercials are never really clear what happens after you donate your car today. And consistent with its somewhat mysterious message of charity, members of a Staten Island synagogue are accusing Kars4Kids of using their temple to hide assets from the IRS.

According to the Post, members of the Young Israel of Eltingville synagogue on Staten Island filed court papers accusing the religious organization associated with the charity, Congregation Oorah, of trying to operate out of Young Israel in order to hide their “more questionable financial dealings.”

The court battle stems from an older fight between Young Israel and Congregation Oorah. That fight started with a secret deal made between Young Israel’s former president and Oorah to add the organization to the temple’s deed in exchange for $250,000 and building upgrades. When Oorah sought to turn some of the temple’s worship space into a classroom, Young Israel members and Oorah went in front of a religious court that awarded Oorah one million dollars. That ruling was appealed in State Supreme Court and is still being litigated. 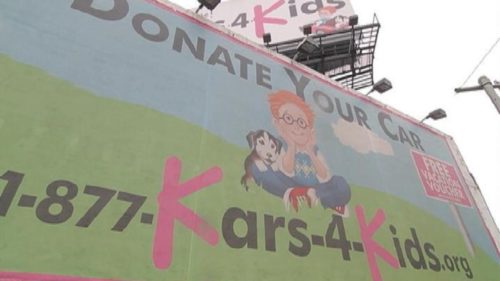 Congregation Oorah gets a big chunk of the money Kars4Kids makes from reselling cars and real estate (after advertising, promotional materials and payroll). Oorah has disputed the idea that Kars4Kids is just a front for the organization, which is concerned with “awakening Jewish children and their families to their heritage.” Kars4Kids has also been found to use a suspicious amount of their assets on failed real estate deals, including two high-rises in New Jersey, a Staten Island outlet mall and a mixed-use project in Jerusalem.

To read the article in its entirety click here.

Illicit Signals Palestine – The Ispal Codes
Trump to Jews: "We Must Stamp Out Anti-Semitism Wherever It Is Found"
New York City: Judge Orders Orthodox Jew to Stop Holding Paid "Sex Parties" in His Apartment
Florida: Multiracial Elementary Schools Become Violent Hells for Our Children
Why the Jews Want War
Charlemagne: Defender of the West or Servant of the Jews?
What's the Real Story About the Armenian Genocide?
New Jersey: Blacks Who Think They're Jews Encouraged by Rabbi
Tags:ChildrenJewish liesJewsNew York City

Scenes From the Apocalypse

The article clearly states that this “charity” is concerned with ‘awakening Jewish children and their families to their heritage”. How very racist of them! How dare they? I am sure that if a charity was organised to awaken white human children and their families to their unique culture and heritage….we would never hear the end of it. The fact that this “charity” is so obviously corrupt and run by crooks is almost beside the point. As is the fact that this “charity” does something very vague. Donate your money to charity, and we will give it all to the warmongering chosen that live in what used to be Palestine. As if it wasn’t bad enough that most “Christian churches” give their collection plates to these thieves. In fact, the last… Read more »

“Kars 4 Kids”: Another Brazen Scam, Profiting Off White Sympathy and Empathy for Children to Enrich Jews