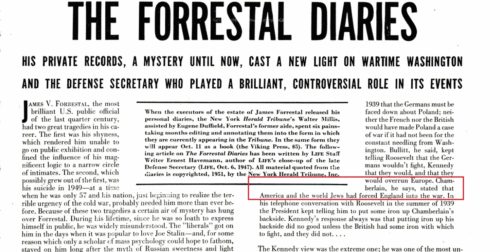 BRITISH PRIME MINISTER Neville Chamberlain told Joseph Kennedy, then US Ambassador to Great Britain, that “America and the world Jews” pushed Britain and Germany into war with one another. This exchange was documented in The Forrestal Diaries, the published journal of the first US Secretary of Defense, James Forrestal. US Jews, including William Bullitt, used economic and political leverage to foment an Anglo-German war.[1] (ILLUSTRATION: Excerpt from Life magazine, 15 October, 1951; click on image for a larger version.)

The following, reproduced at this site, is an excerpt of The Forrestal Diaries:

Played golf today with Joe Kennedy [Joseph Kennedy, US Ambassador to Great Britain right before World War II and father of future US President John F. Kennedy]. I asked him about his conversations with Roosevelt and Neville Chamberlain from 1938 on. He said Chamberlain’s position in 1938 was that England had nothing with which to fight and that she could not risk going to war with Hitler. Kennedy’s view: That Hitler would have fought Russia without any later conflict with England if it had not been for Bullitt’s [William C. Bullitt, US Jewish diplomat, descendant of Hyam Saloman, then US Ambassador to France] urging on Roosevelt in the summer of 1939 that the Germans must be faced down about Poland; neither the French nor the British would have made Poland a cause of war if it had not been for the constant needling from Washington. Bullitt, he said, kept telling Roosevelt that the Germans wouldn’t fight, Kennedy that they would, and that they would overrun Europe. Chamberlain, he says, stated that America and the world Jews had forced England into the war. In his telephone conversation with Roosevelt in the summer of 1939 the President kept telling him to put some iron up Chamberlain’s backside. Kennedy’s response always was that putting iron up his backside did no good unless the British had some iron with which to fight, and they did not. …

To summarize, Forrestal is saying that at the height of positive Anglo-German relations in 1938, US and world Jews in general were working to destroy those relations. In particular, US Jew and envoy, William C. Bullitt, was striving to undermine peace between Britain and Germany. Bullitt put pressure on Roosevelt to harden US diplomacy toward Germany. His pressure on Roosevelt succeeded in putting pressure on Britain. The aim of US and world Jewry was to use Poland to commit Britain to go to war against Germany.

In Freedom Betrayed, by Herbert Hoover, Bullitt is recounted pressuring Poland to refuse a deal of any sort with Hitler that would peacefully return Danzig to Germany:

Further American activities were disclosed after the Germans had invaded Poland in September 1939 and seized the Polish Foreign Office records. The Germans released a mass of documents which certainly indicated that the American Ambassador to France, William C. Bullitt, who could only act on Mr. Roosevelt’s authority, had made a profusion of oral assurances to officials of Poland and France which they could only interpret as a promise of assistance of some kind of force from the United States.

Bullitt left no doubt of the intended effect of US foreign policy toward Britain, Poland, and Germany. US would push Britain into a suicidal war, and the US would finish it:

As Ambassador Bullitt puts it: “If a war breaks out, we probably would not participate in it at the beginning, but we would finish it.”… One thing, however, appears to be certain, namely that President Roosevelt’s policy in the immediate future will tend to … weaken Britain’s tendencies toward a compromise [meaning that Britain would not be allowed to find a peaceful compromise between Poland or Germany, but instead pushed into offering a war guarantee to Poland that would simultaneously ensure no diplomatic deal on Danzig would be reached].

Chamberlain’s instinct was to avoid any commitments and to allow Germany and Poland to reach a compromise on Danzig, but Bullitt and Roosevelt were determined:

He said that after Chamberlain had given these guarantees, Chamberlain told him (Kennedy) that he hoped the Americans and the Jews would now be satisfied but that he (Chamberlain) felt that he had signed the doom of civilization.

The immediate result of Jewish involvement in British, German, and Polish diplomacy was threefold: 1) It exerted pressure on Roosevelt to increase tensions between Britain and Germany, 2) it directly pressured Britain into making a promise to go to war with Germany, leading to the “war guarantee” of 31 March, 1939, and 3) this, in turn, influenced the Poles to refuse any further negotiations with Hitler for a peaceful resolution to Danzig or the Corridor. Its long term result was, in Chamberlain’s own words, the “doom of civilization.”

1. I previously posted this research, but it is included again with additional quotes to deepen the historical context. See also this IHR article as well as this research.

Great. Jews running amok in our foreign offices; causing wars, inducing economic collapse, breaking down sovereignties, rankling for assassinations and fomenting vast invasions of immigrants. What could be more idiotic than any sort of jew in any diplomatic position of any Europid nation? My lord, dust off the Protection Laws and bring them back ten times their former strength.

Both Forrestall and Patton were murdered after the war because they knew who caused it and why.

Great. Jews running amok in our foreign offices; causing wars, inducing economic collapse, breaking down sovereignties, rankling for assassinations and fomenting vast invasions of immigrants. What could be more idiotic than any sort of jew in any diplomatic position of any Europid nation? My lord, dust off the Protection Laws and bring them back ten times their former strength.