IT HAS BEEN an issue for some time whether neoconservative, pro-Jewish international broadcast and newspaper baron Rupert Murdoch is part Jewish. His Wikipedia entry makes no mention of any Jewish ancestry, but that source sometimes does not do so even when it exists. One of Murdoch’s sisters is named Anne Kantor, so she evidently married a Jew. Jews routinely marry into social elites (the Trumps, Clintons, Kennedys, et cetera).

The question seems to be whether Murdoch’s mother, née Elisabeth Greene, who died a few years ago at age 103, was Jewish or part Jewish. Her extensive Wikipedia entry makes no mention of any Jewish ancestry.

In June 2003, Richard Curtiss, co-founder and editor of the the Washington Report on Middle East Affairs, wrote in that publication that Murdoch’s mother was “an Orthodox Jew, although Murdoch never offers that information in his biographies.” Curtiss was an ex-foreign service officer (US State Department), US Information Agency (USIA), and Voice of America employee.

Without explicitly saying that Murdoch’s mother was Jewish, the Web site Voz Iz Neias (Yiddish for “What’s news?”), which describes itself as “a highly popular, rapidly-growing blog that meets the demanding media needs of the Orthodox Jewish community in New York, across the United States, and around the world,” noted her death and carried the photo above showing Rabbi Chaim Herzog with Mrs. Murdoch. The photo looks a bit odd, as if Herzog’s image has been superimposed, but perhaps not. Some observers believe Mrs. Murdoch’s appearance is distinctively Jewish.

I believe it was Kevin Alfred Strom who once pointed out that Rupert Murdoch’s behavior — fanatical adherence to the Jewish/Zionist party line while at the same time never acknowledging Jewish roots, and siring children with two non-Jewish women — is consistent with a belief that his own ancestry was somehow too “impure” to pass on as Jewish, yet Jewish enough to inspire intense devotion. But if, as Curtiss suggests, his mother was an Orthodox Jew, Rupert’s blood wouldn’t be impure by Jewish standards.

Your reporter is inclined to give credence to Curtiss’s account in the absence of persuasive evidence to the contrary.

Dame Elisabeth married in a Catholic church and her funeral was held at St Paul’s Anglican cathedral in Melbourne. That does not sound very Jewish to me.

Ever hear of the term Crypto-Jew?

Excellent observation. This guy (Frank Plata) obviously never heard or read about the hundreds of Jews that “converted” to Christianity in 1492 to avoid being expelled from Spain. Thanks to the imbecility of the gullible Christians they infiltrated the Church, the nobility and the universities.

This example was imitated by other Jews across Europe over the centuries with the most awful consequences.

Angelicus writes about the “ hundreds of Jews that “converted” to Christianity in 1492 to avoid being expelled from Spain.”

Yes, those “conversos,” aka “dampened Jews,” aka crypto or secret Jews, but more properly Marranos. These new Christians would continue secretly practicing their Jew traditions for decades even centuries until it was safe for them to come back out of the closet as Jews.

They may have converted to Christianity, but they could never convert into Aryans.

Maybe Rupert Murdoch’s FOX exec sons, James and Lachlan, had goy mothers, but they didn’t fall far from their daddy’s Jew tree. They each donated $1 million to the Jewish Anti-Defamation League of B’ad B’reath (ADL) after Charlottesville. That’s a lot of money. 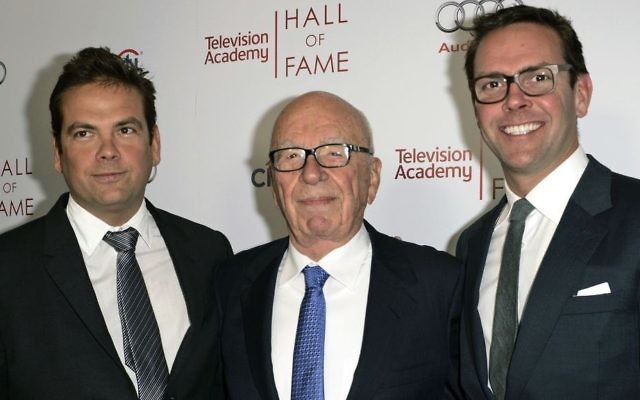 I know is a bit of a long shot but Rupert Murdoch’s mother’s surname was Greene; this surname figures in the book “The Surnames of Ireland” by Edaward MacLysaght (1997) with the variation Green. The tricky point here is that Jews many times adopted Aryan surnames, in fact Green or Greene is very popular among Jews who live in English-speaking countries. I would say this is a 50-50 situation So, basically in this case we should follow our instinct. She looks very Jewish to me. Irrespective of that what matters are the actions and as Mr Williams pointed out, Rupert Murdoch is a fanatic Zionist and his sons are very much the same, the fact that they may have Jewish blood or not is irrelevant, their actions define them as… Read more »

About thirty-five years ago I met a young teenager sitting underneath a tree. I said that the fruits of the tree were edible. He replied that he had different problems. He was going to inherit a billion dollars. I told him he should try to be harmless and useful with it. I don’t know which of the two Murdoch sons it was.

Angelicus: .Rupert Murdoch is a fanatic Zionist and his sons are very much the same, the fact that they may have Jewish blood or not is irrelevant, their actions define them as mortal enemies. Let’s not forget that for every Jew there are, at least, five Aryan traitors. — Note in that same article I linked to above that goy traitor Tim Cook — hardly an Aryan — gave more (or Apple did) to our oh-so-civicminded Jew watchdogs than did the Murdoch boys. Apple CEO Tim Cook also pledged that his company will donate $1 million each to the Anti-Defamation League and the Southern Poverty Law Center… Apple also will match employee donations to the two groups and others two for one… https://jewishnews.timesofisrael.com/apple-boss-tim-cook-speaks-hebrew-in-address-at-antisemitism-conference/ You folks with iPhones: think about that… Read more »

Thank you for pointing out another vile traitor Mr. Williams. I found out that this disgusting creature is also a “proud” homosexual, that means a degenerate who, according to Wikipedia, had the cheek to say: “I consider being gay one of the greatest gifts that God ever gave me”. I rest my case

If she was a Jewess, she does not deserve, nor should she be addressed using, any such title.

Greetings AbsurdinessBrown and Bruno Anthony. Jews were expelled by from Britain by King Edward 1’s Royal Decree which has never been revoked by another Royal Decree. And yet she has been granted an imperial honour.

There is no better justification for a Jewish state, than the Neo- Nazi hatred, spewing from this site. Why would the Jews ever surrender their nationhood just to be at the mercy of these types.

Greetings Felonius. You are not in fact speaking from the high moral ground. Research the Jews’ hatred, their crimes and their lies and hypocrisy. They want every nation to “surrender their nationhood” except their own, so that we will be at their mercy.