THIS NEW video by Omniphi celebrates the life and work of George Lincoln Rockwell and was produced on March 9, 2015 — what would have been Rockwell’s 97th birthday. A talented advertising man and artist, and a compelling public speaker, Rockwell’s loyalty to his race and to fundamental principles caused him to break with conservatism and embrace Nature-based National Socialism, which he revived in a uniquely American — and uniquely Rockwellian — form beginning in the 1950s in Arlington, Virginia.

Among those he influenced were the late Matt Koehl, who took his movement in a more strictly spiritual direction; and Dr. William Pierce, who published the intellectual journal National Socialist World while working for Rockwell before going on to found and lead the National Alliance.

Some notable quotes from George Lincoln Rockwell include:

“We must have a foreign policy which is based only on the long-term interests of our race, not on the interest of other races or on economic considerations or anything else.”

“We must make it an imperative duty of our government to protect the gifts which Nature has bestowed on America and to insure the maintenance of a clean, healthy, wholesome environment for our people.”

“It is not the evil itself which is horrifying about our times – it is the way we not only tolerate evil, but have made a cult of positively worshipping weakness, depravity, rottenness and evil itself.”

“Being prepared to die is one of the great secrets of living.”

“So far, ladies and gentlemen, look at the leaders we’ve had. We’ve had some very great ones. I would have gladly given my life following Douglas MacArthur. And I offered to fight and do anything for Joe McCarthy. And yet not one of these men ever once had the nerve to stand up and say, ‘I am a White man, and I’m going to fight as a White man.’ Even George Wallace today is still saying, ‘Racism is evil.’ And I believe that if we keep saying this, for the benefit of the Jews, so they won’t call us hate mongers and racists — we’re going to get whipped. I believe the time is too short. Time is desperately short. It is time to stand up and tell the whole truth, and to fight for it. To organize, not as conservatives, not as Republicans, not as Democrats, not as liberals, not as Northerners, not as Southerners, not as Protestants, or religious, or anti-religious, or anything else but as White men. Stand up with all our hearts and souls and unite!”

The Jewish War on Sweden 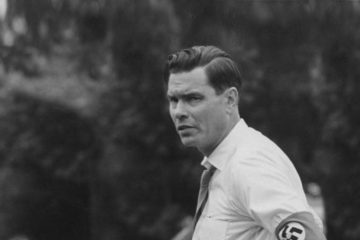 A Nazi of the ol’ White Peoples Party in the 2d half of the 1960s in Los Angeles told me that Rockwell placed his operation near the Potomac knowing if they were attacked by fire, vandalism, etc., it would make world news, whereas an operation assaulted in a remote place could easily be covered up. Smart ! !

I think George Wallace did as best he could according to circumstances. The man took about 4 bullets and remained on drugs in a wheel chair for the duration of his life.