Introduction: August 25, 2018, marks the 51st anniversary of the assassination of George Lincoln Rockwell. Rockwell is the father of both contemporary, post-1945 National Socialism, as well as the modern White Nationalist movement.

Unfortunately, many people new to National Socialism know little more about him than his name.

Here is the authorized biographical sketch of Rockwell that was published by the American Nazi Party in the 1960s. Our comments follow.

Who is George Lincoln Rockwell?

GEORGE LINCOLN ROCKWELL was born in Bloomington, Illinois, the home of his maternal grandfather on March 9, 1918. His father was a very successful headline comedian from 1912 until about 1935. His ancestors were German, French, English and Scottish, numbering among them many Revolutionary War figures, back to Marie Antoinette, the French queen.

Rockwell was in Bloomington only until he was old enough to get out of the hospital, when he was taken on the vaudeville circuit by his parents. He then spent some time in New Jersey, New York and California, but most of the time in Bootbay Harbor, Maine.

He attended Hebron Academy, a prep school near Lewiston, Maine, after which he entered Brown University in Providence, Rhode Island, majoring in philosophy. In college, Rockwell enjoyed and did well in science and other objective courses but fought blindly and instinctively against the “sociology” and other similar departments which, unknown to him, were then preaching the Marxist environmentalism and egalitarianism, which have played such havoc with our human, biological sciences.

Leaving Brown in the middle of his junior year, when it became obvious that the US would get into World War II, Rockwell enlisted as a Seaman in the United States Navy in Boston, Massachusetts. By the time of the entrance of the US into World War II on December 7, 1941, he had entered Naval Aviation, and became a cruiser and battleship scout pilot and a fighter pilot. He served aboard the USS Omaha in the South Atlantic and off North Africa during the invasion. He was then sent to the naval photographic school for pilots and assigned to the USS Wasp and sent to the Pacific. He also became a commander of forward air control operations for Marine Corps assault troops. He was at Guadalcanal, Guam and other Pacific “hot spots.” At the end of World War II, he was commanding officer of a squadron in Hawaii, and had earned nine decorations.

Released from active duty, Rockwell attended Pratt Institute Art school in New York, working part time in advertising and commercial art. In 1948, while still at Pratt, he won first prize of $1,000 in the National Society of Illustrators competition for a full page newspaper ad for the American Cancer Society.

While still in the ready reserves as commanding officer of a squadron in Washington, DC, he launched a new magazine, U.S. Lady, for the wives of US servicemen.

In 1949, Rockwell founded the first big national advertising agency in the state of Maine. Recalled to active duty for the Korean War in 1950, he trained Marine and Navy pilots in close support of troops, and then was transferred to Iceland, where he became the commanding officer of a squadron at Keflavik.

About this time he became deeply concerned about the way that all he had fought for in two wars was being turned over to communism.

He noticed that almost all of the convicted communist spies and traitors, such as Julius Rosenberg, Ethel Rosenberg, Nathan Silvermaster, Harry Dexter White (Weiss), Robert Soblen, Morton Sobell, David Greenglass, Harry Gold, Miriam Moskowitz, Fred Rosenberg, and Sam Cohen (chief of the communist spies caught in Canada), and most of the communist intellectual leaders, such as Herbert and Bettina Aptheker, were racial Jews. He was especially shocked to find that Who’s Who in Jewry, published by the Jews themselves, listed many of these atheist communists very proudly as Jews, even though he had believed that the Jews were just a religion.

Observing that Hitler had said that communism was Jewish, and that the Jews were out to degenerate the White race by subversion and race-mixing, Rockwell bought a copy of Mein Kampf and read it, even though he thought he already knew what was in it from all he’d heard. He was astonished to find that it was actually a brilliant analysis of the mess that Western Civilization has gotten into, and the only plan he’d ever seen to save the White race and its culture.

For a number of years he tried to work with various right-wing organizations, all of whom believed, as he did for a while, that it was necessary to disguise one’s admiration for Adolf Hitler and National Socialism.

Finally disgusted with the emptiness, the weakness, the hypocrisy and especially the cowardice of the so-called “conservatives,” Rockwell determined to attack at last, flying the Swastika banner which came so close to saving Western Civilization and the White race. “Since our Cause is fundamentally the truth,” he explained to horrified friends, “I do not see how we can win by lying or misrepresenting what we are for fear of the Jews.”

“The only times in the hundred years of the rise of communism that this plague has actually ever been beaten, it was beaten not by ‘conservatives,’ but by radicals and fighters whom the enemy calls ‘Nazis’ and ‘fascists,’ and whom they really fear. Only in Germany, Spain and Italy has communism ever been conquered. We are damned fools to be afraid to follow the only examples that have ever worked!”

He hung up a Nazi banner in front of his home and dared the Jews to do something about it. They — and their friends and dupes — came in droves to “do something about it,” but Rockwell survived all the shootings, rocks and other Jewish “arguments.” The publicity gave him such a much needed platform from which to call the attention of his fellow Americans to the increasingly desperate situation of America and our great White family of people.

Speaking at colleges, at great city rallies and to private groups, Rockwell has won a larger and larger circle of responsible Americans who begin to realize that the old pray-talk-petition-and-stamp-licking societies will not save America and our White race.

Rockwell believes that it is now time for the White Man to take America back from the aliens, the minorities and the terrorists now in power under the demagoguery of cheap politicians. To do this we must win not the few in the right-wing, or the upper classes, but the millions and millions of our people. And to win these people we must offer something besides a lot of empty platitudes about freedom and the Constitution. Only National Socialism has a positive and progressive program for all the people, rather than just the upper class, and combines a concern for the purity and protection of the great White race with a fighting determination to stop all further mongrelization of our people. 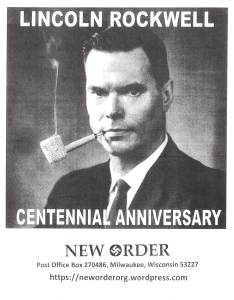 In five short years, Rockwell has led the American Nazi Party from a tiny and scorned band of roughnecks willing to take to the streets to fight treason and race-mixing, until today the Party has headquarters in Washington, Chicago, Los Angeles and most major cities, and commands a grudging respect of the enemy, even though there is a powerful censorship of the American right-to-know of what Rockwell is doing, as shown by an article in the Spring, 1965, issue of the Columbia Journalism Review by Ben H. Bagdikian.

The Party publishes The Rockwell Report (monthly), The Stormtrooper Magazine (quarterly) and National Socialist World (quarterly), plus bulletins available to Party members only.

Rockwell is presently organizing the WHITE GUARD — young, White fighting men to help protect society from the Black and Red revolution which has already overwhelmed police departments in Los Angeles, Chicago, Cleveland and other cities.

Comments by James Harting: For most of his career as commander of the ANP, Rockwell lived a marginal existence on the fringes of the American political scene. He was misunderstood and rejected by the vast majority of his fellow White Americans, whom he dearly loved. He and his “tiny band of roughnecks” were alternately cursed, ridiculed and ignored by the mainstream media. They fought street battles without end with communist and Jewish thugs who sought to silence them by force, and spent many a night in jail, courtesy of hostile politicians and corrupt police officials.

But throughout it all, Lincoln Rockwell’s warrior spirit of courage, integrity and heroic defiance was never broken.

His persistence finally paid off in 1966, when thousands of White men, women and youth in Chicago followed his leadership in a spontaneous uprising against efforts to integrate all-White working class neighborhoods. The uprising culminated in the now-famous White People’s March of September 10, 1966, in which hundreds of ordinary Whites followed Rockwell’s leadership under the sign of the Swastika.

Tragically, within a year Rockwell was dead. On August 25, 1967, this authentic American hero fell beneath the bullets of a cowardly Marxist sneak-murderer.

Yet, although Rockwell’s body died on the black August afternoon, his spirit lives on in the hearts and minds of White men and women everywhere who continue to draw strength and inspiration from his heroic example.

• This Time the World (1962), his political autobiography; and
• White Power (1966), published posthumously, and which was the basic National-Socialist and White Nationalist ideological handbook for a generation.

Print copies of both books are available from NS Publications, at http://nspublications.com

In 1960, at the beginning of his career as an open National Socialist, Rockwell wrote In Hoc Signo Vinces, a short manifesto in which he summarized his ideas and political strategy. You may read it online here:

On January 1, 1967, Rockwell re-named his party as the National Socialist White People’s Party. In 1984, the NSWPP was reorganized by Rockwell’s successor, Matt Koehl, as the NEW ORDER. It continues to this day.

Dinesh D'Souza is the Big Liar

Naval Aviator “Rockwell was recalled to duty as a lieutenant commander at the beginning of the Korean War.”

Most informative. The enemy Jews will do everything
in their power to “dispage” this man.

I have read Mein Kampf like GLR did and like him, I am completely convinced that National Socialism is the only answer for the survival of our folk.

If anyone knows of a better way to preserve our race, I’d love to hear it. Until then, I will be National Socialist until the day I die. Sieg Heil.

This man was courageous, especially to wave the Nazi flag so soon after the war. Clearly he had enough clout for CIA-Mossad to murder him.

Does anyone know anything about Daniel Burros, Roy Frankhauser, Sanford Griffith, or Robert DePugh in regards to their associations with George Rockwell?