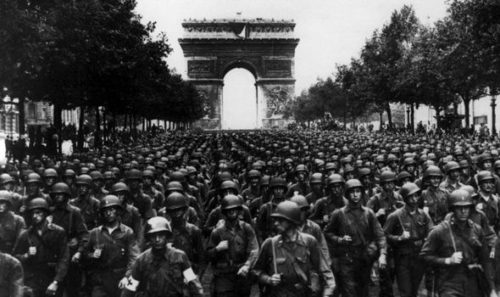 Upon the occupation of France by American soldiers, French women had much to fear as large numbers of rapes and other terrible crimes were committed across the country.

A NEW BOOK shows us that the liberators made a lot of noise and drank too much. They raced around in their jeeps, fought in the streets and stole. But the worst thing was their obsession with French women. They wanted sex — some for free, some for money and some by force…. (ILLUSTRATION: American soldiers marching in Paris with the Arc de Triomphe in the background)

By the late summer of 1944, large numbers of women in Normandy were complaining about rapes by US soldiers. Fear spread among the population, as did a bitter joke: “Our men had to disguise themselves under the Germans. But when the Americans came, we had to hide the women.”

With the landing on Omaha Beach, “a veritable tsunami of male lust” washed over France, writes Mary Louise Roberts, a history professor at the University of Wisconsin, in her new book What Soldiers Do: Sex and the American GI in World War II France. In it, Roberts scrapes away at the idealized picture of war heroes. Although soldiers have had a reputation for committing rape in many wars, American GIs have been largely excluded from this stereotype. Historical research has paid very little attention to this dark side of the liberation of Europe, which was long treated as a taboo subject in both the United States and France.

American propaganda did not sell the war to soldiers as a struggle for freedom, writes Roberts, but as a “sexual adventure.” France was “a tremendous brothel,” the magazine Life fantasized at the time, “inhabited by 40,000,000 hedonists who spend all their time eating, drinking (and) making love.” The Stars and Stripes, the official newspaper of the US armed forces, taught soldiers German phrases like: “Waffen niederlegen!” (“Throw down your arms!”). But the French phrases it recommended to soldiers were different: “You have charming eyes,” “I am not married” and “Are your parents at home?”

[EDITOR’S NOTE: This crude vision of French womanhood and the sexual rewards “due” to conquering Americans, Black and White, is not dead even today. Writing in the Daily Mail last August (link http://www.dailymail.co.uk/news/article-2726185/50-years-ago-Paris-finally-overthrew-Nazis.html ), Antony Beevor says as much no fewer than three times in one short article: “Paris celebrated with open arms, open beds and plenty of cognac”; “Paris welcomed officers with open arms and open beds after their triumph”; and “Paris celebrated with open arms and open beds.”]

After their victory, the soldiers felt it was time for a reward. And when they enjoyed themselves with French women, they were not only validating their own masculinity, but also, in a metaphorical sense, the new status of the United States as a superpower, writes Roberts. The liberation of France was sold to the American public as a love affair between US soldiers and grateful French women.

On the other hand, following their defeat by the Germans, many French perceived the Americans’ uninhibited activities in their own country as yet another humiliation. Although the French were officially among the victorious powers, the Americans were now in charge.

The subject of sex played a central role in the relationship between the French and their liberators. Prostitution was the source of constant strife between US military officials and local authorities.

Some of the most dramatic reports came from the port city of Le Havre, which was overrun by soldiers headed home in the summer of 1945. In a letter to a Colonel Weed, the US regional commander, then Mayor Pierre Voisin complained that his citizens couldn’t even go for a walk in the park or visit the cemetery without encountering GIs having sex in public with prostitutes.

“Scenes contrary to decency” were unfolding in his city day and night, Voisin wrote. It was “not only scandalous but intolerable” that “youthful eyes are exposed to such public spectacles.” The
mayor suggested that the Americans set up a brothel outside the city so that the sexual activity would be discreet and the spread of sexually transmitted diseases could be combated by medical personnel.

But the Americans could not operate brothels because they feared that stories about the soldiers’ promiscuity would then make their way back to their wives at home. Besides, writes Roberts, many American military officials did not take the complaints seriously owing to their belief that it was normal for the French to have sex in public.

But the citizens of Le Havre wrote letters of protest to their mayor, and not just regarding prostitution. We are “attacked, robbed, run over both on the street and in our houses,” wrote one citizen in October 1945. “This is a regime of terror, imposed by bandits in uniform.”

‘The Swagger of Conquerors’

There were similar accounts from all over the country, with police reports listing holdups, theft and rapes. In Brittany, drunk soldiers destroyed bars when they ran out of cognac. Sexual assaults were commonplace in Marseilles. In Rouen, a soldier forced his way into a house, held up his weapon and demanded sex.

The military authorities generally took the complaints about rape seriously. However, the soldiers who were convicted were almost exclusively African-American, some of them apparently on the basis of false accusations, because racism was also deeply entrenched in French society.

[The Speigel author is somewhat disingenuous here. It is well-known that Black American soldiers were brought in to both France and Italy as part of the “conquering Army” and their rapes of White women in both countries were a source of outrage and complaints. Even today, Blacks commit interracial rape at thousands of times the White rate. In US-occupied France, out of what must have been a huge number of rapes, only 29 were punished — and 25 of these were committed by Blacks. There is some small satisfaction in knowing that they were punished by hanging. — Ed.]

A café owner from Le Havre expressed the deep French disillusionment over the Americans’ behavior when he said: “We expected friends who would not make us ashamed of our defeat. Instead, there came incomprehension, arrogance, incredibly bad manners and the swagger of conquerors.”

On the eve of the Normandy invasion, the American President addressed the nation with a prayer. It is ironic that this prayer states his men are not fighting for conquest but for “tolerance and good will”, whereas the later actions of his soldiers speak otherwise.

“My fellow Americans: Last night, when I spoke with you about the
fall of Rome, I knew at that moment that troops of the United States
and our allies were crossing the Channel in another and greater
operation. It has come to pass with success thus far.

“And so, in this poignant hour, I ask you to join with me in prayer:

“Almighty God: Our sons, pride of our Nation, this day have set upon
a mighty endeavor, a struggle to preserve our Republic, our
religion, and our civilization, and to set free a suffering humanity.

“With Thy blessing, we shall prevail over the unholy forces of our
enemy. Help us to conquer the apostles of greed and racial
arrogancies. Lead us to the saving of our country, and with our
sister Nations into a world unity that will spell a sure peace a
peace invulnerable to the schemings of unworthy men. And a peace
that will let all of men live in freedom, reaping the just rewards
of their honest toil.

Napoleon spoke : there are no bad soldiers, only bad officers. I have not read the book but I believe such things happened.

Where were the officers?! Eisenhower did not know of this, nor of his beloved “resis -tance “, that murdered many French men and women as collaborators?!

“The obvious is the most difficult truth you can see” Clarice Lispector, Brazilian writer The first DEMOCRATS came to power through a bloody revolution, known as FRENCH REVOLUTION. COMMUNISTS came to power in Moscow through an even more bloody revolution. Adolf Hitler’s National German Socialism came to power only through popular elections. Nevertheless, to this day they are systematically defamed and vilified as violent by the adversary propaganda.https://nationalvanguard.org/2019/02/swastikas-swastikas-everywhere/?unapproved=23182&moderation-hash=c492e6eb4c89b04a1eb8cda83c73f264#comment-23182 There is no more recurrent communist expedient than to attribute to their opponents their own vileness and curse them of their own lack of character. “For six years, the world thought of fighting for the banner of freedom and democracy that the allied countries created on behalf of Poland. But when the victory was consummated, entire countries, including Poland itself, lost their… Read more »