GERMANY’S DEFEAT in May 1945, and the end of World War II in Europe, did not bring an end to death and suffering for the vanquished German people. Instead the victorious Allies ushered in a horrible new era that, in many ways, was worse than the destruction wrought by war. (ILLUSTRATION: German expellees lost almost everything after the war, many losing their lives.)

In a sobering and courageous book, After the Reich: The Brutal History of the Allied Occupation (now available at the IHR Bookstore), British historian Giles MacDonogh details how the ruined and prostrate Reich (including Austria) was systematically raped and robbed, and how many Germans who survived the war were either killed in cold blood or deliberately left to die of disease, cold, malnutrition or starvation.

Many people take the view that, given the wartime misdeeds of the Nazis, some degree of vengeful violence against the defeated Germans was inevitable and perhaps justified. A common response to reports of Allied atrocities is to say that the Germans “deserved what they got.” But as MacDonogh establishes, the appalling cruelties inflicted on the totally prostrate German people went far beyond that.

His best estimate is that some three million Germans, military and civilians, died unnecessarily after the official end of hostilities.

A million of these were men who were being held as prisoners of war, most of whom died in Soviet captivity. (Of the 90,000 Germans who surrendered at Stalingrad, for example, only 5,000 ever returned to their homeland.) Less well known is the story of the many thousands of German prisoners who died in American and British captivity, most infamously in horrid holding camps along the Rhine river, with no shelter and very little food. Others, more fortunate, toiled as slave labor in Allied countries, often for years.

Most of the two million German civilians who perished after the end of the war were women, children and elderly — victims of disease, cold, hunger, suicide, and mass murder.

Apart from the wide-scale rape of millions of German girls and woman in the Soviet occupation zones, perhaps the most shocking outrage recorded by MacDonogh is the slaughter of a quarter of a million Sudeten Germans by their vengeful Czech compatriots. The wretched survivors of this ethnic cleansing were pitched across the border, never to return to their homes. There were similar scenes of death and dispossession in Pomerania, Silesia and East Prussia as the age-old German communities of those provinces were likewise brutally expunged.

We are ceaselessly reminded of the Third Reich’s wartime concentration camps. But few Americans are aware that such infamous camps as Dachau, Buchenwald, Sachsenhausen and Auschwitz stayed in business after the end of the war, only now packed with German captives, many of whom perished miserably.

The vengeful plan by US Treasury Secretary Henry Morgenthau to turn defeated Germany into an impoverished “pastoral” country, stripped of modern industry, is recounted by MacDonogh, as well as other genocidal schemes to starve, sterilize or deport the population of what was left of the bombed-out cities.

It wasn’t an awakening of humanitarian concern that prompted a change in American and British attitudes toward the defeated Germans. The shift in postwar policy was based on fear of Soviet Russian expansion, and prompted a calculated appeal to the German public to support the new anti-Soviet stance of the US and Britain.

MacDonogh’s important book is an antidote to the simplistic but enduring propaganda portrait of World War II as a clash between Good and Evil, and debunks the widely accepted image of benevolent Allied treatment of defeated Germany.

This 615-page volume is much more than a gruesome chronicle of death and human suffering. Enhanced with moving anecdotes, it also provides historical context and perspective. It is probably the best work available in English on this shameful chapter of twentieth century history.

Mark Weber is director of the Institute for Historical Review.

The Evidence of the Prussian Blue
Background on Trump Inauguration Rabbi and His Anti-White Group
The Racial Will to Live
Ships Experience Karma Too
The Shoah: Fictive Images and Mere Belief?
Dresden: A Real Holocaust
Survivor: Pictures of the Liberation of Auschwitz Are Fake
The Dresden Holocaust and the Numbers Game
Tags:European historyGiles MacDonoghInstitute for Historical ReviewMark WeberWorld War 2

The World in False Face 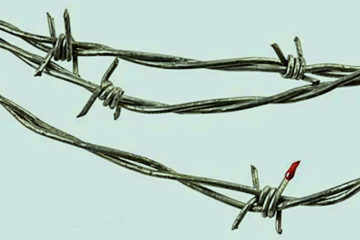 Walk on the Rhine

These countries have the nerve to demand reparations from Germany.

On top of it, us Germans never did anything wrong it was all fabricated evidence by these Jewish creatures the Bolsheviks, Americans, Britons, French, Polish, Chinese, Koreans, etc. and all of the communist puppet nations who aided must understand German suffering and those of like mind shall bring it.