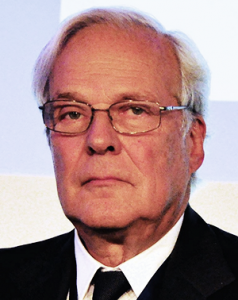 EDITOR’S NOTE: About the only time the Jewish bankers get their fingers burned is when they deny their partners-in-crime, the US and other Western governments, a “fair” cut of their ill-gotten loot. And the fines they suffer — a paltry few million — hurt them about as much as being hit in the head with the blunt side of a toothpick. But a different time is coming soon…

ONE OF EUROPE’S wealthiest bankers faces questioning for fraud in France as part of a years-long case that accuses him of defrauding retirees.

Baron David de Rothschild (pictured), one of the wealthy members of the famous Rothschild banking dynasty, was indicted last month over allegations that his company, Rothschild Financial Services Group, offered a fraudulent equity release loan program to about 130 retirees between 2005 and 2008. 20 British retirees living in Spain brought the fraud lawsuit, according to Olive Press, an English-language newspaper published in that country, but it’s taken five years of legal maneuvering to successfully force the Baron into court.

Rothschild Financial Services Group is accused of falsely advertising the scheme, under which retirees were told they could reduce the value of their French homes in order to reduce the inheritance tax that their descendents would for those properties. According to the report, France’s “Tax Agency ruled that such a scheme constitutes fraud.”

Antonio Flores, one of the lawyers prosecuting the case, told Olive Press, “In short, independently of what happened to the investment, Rothschild advertised a loan aimed at reducing inheritance tax, which is a breach of tax law.”

With a summons for questioning signed by a Paris-based judge, the next step was to find Baron Rothschild, who could have been staying at any of several French properties, including a castle in Normandy.

Also in June, the U.S. Department of Justice announced that another Rothschild-owned business, Rothschild Bank AG, based in Zurich, Switzerland, must pay $11.1 million in fines for helping Americans conceal their taxable assets overseas.

“Rothschild Bank, which had U.S.-related accounts with an aggregate maximum balance of about $1.5 billion, knew it was “highly probable” that some Americans weren’t compliant with income tax and reporting obligations, and that some were hiding behind sham entities in Liechtenstein, Panama and the British Virgin Islands,” the Justice Department said, according to Giles Broom, writing in Bloomberg Business.

Rothschild Bank was one of 100 firms subject to a probe of overseas banking. So far, eight other Swiss banks have agreed to similar settlements with the U.S. government. Broom outlined the effects of the Swiss banking probe so far:

“The U.S. probe of the Swiss financial industry has already hit the country’s biggest banks, UBS Group AG and Credit Suisse Group AG, for more than $3 billion. About a dozen others, such as Julius Baer Group Ltd. and the Swiss unit of HSBC Holdings Plc, still face separate criminal investigations that may result in fines.

“Rothschild closed about 296 U.S.-taxpayer accounts between Aug. 1, 2008 and Dec. 31, 2013 and encouraged customers to voluntarily disclose undeclared assets to the Internal Revenue Service.”

At one time, the Rothschild family were one of the most powerful in the world, with their fortune built off warfare and corruption. The Rothschilds became hyper-rich through financing England’s Napoleonic Wars in the early 1800s, and accusations of insider trading and improper influence over global politics have dogged them ever since. Though still powerful, they have withdrawn from the public limelight in recent history, and many believe their fortunes, while still great, have fallen from their historic heights.

Authorities Losing Control as Paris Riots Spread
The Fraud of Black History
How Hitler Defied the Bankers
Jews Furious About Greeks Being Allowed to Vote on Bailout
The Majority Ruse
Who Does That
France: Politician Punished for Pointing Out "France is a White Country"
New Italian Coalition: We Are Locked Out of Governing by "The Lords of the Spread"
Tags:BankersBanking CorruptionFranceFraudRothschild Bank

The Antithesis of Apartheid