BACK WHEN #GamerGate started, we were all warned that it wasn’t going to stop with video games. Cancel culture is going to invade every single aspect of your life. Don’t think it won’t:

Prolific children’s writer Enid Blyton’s work has been linked to ‘racism and xenophobia’ by English Heritage after a review of its blue plaques following last summer’s Black Lives Matter protests.

The celebrated English children’s author has enchanted millions of young readers for a century with tales of adventure, ginger beer, and buns, selling 600 milllion books in 90 languages.

But Mrs. Blyton, whose novels have been among the world’s best-sellers since the 1920s, has been linked to racism in updated blue plaque information produced by the charity English Heritage on its Web site and app.

It says: ‘Blyton’s work has been criticised during her lifetime and after for its racism, xenophobia and lack of literary merit. In 2016, Blyton was rejected by the Royal Mint for commemoration on a 50p coin because, the advisory committee minutes record, she was ‘a racist, sexist, homophobe and not a very well-regarded writer’.

This is what your submission to “equality” and “diversity” and “tolerance” has wrought. Every single time you said “I’m not racist, but….” or “I believe in equality of opportunity, not equality of result” or “I have lots of [fill-in-the-blank] friends” or “they just want the same chance for love and respect that everyone else does,” you helped make this possible.

Enid Blyton’s Wikipedia page is now mostly a tsunami of every bad review she ever got, a dozen or so it seems, even though she was loved by millions of children and adults alike and her books are still wildly popular a half century after her death. She committed the terrible sin — in the eyes of the Jewish power structure — of portraying White children as beautiful, creative, loving beings, and Whiteness itself as something good. For that, the Jews cannot forgive her.

Words matter. Ideas matter. Yes, insane “leftists” and “liberals” and their Jewish masters drove the canceling process, but conservatives and Christians and “nice people” were required to accept the lies in order to make it work.

You cannot retain your status as what the Jewish power structure paints as a “good person,” let alone a “nice person,” and stand against the swamp of lies with which evil engulfs the world. Every single little compromise you make, every single little dishonesty to which you submit in order to keep your “acceptable” status, contributes to the sum total of evil in the world and the triumph of those who are trying to kill us all.

And true goodness and morality requires that we stand up and speak out against the Jewish tyranny of money, lies, and corrupted “leaders” and celebrities. There are far more of us than there are of them. Stop standing in the shadows. Stop pretending. Join the National Alliance and support the Alliance with all your heart! Build a new paradigm and a new community and a new nation.

I had never heard of Enid Blyton and found this article fascinating. Her Wikipedia page cannot obfuscate her determination to succeed. I was amused by the entry that she joined a set that played tennis in the nude. Of course, I dismiss all such Jewish inspired rubbish concluding that even if true, what does that have to do with her prolific writing career on behalf of children? I wanted to buy one of her books, which still must command a fortune in royalties, but I am already behind on about 20 other books all in search of explaining how we got into this Jewish mess.

Apparently, she used black “golliwogs” as humorous characters in a story or two, described a robber as a “foreigner” once, and populated her stories almost exclusively with noble-looking White people. Pure evil, from a Jewish point of view.

purely evil to depict your own race in a noble light…..and want for its perpetual preservation….we are such a malevolent race. i’m so utterly ashamed.

i’ve got a couple dozen books yet to be read concerning these Insects and their subversive, insidious influence on this Hemisphere…

there is only so much time….and it is always dripping away.

Another good example of more or less the same thing would be Karl May – roughly the German equivalent of Mark Twain. When I was growing up, there was still nothing wrong with his works, but in the last 2-3 decades, he is only ever mentioned as a ‘writer the Nazis liked’. Never mind the fact that he was probably more even-handed and less ‘racist’ than most of his English, American, French or other contemporaries and never even knew what a Nazi was, having died in 1911……

“Accusations of racism in Blyton’s books were first made by Lena Jeger in a Guardian article published in 1966. In the context of discussing possible moves to restrict publications inciting racial hatred, Jeger was critical of Blyton’s The Little Black Doll, published a few months earlier.[144] Sambo, the black doll of the title, is hated by his owner and other toys owing to his “ugly black face”, and runs away. A shower of “magic rain” washes his face clean, after which he is welcomed back home with his now pink face.[145] Jamaica Kincaid also considers the Noddy books to be “deeply racist” because of the blonde children and the black golliwogs.[146] In Blyton’s 1944 novel The Island of Adventure, a black servant named Jo-Jo is very intelligent, but is particularly cruel to the children.”

Jeger was critical of Blyton’s The Little Black Doll, published a few months earlier.[144] Sambo, the black doll of the title, is hated by his owner and other toys owing to his “ugly black face”,..
— 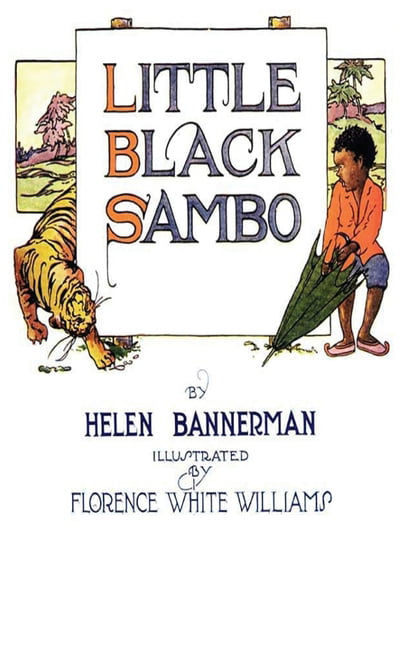 “Sambo, the black doll of the title, is hated by his owner and other toys owing to his ‘ugly black face,’ and runs away. A shower of ‘magic rain’ washes his face clean, after which he is welcomed back home with his now pink face.” That detail reminds me of an article published on this website in 2016, “Real Cleansing Power,” which discussed an astonishing Chinese advertisement for a brand of washing detergent. https://nationalvanguard.org/2016/06/real-cleansing-power/ The link for the advertisement in the article is dead, but a working link can be found here: https://www.youtube.com/watch?v=9hyzQBKFpVc Speaking of cleansing power, apparently many Americans once referred to Adolf Hitler as “The Dutch Cleanser.” In America’s Decline: The Education of a Conservative, Revilo P. Oliver wrote: “The comment that one heard so frequently under the… Read more »

Your youtube link on the Chinese anti-miscegenation commercial is very telling. That commercial came out in 2016 and two years later the the Supreme Peoples Court of China passed legislation banning Chinese women from marrying non-Chinese men. The western media never even touched this story which somewhat tells you that they don’t want European white countries to be influenced in any way by China. Either that or they’re afraid of some sort of backlash from China if it does. But today we could never even imagine the U.S. Supreme court upholding anti-miscegenation laws. Lincoln affirmed his belief in anti-miscegenation laws in America through his debate with Douglas and he assumed those laws would never change. But here we are in America where we see four out of five commercials on… Read more »

Everything the Jews employ to subvert us is done with the goal of DISTRACTING US while they plunder the nation and drain the US Treasury. Since we are all easily-duped sheep, we take the bait [racism, defund the police, transgenders, LGBTQ, etc etc,etc.] and allow ourselves to get tangled up in knots. Americans need to learn how to machete through the bullshit and get to what matters ; the THEFT OF OUR NATION’S MONEY. If we could cease this theft [which Trump succeeded in doing for 4yrs, which is why they hated him], we would be able to cut to the chase rather quickly and oust these gargantuan psychotic pilferers and pedos from our government. Hell, Putin did it, why can’t we ?

Well, it’s not as if actual Israel’s Jews are in any way hypocrites…they love falasha’s so much they stone them at demo’s…or deport them to Swedenistan.It’s who they are.

Back in the late 1950s (when I was very young), my mother read to me and my sisters from an old copy of one of the Snipp, Snapp, Snurr books by Maj Lindman. (I remember it as “Snipp, Snapp, Snurr and the Golden Slippers”, but I can’t find that title anywhere.) These books, written in the 1920s and translated into English in the 1930s, were about blonde Swedish triplet boys. A series on three blonde Swedish girls, Flicka, Ricka, and Dicka followed. The characters, illustrations and stories are wonderful. Copies can still be found online. You have to be careful in buying, though, because many children’s books have been edited in later versions to eliminate perceived sexism and racism.