Dr. William Pierce on the Difference between National Socialism and Fascism 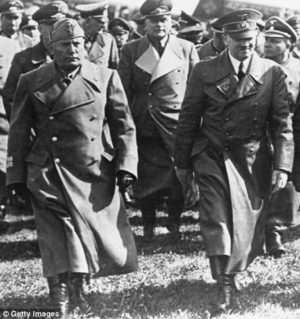 THE NOTION that the National-Socialism of Adolf Hitler is a type or variant of a more generally defined “fascism” is a staple of Marxist propaganda and analysis. Indeed, the Marxists have been so persistent and strident in making this false claim that it has infected the thinking even of some of those who claim to be NS themselves. (ILLUSTRATION: Benito Mussolini and Adolf Hitler in 1941)

Back in 1970, Dr. William L. Pierce addressed this issue in his column “Questions & Answers for National Socialists,” that appeared in WHITE POWER: The Newspaper of White Revolution, which was a mass distribution tabloid of the National Socialist White People’s Party. (Dr. Pierce is listed as the “Associate Editor” for the issue in which this particular column was printed.)

Q: Liberals often refer to National Socialists as “fascists.” Are they correct in this practice?

A: Liberals apply the label “fascist” to anyone whose ideas they find abhorrent or dangerous — even conservatives. They tend to use this term as a smear word, not restricting it to the adherents of any specific ideology. Thus, they probably feel as justified in trying to smear us with the label “fascist” as any other of their opponents.

Q: Well, is it proper for National Socialists to refer to themselves as “fascists?”

A: Certainly not. When we use the term we are virtually always referring to the adherents of the specific social-political doctrine on which Benito Mussolini founded his governmental system in Italy — that is Fascist with a capital “F.” Although it may not seem important to the liberal, there is a profound difference between National Socialism and Fascism.

Q: But I thought that both Fascism and National Socialism were highly centralized, authoritarian and strongly nationalistic forms of government, with only slight differences between the ways they operated.

A: You have been reading too many textbooks written by liberals. Certainly the Fascist state and the National Socialist movement are authoritarian, and they both have a strong social basis. Furthermore, both Adolf Hitler’s National Socialist government and Mussolini’s Fascist government administered most of their programs for national and social renewal on a centralized, nationwide basis. Both governments brought forth immense popular enthusiasm, which was manifested in numerous public demonstrations and celebrations. All these things contributed to a seeming similarity. But the differences betwen the two systems are by no means slight!

Q: What are some of these differences?

A: The really fundamental difference lies in the role of the state and the race under each system.

“The Fascist conception of the state is all-embracing: outside of it no human or spiritual values can exist, much less have any real worth. Thus understood, Fascism is totalitarian, and the Fascist state — a synthesis and a unit of all values — interprets, develops and potentiates the whole life of a people…It is not the nation that generates the state…Rather it is the state which creates the nation, conferring volition and, therefore, real life on a people…In the Fascist conception, the state is an absolute before which individuals and groups are relative…”

To the National Socialist, on the other hand, it is our Race, not the state, which is all-important. In Mein Kampf, Adolf Hitler wrote:

“The state is a means to an end. Its end lies in the preservation and advancement of a community of physically and spiritually similar creatures… States which do not serve this purpose are misbegotten monstrosities in fact.” (II:2)

There are many important consequences of this basic difference in attitudes. For example, under Fascism anyone, regardless of racial background can be a citizen, as long as he accepts his responsibility to the state. Under National Socialism, on the other hand, membership in the racial community is the first requirement of citizenship. (Source: WHITE POWER: The Newspaper of White Revolution, number 11, January-February 1970, p. 5)

Apart from theoretical considerations that Dr. Pierce discusses, historically Fascism was notoriously weak on the crucial issues of Race and the Jewish Question. This is true both of Mussolini’s original and of knock-off copies, such as that of Sir Oswald Mosely.

From 1914 through 1935, Mussolini’s mistress, confidant and political advisor was Margherita Sarfatti, a wealthy Italian Jewish intellectual. She undoubtedly influenced Fascist doctrine and policies during this period, and was probably responsible for the Duce’s initial hostility to National-Socialism and the Hitler movement.

A more public example of Fascist policy is the 1935 invasion and subsequent conquest of Ethiopia by the Italians. This action is absolutely unjustifiable from National-Socialist standpoint. Apart from all other criticisms, the end result of bringing tens of millions of Ethiopians into Mussolini’s neo-Roman empire would have been a disastrous racial contamination of the Italian bloodline. Even with the most stringent laws against miscegenation, Negro genes would have inevitably drifted into the Italian gene pool over time, and thence to all of Aryan Europe.

I am aware that the attitudes and policies towards Race and the Jews were markedly better during the second incarnation of Fascism, that of the Italian Social Republic of 1944-45. Under pressure from the Germans, either direct or indirect, the Fascists made an attempt to bring themelves into line with the Hitlerian New Order. But it was too little, too late.

On the fringes of the Fascist movement, Baron Julius Evola (1898-1974) made an effort to provide Fascism with an ideological racial underpinning, but his effort fell way short of what was needed. Evola’s theories are based on a “spiritual” racialism that is at odds with National-Socialist scientific, biological racialism. At the instruction of Heinrich Himmler, Evola’s theories were investigated by the SS and formally rejected as non-NS.

I know that there are some in the Movement who want to define Fascism more broadly, and include as “small-f” fascists, including all sorts of parallel movements from the 1930s and 1940s, such as the Falangists in Spain, the Arrow Cross movement in Hungary, the Legion of the Archangel Michael in Romania and Vidkun Quisling’s Nasjonal Sammling in Norway. Despite some superficial similarities, each of these movements was ideologically distinct from the others — and miles apart from the Hitler movement. Each country produced its own form of national regeneration, based on its own unique historical experience and immediate political needs. Whatever justification for existence these movements may have had in the pre-1945 world, in the post-War era they have none, for only an international, pan-Aryanist Hitler movement provides the way foward for our Race in the 21st century.

Early — From the early 1960s through the assassination of Lincoln Rockwell in 1967. During this period, he served as a consultant to Commander Rockwell, and produced the first issues of National Socialist World, but otherwise his active involvement in the Movement was minimal.
Middle — From 1968 to 1970, Dr. Pierce played an active role in the National Socialist White People’s Party, of which he was a member and leading officer, and of the World Union of National Socialists, of which he was the General Secretary.
Late — Following his dismissal from the NSWPP and WUNS in 1970, he took over and then re-molded the National Youth Alliance, which he later renamed the National Alliance. During this long and productive period of Movement involvement, he authored four books, made numerous American Dissident Voices broadcasts, gave innumerable speeches and wrote countless articles, essays and editorials.

There is no discontinuity in ideological content between what Pierce first wrote in National Socialist World in 1966 and his American Dissident Voices broadcasts of 2002. Rather, his words comprise a seamless whole, from the beginning of his involvement with the American Nazi Party to the end of his life. I consider everything that William Pierce produced to be an integral and important part of American National-Socialism, no matter what the period was in which he produced it.

A Bridge Too Far
Brainwashing Our Children
What Kind of Socialism is National-Socialism? What are the Alternatives?
Thoughts on Adolf Hitler, JdF 133
Special Treatment
White Racial-Nationalism contra Imperialism
Immigration: Not About Race?
In Your Ear, Mr. Clinton!
Tags:Adolf HitlerBenito MussoliniDr. William L. PierceFascismJames HartingJewish QuestionNational SocialismRace

A Drive Through the Empire

Building Our Community of Consciousness

Dr. William Pierce on the Difference between National Socialism and Fascism