Composite Greeks: the Ancient and the Modern 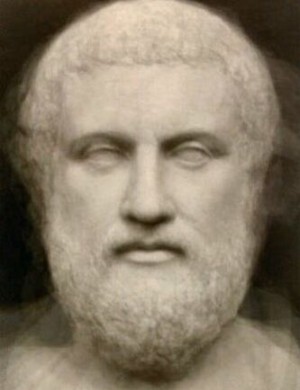 It is well known that genes recombine in each generation creating unique combinations. This is why “no two people look alike.” This, however, does not apply only to our contemporaries, but also to our ancestors: each of us is unique when compared to both.

It is a fairly reasonable assumption though that if two populations are genetically similar, i.e., they have similar distributions of alleles, then their average human types will also be similar. If we find these to be divergent then we can be sure that we are dealing with different populations. If, however, we find them to be the same, then we have an important piece of evidence in support of genetic similarity, perhaps the best indication of racial continuity which we can hope for until such time as DNA analysis of ancient remains can become a reality.

To test whether ancient and modern Greeks look alike, I created averaged faces of 16 modern Greeks (foootball players from the 2002-2003 Champions League) and of 16 ancient Greeks (from extant marble portraits), using Morpher, a software package for morphing. The composites were created by pairwise averaging, i.e., 16 initial portraits led to 8 pairwise ones, then to 4, 2 and finally a single composite. The results are shown below:

One needs to discount the differences due to the absence of pigmentation in ancient marble portraits, as well as the preference for beards in ancient times and for their absence in modern ones. With these caveats in mind, we observe the close similarity of the two composites, with noticeably squarish face, lowness of subnasal region, squarish eye sockets, high leptorrhine nose, robust cheekbones and various other subjective features. To further test the similarity of the two, the two portraits were aligned and the corresponding landmarks were joined:

A further composite image was created with the left side taken from the ancient average and the right one taken from the modern one. This further illustrates the correspondence between the two.

From the near perfect alignment we conclude that there is remarkable metrical similarity between the two composites, as our intuition suggested, with near-perfect alignment of all physiognomic landmarks.

This study is not intended to prove that the first notion, that “modern Greeks look like ancient ones,” is correct. It does however make this notion much more likely, in conjunction with the other anthropological, historical and ethnographic pieces of evidence for genetic continuity in the Aegean basin.

Read the original article at the Anthropological Research Page

Anthony Ludovici: Conservative From Another World

Genetically the greeks cluster around other European nations. They are right inbetween northern Europeans and Basques. There genetics would be very similar to Ireland and Wales as there are plenty of dark haired people there-plus many modern day northern greeks especially Macedonian Hellenes-still have an abundance of Nordic features although the majority is mediteranean, nevertheless subracialism has been genetically debunked and it is even a know fact it did not really affect Nazi politics. Only a tactic jews use to deter more people from Eurocentric ethnocentricism. In fact one of Hitlers favourite artists arno breker married a greek woman-http://ethniko.net/blog/demetra-messala/-and in her younger days she modelled for him. In this article they say alfred Rosenberg thought she was a jew but that’s not proven plus its quite laughable so why would… Read more »

Hitler stated that regretted having to invade Greece because he regarded himself as an ‘Hellene’, someone who benefited from Greek culture.

Yes.
A. Hitler was an admirer of Classical Hellas and the life attitudes of the Hellenic societies of yesteryear.

I am a Hellene. Unfortunately I cannot be as proud as A.Hitler was for a great number of greeks within the greek society, of today.

I believe the last remark of your comment was intended as a salutation.
Meaning you attempted to express the phrase, “thank very much” in the Hellenic language.

It is better pronounced like this:
Thank you = “efharisto”
very much = “poli”

Have a good year my friend.

Thanks for the correction! I was writing from memory and phoenetically. Obviously I never heard “efharisto” correctly when I listened to my Greek friends.

Greetings there,
No worries I’m glad to help and it is an honor to me as a Hellene to meet persons who still keep a a good image of my people in their heart.

I’m in the process of reading your article.

>Macedonian Hellenes-still have an abundance of Nordic features
Aren’t modern Macedonians pretty much slavs?
Isn’t that the whole issue with the FYROM and North Macedonia names?

>it is even a known fact it did not really affect Nazi politics.
Yeah, the whole Nordic aesthetic thing was pretty much an abstract goal, IE –
“with eugenics, all Germans could look like this one day!”*shows pictures of beautiful blond haired , blue eyed women*

The whole Generalplan OST propaganda bit is complete garbage.
If the Germans really saw the people in the occupied territories as “subhuman”, there most definitely would not have been so much sexual fraternization.
I read somewhere that there were at least 2 million half german babies born in the german areas of operations.

Yes it is not entirely though. There are two acts that were played back pre 2nd ww and after the 2nd ww. When Tito a communist and a half jew came to power he managed former Yugoslavia in the same format as the old USSR, that is he forced people from different countries, Slovenia, Croatia, Montenegro, Serbia to co exist and he re arranged the maps of those countries and their borders. He then did another commie thing. He sowed the seeds for future claims and conflict with Greece. The region they name these days northern “macedonia” (by the way we, Hellenic peoples, name that region Makedonia, we do not use the Cyrillic “c” letter) – we in Byzantine times educated the Slavs and gave them a Slavic version of… Read more »

To test the validity of this approach, the same procedure should be applied to various populations, then see whether and by how much the differences between the ancient bust modeling and any given modern population image composite are superior to that of this comparison.

correct. A proper study requires a larger pool of test subject/material so as to authenticate the result. (I hope I am not overstepping my mark with all the posting bellow – if I am I apologize) “Purple Griffin” please take a look at these articles – just a sample: https://duckduckgo.com/?q=Europe+is+the+birth+place+of+mankind&t=ffnt&atb=v186-4__&ia=web Europe was the birthplace of mankind, not Africa, scientists find https://www.telegraph.co.uk/science/2017/05/22/europe-birthplace-mankind-not-africa-scientists-find/ https://duckduckgo.com/?q=continuanance+greek+dna&t=ffnt&atb=v186-4__ ΜΕΓΑΛΗ ΕΡΕΥΝΑ ΣΟΚ ΣΤΟ ΕΛΛΗΝΙΚΟ DNA :Greek DNA Detailed Analysis of the Genetic Results for the Greek Population Christos Karatzios, Costas D. Triantaphyllidis. Multiple Autosomal Gene Markers In the “The History and Geography of Human Genes” Cavalli-Sforza, Menozzi and Piazza (47)grouped Greeks with other European and Mediterranean populations based on 88 to 120 loci (FIG.22. ,FIG.23 , FIG.24 ). Furthermore in this analysis of Europeans based on 88… Read more »

Composite Greeks: the Ancient and the Modern