Kristallnacht as a Jewish False-Flag Operation 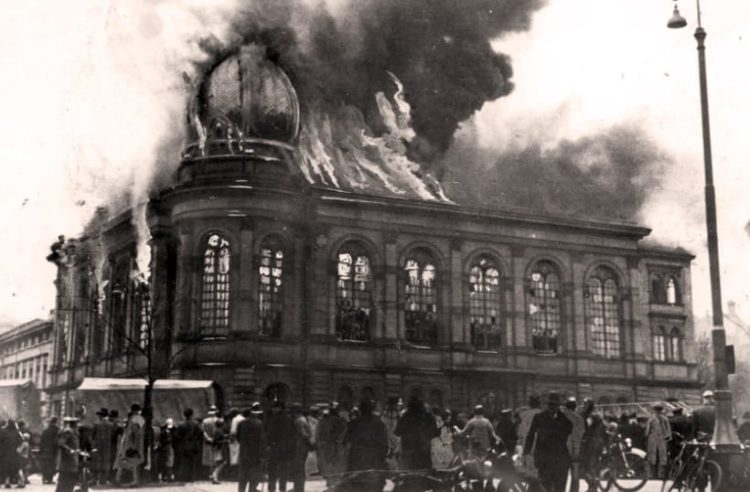 [The audio clip contains some raw language; it should not be played by or in the presence of children. — Ed.]

Points 1 and 2 are indisputable. Point 3 is somewhat speculative, but it answers the question of how violence could erupt throughout Germany all at once, contrary to the interests of the German government, without any organizing factor in view.

Of course, there must have been many German people angry at the Jews, not only for the assassination of their diplomat but for the hardships of the worldwide boycott against Germany organized by the World Jewish Congress in 1936. At the same time, however, riots do not erupt simultaneously in many places without organized instigation.

In the aftermath of Kristallnacht, the National-Socialist government made an effort to prevent repetition of such an event. Since Kristallnacht seemed to be an expression of the German people’s rage against the Jewish presence and especially Jewish commercial strength in Germany, the government sought to placate that rage and to prevent another such outburst. First, a large fine was imposed on Germany’s Jewish population to pay the cost of repairs. The National-Socialist government then bought Jewish-owned businesses so that they could be placed under non-Jewish ownership (aryanized), so that there would no longer be large numbers of Jewish-owned shops to provoke resentment. Under the Rublee Plan, adopted several months after Kristallnacht, every Jew under the age of 45 was expected to emigrate, and Jews who could not afford to emigrate received financial assistance to make it possible.

America Under the Jews' Heel: A Frankenstein Monster of Kitsch and Sanctimony

War by deception. Lies are the Jews’ plows and causing war among the ‘goyim’ is their harvest. Our devastation is their elevation.

This is an excellent view. I am now reading Irving’s
“Hitler’s War,” that the view is consistent with what
I have read so far. Why do the Jews hate Irving
with such a passion? At this point, I do not know.
However, I do know that when Jews jump all over
something the way they have on Irving, it tells me
the British historian must be onto something…..

I hear what Hadding is saying regarding “non-violence”. Yet, the only alternative to that is “negotiation” or “voting” or “compromise”. I’m sorry, but you cannot compromise with the children of the adversary… nor can you live side-by-side with them in some pseudo dual state. They will ALWAYS strive to thwart and destroy you – for that is their essence. Therefore, “violence” in some sort or other is inevitable against them if we are to survive and thrive as a species… period.

Norman de Geurre has a point.

Seeing through the broken windows: Hitler’s provocation for Kristalnacht Truthweed Ingrid Weckert’s research paper, ‘Crystal Night’ 1938: The great Anti-German spectacle’, presented to the Sixth International Revisionist Conference, exposes many factual inconsistencies in the orthodox version that blames either Hitler or Goebels for Kristalnacht in 1938. In fact, after their recent highly successful Olympic Games, they were appalled at the damage to Germany’s trade and its growing reputation as a tourist destination. They, the SA and police acted to prevent further destruction and to arrest the participants. Weckert mentions agent provocateurs stirring mobs against Jewish properties, making telephone calls under assumed identities to give false orders to attack Jewish properties, and includes an incident where ignorant men in bogus SS uniforms ordered an SA leader to arrest Jews – a… Read more »

David Irving is controlled opposition. He lost his Holocaust Libel trial on purpose. Also, he opposed Ingrid Weckert on this issue. She proves it was a false flag op. And since then, we had the USS Liberty attack, 9-11 , Charlie Hebno.. As ex Mossad whistleblowers prove, they make war by deception. How many times have Jew been caught spray painting swastikas on Synagogues, etc, just before some Jewish Legislation?

Greetings Dennis, I suspect that no Nazi has ever been discovered applying a swastika to anything jewish.

Ingrid Weckert leaves ambiguous ending to her later book , Feuer Zeichen, Obviously the little jew , who murdered von Rath was to provoke the “Kristall Nacht” as retaliation from civilians. But few knew about anything and the Reiches behaviour is so diplomatic, they violated their own laws.
If numerology interest you peculiarity of the jew the infamous destruction of WTC is synonymous with 9-11. Kristall Nacht was November but in Germany the date precedes the month and is documented, 9-11.
ANother provocative assassin ,David Frankfurther murdered Wilhelm Gustloff who was born in Stettin January 30, 1890 . The eponymous WIlhelm Gustloff KdF ship was torpedoed and sunk Januar 30 1945 . The mystery is still being covered by god’s chosen.

According to the book Unfinished Victory – by 1938 jews were less than 1% of the population and still owned over 33% of real property in Germany – thats the problem.

How does that happen and what kind of resentment does it stir?

Kristallnacht as a Jewish False-Flag Operation