There Really Are Conspiracies, But This Isn’t One of Them

IN THIS VIDEO, writer and director S.G. Collins of Postwar Media examines the theory that the Apollo Moon landings could have been faked in a studio — either by Stanley Kubrick or by anyone else. Collins looks at the theory from a different, seldom-discussed perspective: Being an expert in video and film technology, he examines the capabilities of even the best, cutting edge gear available in that field in the late 1960s — showing us that the alleged fraud was simply not possible.

Collins acknowledges that — as National Vanguard readers well know — the US government lies all the time. But it is not in our interest to concentrate on irrelevant or concocted conspiracies, whether put forward by earnest amateurs or by paid Cointelpro-type agents. These muddy the waters, take away our credibility, waste our time and energy, and lessen our chances of defeating the very real conspiracy to commit genocide against our race.

Honor, at Last: Scientist Refuses to License Bioinformatics Program on Racial Grounds
The Jewish War Against Werner Heisenberg
The Lost Ancient Patrimony of the White Race
Sometimes Reality Writes the Memes for Us
James Watson and The Economist magazine
Energy for a Future Star-Spanning White Civilization
Stripped-Down Synthetic Organism Has Smallest Genome Yet
WOTAN of NASA
Tags:Moon landingsScienceTechnology

“Being an expert in video and film technology, he examines the capabilities of even the best, cutting edge gear available in that field in the late 1960s — showing us that the alleged fraud was simply not possible.”
Anyone with one functioning brain cell know’s NO man has ever set foot on the moon. Wake the hell up and quit accepting the blatant lies you are fed.
http://www.aulis.com/index.html

Yeah sure!… Guess you believe also that the Earth is flat, that Nuclear Weapons do not exist…and the Earth is just 5000 years old, and that Outer Space does not exist either!… LMAO!!

No ass hat, I just haven’t lost my ability for critical thinking. Someday when you grow up, maybe you will come to realize Santa Claus, the Tooth Fairy, the Easter Bunny, and the Moon Landing’s are all fairy tales.

Let’s all try to not make it personal, please.

LOL, I find this more believable than the “Landing’s”.
https://www.youtube.com/watch?v=4yUZvaM2c6M

as a so called expert,he never brings up the fact that are are no stars in any pics or that their is no blast crater under the luner lander,and the flag waving on the moon with no atmosphere,ect,ect.

There is a somewhat vague explanation in the second part of this article:
https://www.forbes.com/sites/jillianscudder/2017/06/16/astroquizzical-van-allen-belts-barrier-spaceflight/

The first things that come to mind viewing this video are: Why is this fellow fat? Why is he ugly? Why is his appearance sloppy? What is that silly knit cap hiding? Why the smarmy, arrogant demeanor? Who is S.G. Collins anyway? A visit to his website, postwar.nl may provide some clues. He claims to be a filmmaker producing short films and provides samples of his work, which prove to be of the “trendy,” “progessive,” ugly, counterculture genre. That’s the first clue. He also writes novels, and provides blurbs, e.g., “Anne who lives — (fiction) As a young girl, she spent three years in hiding from the Nazis. As an old woman, she helps a young one escape from an abusive boyfriend, and must choose between safety and truth. In… Read more »

I hold no brief for Collins, and whatever personal problems he might have are unknown to me. But, as a broadcast engineer, I find his technical argument persuasive. I don’t regard this short film as vicious or insulting or advancing the cause of the enemy. It’s helpful if it keeps good White folks from becoming sidetracked in time-wasting, credibility-harming conspiracy drama. As for the technical workarounds you discuss: A film recording, transferred to video via kinescope, with zero film artifacts — in 1969? A freeze frame that didn’t instantly jump out at you as unnatural, with some of its video noise frozen too? In ’69? I don’t find those scenarios believable. Another thing that makes me think that the Apollo operation was not a hoax is the extreme difficulty of… Read more »

““Being an expert in video and film technology, he examines the capabilities of even the best, cutting edge gear available in that field in the late 1960s — showing us that the alleged fraud was simply not possible.”
Actually, it is the other way around. This was why any and all photography on the moon was impossible with the equipment and technology of the 60’s. Plus all of NASA’s ORIGINAL film and telemetry data has been lost. The greatest technological feat in the history of man and all the real proof was “misplaced” by NASA. ROLMFAO.
http://www.aulis.com/moon_pt1.htm

Wait up! I want to have fun too.

The Druid dressed in robe complete with hood carried in his hand a wand made from the wood of a Holly tree. Ol’ Wizard. Hence we have Hollywood with its tricks and magic.

Southern Fried TRICK PHOTOGRAPHY. Note the flat earth. How many trillions would the Federals expend to remove this:

Judging by some of the respondents here, are we then to assume that rocket scientist and former Schutzstaffel major Wernher von Braun was in on the hoax too? Or was he a figment of the US government as well?

As a non-technical person I can only ask : in the 1960s technology was far enough evolved to fly to the moon and back but not far enough to fake it in the studio ? Which is more difficult ? And why with our present technology, which is far more evolved than that of the 1960s, have we never gone back to the moon ? If I remember correctly, NASA has inadvertently admitted that it still has not yet solved the problem of flying through the deadly Van Allen Belt. The reason why some people refuse to accept the possibility that the moon landings were faked is that they see them as a supreme achievement of the White man’s “Faustian Spirit”. David Duke for example is of that mind set.… Read more »

As a technical person, I can give you some analogies: Which would be more difficult, climbing Mt. Washington, or faking a detailed documentary livestream that purports to show that you did climb Mt. Washington involving 1,000-plus technicians, hundreds of engineers, hundreds of scientists, and innumerable contractors, many of whom would be eyewitnesses to much of the climb — and inviting journalists and writers worldwide to watch and write about it? Both would be difficult, granted, but the fake — which, if you based your career in a competitive field and reputation on it, would be subject to intense scrutiny — would be, I think, considerably more difficult. No one doubts that the Apollo missions were under intense scrutiny by foreign intelligence services, and the US government of the 1960s was… Read more »

Conspiracies involving a mass of people already happened in history. D-Day and the construction of the Atom bomb come to mind. Those were conspiracies to keep the project secret, not to fake it, but still mass conspiracies they were. In a fake conspiracy the lower ranks of the project need only partial information and can be cheated easily. The higher ranks are bribed and threatened to cooperate.

Again after the so-called moon landings no astronauts have ever flown into the deadly Van Allen Belt. That problem has never been solved.

A Nonymous
Reply to  Franklin Ryckaert

What about the “Holocaust” industry? Countless people are involved in an industry perpetuating the myth that Hitler is responsible for the death of 6,000,000 people. Sure, the majority of those people probably believe the “Holocaust” myth themselves… which is precisely how such a big hoax can persist after so many decades. I do have a technical background, and I also fail to grasp how it was possible with the primitive technology of the 1960s to reach the moon, when we have an astronaut like Don Pettit acknowledging that it’s not possible to go the moon (anymore) with modern day technology. This simply doesn’t add up. And that’s just the tip of the iceberg. See “A Funny Thing Happened on the Way to the Moon” for some other arguments supporting the… Read more »

“…So if Hollywood (and Kubrick) were behind making “faked” moon landings for NASA and the American public, then why aren’t they as stunning and technically competent (at least) as the actual fake lunar vistas Kubrick and crew created..? “

Without the cost of demanding, violent negroes and latinos imposed by the jewish media, law and academia lording over public opinion and the political process, we’d have Mars bases by now. We’d have the means to properly address climate change and ocean pollution. Maybe a great innovator like Paul Allen would’ve had a cure for his lymphoma since more university research dollars could go toward medical investigation instead of the feelgood agenda items like unearthing the negroid origins of ancient Egypt and similar nonsense.

another simple truth is us and Russia were locked in a space race.russia put first satellite and man into orbit.us goes to the moon a bunch of times and Russia never follows to plant their flag next to us flag,why?because Russia knew you could not go to the moon,thats why they never went.this is called critical thinking,which most white americans have lost.

“I’d go to the moon in a nanosecond. The problem is we don’t have the technology to do that anymore. We used to but we destroyed that technology and it’s a painful process to build it back again.” — Don Pettit, NASA Astronaut Ever since I saw Bart Sibrel’s “A Funny Thing Happened On The Way To The Moon”, I lean towards not believing any moon landings took place, as I find his arguments pretty convincing. Even before I saw that documentary, it always struck me as odd that we don’t seem to have the technology to go to the moon today (anymore), whereas it seemed possible on the first try during the 1960’s, even though their technology was pretty primitive by modern day standards. Still, I can’t explain why… Read more »

Why the Soviet Union conceded While Soviet experts were sorting out this hoax, it had become a part of the social psyche. So any rebuttal could only be achieved by referring to photographs and the TV coverage of the Apollo landing sites. The top Soviet leadership was faced with a dilemma – to go to considerable effort to gather evidence and then publicly prove the illusory nature of the Apollo Space Project, or to keep silent by agreeing to the US geopolitical exchange. In the first case, the parties were facing a military conflict, at least a strike on the Soviet space infrastructure. Under no circumstances could the US allow the truth to come out, as in this case instead of triumph, the country would run into ontological catastrophe: their… Read more »

HOAX: Phony commie scare (Cold War) as an excuse to build up the ‘military industrial complex’ and train White children to be 14th amendment police state citizens. Ironically those kids grew up to be the last White revolutionaries in North America. They went outside and everything!

Duck and Cover campaign: Let’s tell the kids that the Russians are going to drop an atomic bomb on their elementary school. They can Crawl in Silence under the desk. 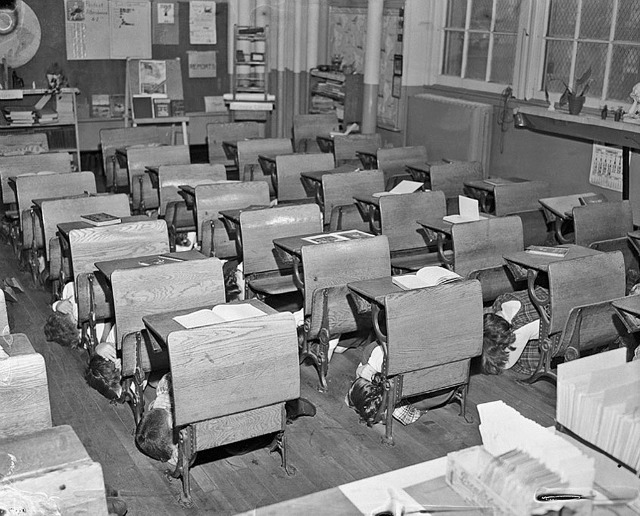 The body bags weren’t coming home fast enough so the Federals shot to death unarmed students at Kent State (mean ol’ duck and cover kids/Boomers) for having the audacity to demonstrate against the expansion of the Vietnam war into Cambodia.

There Really Are Conspiracies, But This Isn’t One of Them