HERE IS a preliminary look at some of Donald J. Trump’s Jewish advisers, their views, and possible roles in his administration. 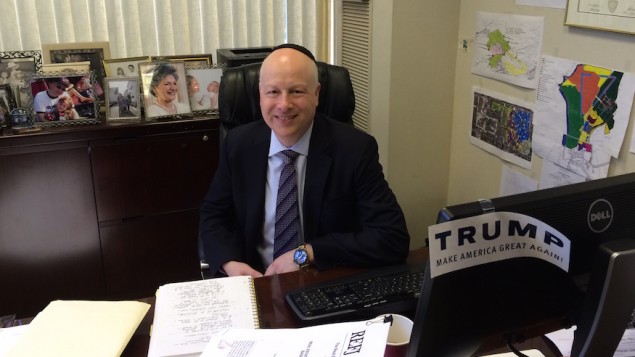 Greenblatt has worked as a real-estate lawyer for Trump for 19 years, and he is one of two Jewish lawyers whom Trump has said he would appoint as his Israel advisers. An Orthodox Jew and Yeshiva University graduate, Greenblatt studied at a West Bank yeshiva in the mid-1980s and even did armed guard duty there.

The father of six from Teaneck, New Jersey, does not have any political experience. Greenblatt has said he speaks with people involved in the Israeli government but has not spoken to any Palestinians since his yeshiva studies. He has cited the American Israel Public Affairs Committee as one of his main sources for staying informed about the Jewish state, and helped draft Trump’s speech at the lobbying group’s annual conference in March.

Greenblatt, who has said he supports the two-state solution, has implied that Trump will take a more laissez-faire approach to peace building.

“He is not going to impose any solution on Israel,” Greenblatt told Israel’s Army Radio last week. He also said that Trump “does not view Jewish settlements as an obstacle to peace.”

Alongside Greenblatt, Trump named Friedman, 57, as an Israel adviser. Friedman, a bankruptcy expert and partner at the Kasowitz law firm in New York, is the president-elect’s longtime attorney. The son of a Conservative rabbi with a family history of ties to Republican presidential candidates — his family hosted Ronald Reagan for a Shabbat lunch in 1984, the year he won re-election — Friedman lives in Woodmere, New York, and owns a house in Jerusalem’s Talbiyeh neighborhood, according to Haaretz.

“The two-state solution might be one answer, but I don’t think it’s the only answer anymore,” he said in July.

Friedman has also said that annexing the West Bank would not damage Israel’s status as a Jewish state.

Kushner — the 35-year-old scion of one of New York’s most prominent real estate families and, since 2009, the husband of Trump’s daughter Ivanka — played a crucial role in the president-elect’s campaign, especially with regards to Israel. He worked on Trump’s speech to the AIPAC annual policy conference that earned Trump a standing ovation, and helped plan a trip to Israel for his father-in-law last year. (Trump canceled the trip after Israeli Prime Minister Benjamin Netanyahu slammed his call to ban Muslim immigration to the United States.)

Trump appears to be smitten with Kushner, often referring to his “fantastic” son-in-law when boasting of his pro-Israel credentials. Kushner, an Orthodox Jew who lives with his wife and their three children on the Upper East Side of Manhattan, may have become a household name during the campaign, but he’s no stranger to the limelight. In 2006, at 25, he bought the Observer newspaper. Two years later he became CEO of his father’s company, Kushner Properties, four years after his father was sent to jail for tax evasion, illegal campaign donations and witness tampering. In 2015, Fortune named Kushner to its 40 Under 40 list, its “annual ranking of the most influential young people in business.”

Trump’s daughter Ivanka, 35, who converted to Orthodox Judaism, has served as the polished, softer face of her father’s campaign. A successful businesswoman whose brand is centered around empowering working women, she stood by him when recordings were released that caught the president-elect bragging about sexually assaulting women.

Ivanka has reportedly tried — not always successfully — to have her father tone down or walk back some of his most inflammatory remarks, including having called Mexican immigrants rapists, according to New York magazine.

She is the founder of the Ivanka Trump Collection, a fashion and lifestyle brand, and serves as executive vice president of development and acquisitions for the Trump Organization, her father’s company. Ivanka, who gave birth to her third child in March, belongs to the Upper East Side Orthodox synagogue Kehilath Jeshurun with Kushner and has described her family as “pretty observant.” She made Fortune’s 40 Under 40 list in 2014, a year before her husband did.

Epshteyn, 34, is a Republican political strategist and staunch defender of Trump who has appeared as the president-elect’s surrogate on major TV networks over 100 times, The New York Times reported.

A New York-based investment banker and finance attorney, Epshteyn worked as a communications aide for Sen. John McCain’s presidential campaign in 2008, focusing his efforts on the Arizona senator’s running mate, then-Alaska Gov. Sarah Palin, whom Trump is reportedly considering for interior secretary, according to Politico.

Epshteyn, a Moscow native, moved to the United States in 1993. A fluent Russian speaker who has moderated a panel encouraging investment in Moscow, he may serve as an asset for Trump in navigating relations with Russia — Trump has expressed his desire to improve ties with President Vladimir Putin.

Then again, Epshteyn’s temper may make him less of an asset to Trump. TV hosts described him as “very combative” and “abrasive,” and in 2014, Epshteyn was charged with misdemeanor assault after he was involved in a bar tussle. The charge was dropped after Epshteyn agreed to undergo anger management training and perform community service.

Miller, 30, has played a crucial role in Trump’s campaign, helping to warm up crowds at rallies and drafting speeches, including the president-elect’s acceptance speech at the Republican National Convention.

Miller, who has described himself as “a practicing Jew,” joined the Trump campaign in January, quickly rising through the ranks to become “one of the most important people in the campaign,” as Trump’s campaign manager told The Wall Street Journal. Previously he worked for seven years as an aide to Sen. Jeff Sessions, R-Ala., helping the lawmaker draft materials to kill a bipartisan Senate immigration reform bill. Some of Sessions’ arguments contain similarities to Trump’s harsh and often controversial statements on the issue, such as calling for building a wall on the Mexican border and banning Muslim immigration to the country.

Though Miller grew up in a liberal Jewish home in Southern California, he was drawn to conservative causes early. As a high school student he wrote a letter to the editor of a local paper in which he slammed his school for providing free condoms to students and for making announcements both in English and Spanish, among other things.

Mnuchin, a former Goldman Sachs executive, worked as Trump’s national finance chairman during the campaign with the aim of raising more than $1 billion for the candidate.

Trump and Mnuchin have been friends for 15 years, and prior to being in charge of Trump’s campaign finances, Mnuchin served as an adviser. Part of what The New York Times describes as one of Manhattan’s elite “most influential families,” Mnuchin and his father both got rich working at Goldman Sachs. The younger Mnuchin also co-founded the entertainment company RatPac-Dune Entertainment, which has worked on such Hollywood hits as “Avatar” and “Black Swan.”

Some saw Trump teaming up with Mnuchin as unusual, considering that the real-estate mogul had consistently bashed Goldman Sachs. But it didn’t seem to get in the way of a good working relationship — Trump is now reportedly considering Mnuchin for the position of Treasury secretary, according to Politico.

Eisenberg, the private equity chief for Granite Capital International Group, serves as finance chairman for the Republican National Committee. He was one of a small group of Republican Jewish Coalition board members who did not flee from Trump’s candidacy, and was a major contributor to groups backing Trump’s election — only nine of 55 RJC board members gave to Trump. Alongside Mnuchin, he worked to raise funds for the candidate.

Eisenberg grew up in New Jersey, the Forward reported, and he has been floated as a possible pick for commerce secretary in the Trump administration. He was the chairman of the Port Authority of New York and New Jersey at the time of the 9/11 terrorist attacks on the World Trade Center.

Glassner was not new to Republican presidential campaigns when Trump appointed him last year to serve as his national political director. He worked as director of vice presidential operations for McCain’s 2008 campaign and ran Geogre W. Bush’s campaign in Iowa in 2000. He has also worked with Palin and Sen. Bob Dole, a former presidential candidate.

Like many of Trump’s Jewish advisers, Glassner is outspoken in his support of Israel. Prior to joining the Trump campaign, he worked as the political director for AIPAC’s Southwest Regional. Glassner has praised the anti-establishment movement, and he told Jewish Insider that his experience with Palin and the fact that he lives in New Jersey, not Washington, D.C., made him a good fit for Trump’s political outsider message. He also served as a senior adviser to Eisenberg when he was the Port Authority chairman.

Thank you for this information. even if one may not vote for Pres. Elect he should feel better knowing he is protected by a kabal of Engels all well versed in subterfuge and treason , who will play their harps of Gold and sing praises to the Prince of Darkness.