BEFORE committing to any particular social model for space colonization, take notice that there are certain problems that mankind has not been able to solve in regard to demographics and the problems that arise from racial differences and from racial mixing.

Elon Musk is from South Africa. South Africa has had political troubles arising from the question of who should own the farmland. The same kind of trouble has arisen elsewhere, too; for example in Zimbabwe in the 1970s, and in Haiti around 1803. An unstable mixture of human beings resulted in civil war, sometimes to the point of genocide.

Likewise, it should be noted that in order to survive for long away from Earth, everyone must be sufficiently intelligent, resourceful, and well-behaved. And that is true not only for the original colonists, but also for their children, grandchildren, and for all the generations to come. You can always cherry-pick the first generation of colonists, but the children they bear will tend to regress back to their racial averages as time goes by.

Just now, politics favors gambling with racial mixture. But that gamble looks to be a poor one. It would be an unreasonable risk to needlessly carry into space a human problem that can and should be left on Earth. Do you really want to recreate Chicago or Detroit on Mars? Or, rather, do you really want your space colonies to die as the result of incompetence, or neglect, or stupidity, or sabotage, or fighting?

If any race of people wants space colonies, then let them build their own rockets, let them launch their own astronauts, let them prove that they are worthy of having an extraterrestrial legacy of their own. If we enable them with a boost using our technology, then we’ll almost certainly find them a burden, or worse than a burden, after they arrive.

NASA said that it seeks to put the first “person of color” (probably a Black) on the Moon with its Artemis program. Racial Political Correctness has been elevated to a primary mission requirement, displacing merit and ability.

There have been strong hints in the aerospace industry that this isn’t a good idea. The James Webb Space Telescope, 14 years overdue and over budget by a factor of 20, has a Black project manager, Greg Johnson. Both of the Space Shuttle missions that ended in disaster and a complete loss of all seven astronauts (Challenger and Columbia) included a Black among the crew.

Whenever a Black goes into outer space, you may be sure that he was put there by White people. Whites can put anything at all into space: machines, animals, Blacks, people, etc. Putting Blacks into space is purely the result of “woke” politics, and it will lead, sooner or later, to a disaster that otherwise would not have happened. When the first rape happens in space, it will be a Black-on-White rape. On most of the occasions when incompetence causes loss of life in space, it will be a Black who will be found lacking.

Example. Neither the computer nor the radio works. You have two hours to compute a change-of-velocity maneuver (so much thrust for so much time in such-and-such direction). You would be much better off having a White man like Buzz Aldrin on the job than a Black man like Victor Glover.

Bringing Blacks along on space missions is asking for trouble, from low Black intelligence, from poor Black character, and from Black ill-will. We have an opportunity to leave all of the problems caused by racial animus behind us, and we are pretending that it is some sort of virtue not to take that opportunity.

The Detroit All Against All
Distractions and Psywar Weapons
A Race-Based Argument
Jews: Exempt From the Rules They Force on Us
Lying Figures
We Need Another Adolf Hitler
White People Pull Their Weight -- and the Weight of Others Too
Enabling a Mars Settlement Strategy with the Hercules Reusable Mars Lander
Tags:Black behaviorBlack intelligenceDavid SimsIntelligenceRace MixingSpace Exploration 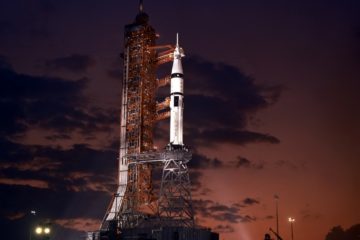 In all honesty we wont be going for space colonization ever as the jews and their pawns have no interest in exploring the unknowns of the universe. They seem perfectly content in fleecing their Kelergi mutt cattle on this little rock forever until their long and miserable existence comes to an end. They only have these “space explorations” as pretty little distractions and show for the fantastical naive dumbed down dysgenic goyim much like the bickering amongst the nations of the world and the wars in the middle east such as the victory of the Semitic (((Taliban))) in which ZOG propped up and financed for decades. Humanity will most likely never leave this planet as the the only race capable of doing this (whites) would have long since perished. The… Read more » 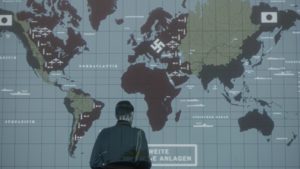 Blacks empowered at every level seem to pull mankind down into the muck, from Man’s greatest ideals into his worthless sins.

Howard
Reply to  KingVirzion The devout Disciple of Adolf Hitler

couldn’t have said it better …

My favorite Black Sabbath song of all time is INTO THE VOID. The lyrics hold truer now more than ever . . . Rocket engines burning fuel so fast Up into the night sky they blast Through the universe the engines whine Could it be the end of man and time? Back on earth the flame of life burns low Everywhere is misery and woe Pollution kills the air, the land and sea Man prepares to meet his destiny, yeah Rocket engines burning fuel so fast Up into the black sky so vast Burning metal through the atmosphere Earth remains in worry, hate and fear With the hateful battles raging on Rockets flying to the glowing sun Through the empires of eternal void Freedom from the final suicide Freedom fighters… Read more »

The diversity tumor (anti-white establishment) inoculated in the West by the parasite, already metastasizes. Solution, it must be separated from the body, which is still healthy. There is no political solution. 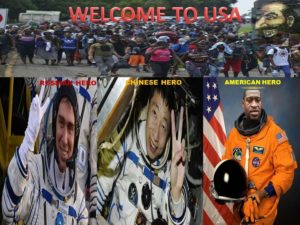 I’ve been a life-long fan of space exploration. It’s what encouraged me to become an engineer. But I hope the Atremis project fails or gets cancelled. Later, when we are economically, socially and racially healthy, we can resume where we left off. Actually, I think Artemis will get cancelled for budgetary reasons.I can’t believe they are going with Musk’s idea to land a tall vehicle on the lunar surface – a concept wisely rejected in the 1960s and the the stability problems haven’t changed. Plus it’s a vehicle that has to be refueled between 6 and 10 times for each mission. It may be practical for later landings when a suitable landing surface is prepared, but not for the first landings. I think technical problems and lawsuits will delay the… Read more »

.
Like Archer said : Black astronauts, rarer than a unicorn
.

I have empathy for people who can’t get themselves into space. But you don’t send people into space out of empathy.

Maybe they can come across Marvin the Martian! “He’d like to come and meet us, but he thinks he’d blow our minds “

Planet of the Apes.

That movie Elysium showed the stark reality of this dysgenic breeding debacle run by Zionists. The Earth is an overpopulated mass of brown and black sludge. The hero is a wigger criminal that sacrifices himself to send these losers to the last bastion of civilization, the space station Elysium.
You can see the enemy and its plan in its rancid sewer media. This is the fate of The World under the Jews. A massive hopeless ghetto of a few rich and billions of peons.
Globalism in a nutshell.
Rest assured. If these fake Hebrews try to colonize space and bring this genetic detritus with them, superior aliens will annihilate them and exterminate all life on this ball of dirt.

I’d rather lavish billions on space travel than squander them on Third-World poop-skins.